Nobody Deserves It More 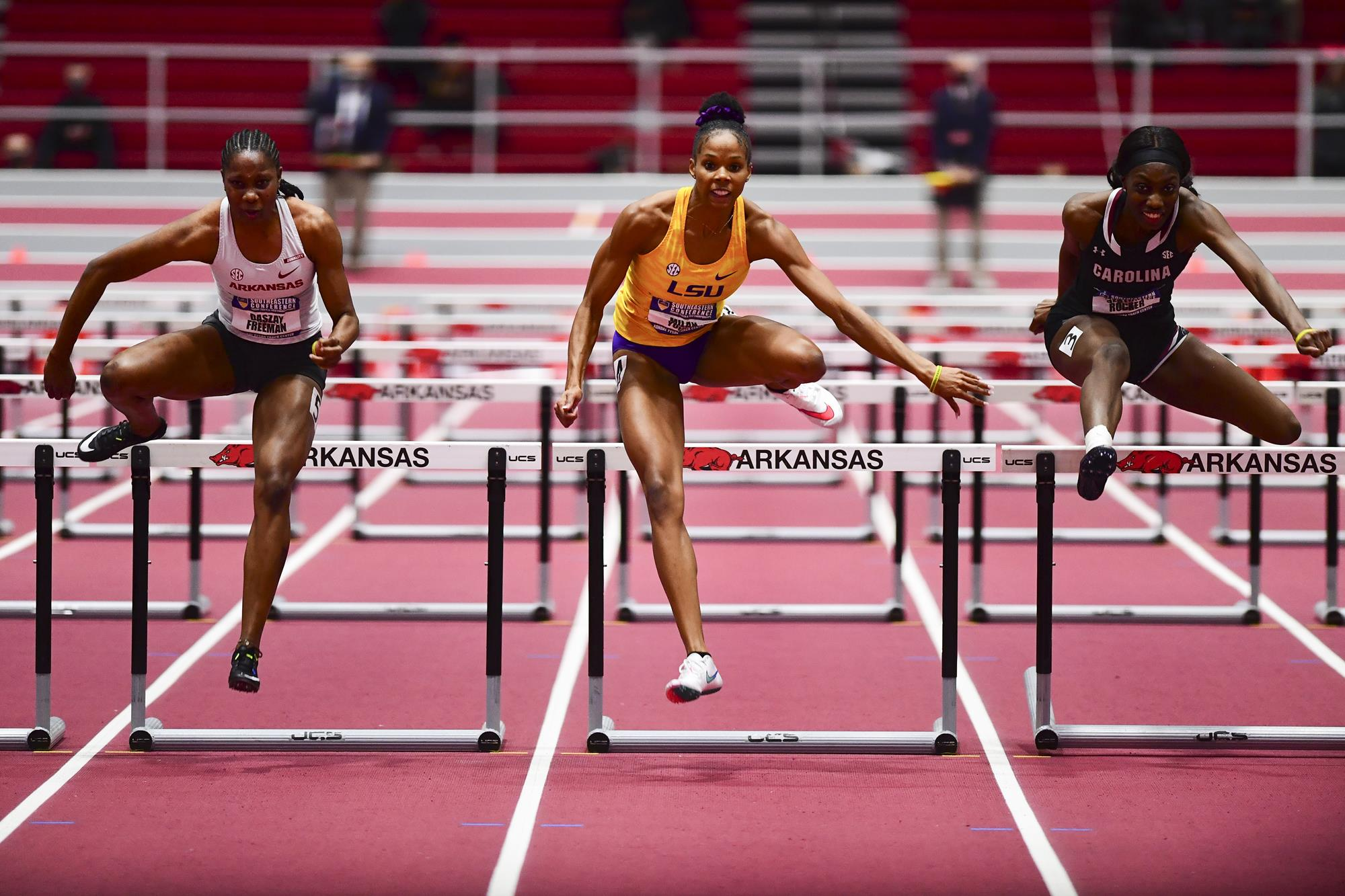 That would have been hard for Milan to envision in January of 2020 when she was sidelined with an injury that would keep her out of competition for up to a month.

Hard work, relentless dedication, and motivation from those around her paved the way for her to have an immensely successful 2021 indoor season. But it didn’t just happen with the snap of a finger. It was a process that took a copious amount of time and sacrifice all while dealing with a worldwide pandemic that ended collegiate track and field prematurely in 2020.

“All I could think about was SECs last year,” Young remembers. “I got hurt at the start of last season and it was just another obstacle for me. I had to regain my confidence and stay positive throughout the year.

“My dad kept me motivated. He offered me tons of support and encouraged me that if I stuck with it I could have a good 2021 season. Throughout the summer (of 2020) I just trained a whole bunch with my dad and sister. They pushed me, and we all knew that it was a possibility that we could have a 2021 season.”

The training paid dividends and she arrived back on campus in August ready to go for fall training. It helps when you train with people who are going to make you better and that’s just what the LSU women’s hurdle crew embodies. The Tigers have a crew of six hurdlers – Tonea Marshall, Jurnee Woodward, Brittley Humphrey, Alia Armstrong, Leah Phillips, Milan –  who motivate and push each other to be the best they can be in each practice.

“Every hurdle practice is competitive,” Young notes. “Every time you get in those blocks, it’s almost like an SEC final. We always provide constructive criticism to each other on how we can become better. We all want to be on the same page. We’re our own little unit; we all compete individually, but we are doing it for each other.”

Fast forward through fall training and the 2021 season was upon Milan and her teammates. She registered a PR in the opening meet of the season, the Purple Tiger Invitational, where she ran a 8.17 in the finals of the 60 meter hurdles to claim gold.

“Coming into this season I had bigger goals than I had the previous year. I just kept working and working. I wanted to come back and rebuild and rebrand myself. This is the true Milan.”

She’s been ever so consistent this indoor season with a plethora of times in the 8.1 or 8.2 range. She lowered her personal best to 8.14 on February 6 at the Charlie Thomas Invitational and she was primed for an even quicker time at SECs.

“Going into SECs, it was a mental thing for me. I knew that I had it in me and I had put the work in. I was practicing well and I was healthy going into the meet. It was a me versus me type thing. I knew that if I just executed to the best of my abilities I could get the job done. I just stayed confident in myself and I knew that God was going to guide me.”

She started SECs off with a PR of 8.08 to earn the top seed and earn a starting spot in lane four for finals the following day. She knew she was prepped and ready for the moment.

“I told myself to go out and just do it. Going into the first and second hurdle, it was kind of a blur. But once I cleared those two, I told myself to takeoff. I knew I was in control of the race, and then once I crossed the line I thought to myself ‘did I really just do this’? It shocked me a bit (when I saw my name at the top of the leaderboard) and I was so proud of myself and how I handled the moment.”

She looked up at the board. Milan Young. 8.03. First place. A feeling that she’ll never forget. And it added 10 points to the LSU’s women’s team total for final placement. She wasn’t done just yet. She had to recompose herself and prepare to run on LSU’s 4×400 meter relay that would take place less than an hour later. She ran the third leg on the relay squad that placed fourth overall with a season best time of 3:31.82 and earned a bid to the NCAA meet in the event.

“My versatility helps the team a lot I think. It just shows that I can bring a lot to the team and help us in a wide variety of events. I’m just happy to be there with my teammates and have the chance to score in a number of different disciplines.”

She wouldn’t be where she’s at without God, her family, her coaches, or her training partners and she’s so grateful for all of them.

“I do it for my parents and my family; they’ve given me the world so I try my best to give it back to them. I do it for God; he’s brought me through a lot and bringing me to this point. Just for the guidance through the trials I’ve been through. I’m so thankful to have a chance to compete with all these things going on.”

Milan and the LSU women’s track and field team will head to the NCAA Indoor Championships ranked sixth in the nation and after that its right on to outdoors. Expect big things from Milan and the rest of the LSU hurdles crew in the coming months.

“I’m excited for outdoors just solely because I know me and my teammates have been working hard. We have some lofty goals on our list, but I’m thrilled to see what we can accomplish outdoors and we’re ready for the opportunity.”