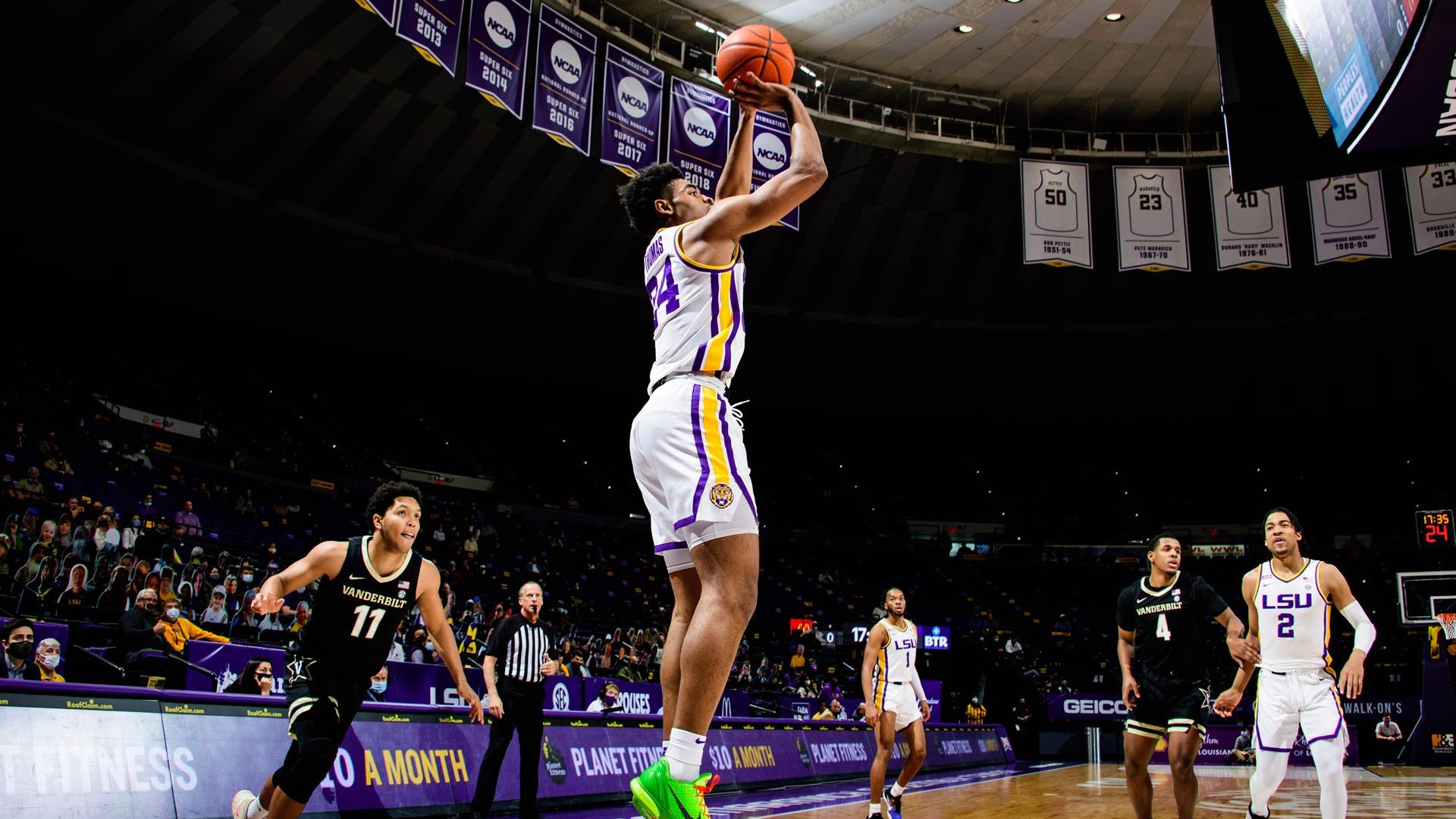 COLUMBIA, MISSOURI – The LSU Tigers had to battle through one of those six-minute games that Coach Will Wade talks about and the team answered the call at the end to score an 86-80 over Missouri Saturday afternoon at Mizzou Arena.

LSU finishes the somewhat shortened regular season with a 16-8 overall record and 11-6 in the SEC.

The win does several things for LSU. First it clinches the third seed in the Southeastern Conference Tournament. LSU will play its quarterfinal game on Friday night at approximately 8:15 p.m. at Bridgestone Arena in Nashville.

Secondly, the win gives LSU 39 SEC victories over the 2019, 2020 and 2021 seasons combined. That is more than any other SEC program in that same three-year period.

Also, LSU is the only school in the SEC to have clinched a spot in the league’s top four and received the double bye in each of the last three seasons.

Cameron Thomas led LSU with 29 points, his 10th consecutive game of 20 points or more. Thomas was 9-of-13 from the field with one trey and 10-of-12 from the free throw line. He drew 11 fouls in the contest.

Trendon Watford had 19 points, eight rebounds and four assists while Javonte Smart had 13 points and Darius Days 12 points and nine rebounds. LSU is 16-1 when he scores in double figures.

Missouri led for a lot of the first 15 minutes of the second half but was never able to pull away to more than six points at 63-57 with 9:32 to play.

That’s really when the six-minute game actually had to start as LSU worked to cut the game to 68-67 with 7:01 left as Smart grabbed a rebound and drove the floor for a bucket. Smart would get a steal and feed Thomas for a jump shot that gave LSU the lead back at 69-68.

The lead would change hands four times before Watford would get LSU the advantage at 74-73 on a driving layup. Mizzou missed a shot, Days would rebound and Cam Thomas would hit a three-pointer to give LSU a 77-73 lead with 3:25 to play.

Days would pick up is fifth foul shortly thereafter and the Tigers would have to play the last three minutes without him.

The teams traded several free throws and the game went to 80-76 in favor of LSU with 2:14 to play. Missouri then made two free throws and got possession off a flagrant foul. Mizzou would convert to tie the game at 80-80 with 1:20 to play.

Watford gave LSU the lead for good at 82-80 with a field goal in the paint and then after a Pinson miss, Watford grabbed the defensive rebound. After getting the ball into the front court and got the ball to Smart, who was fouled and made two free throws to make it 84-80 with 22 seconds to play.

After a Mizzou timeout, a three-point attempt was missed and Thomas got the rebound and was fouled, making two more free throws to complete the scoring.