Tigers Knocked Out of SEC Tournament By No. 2 Texas A&M 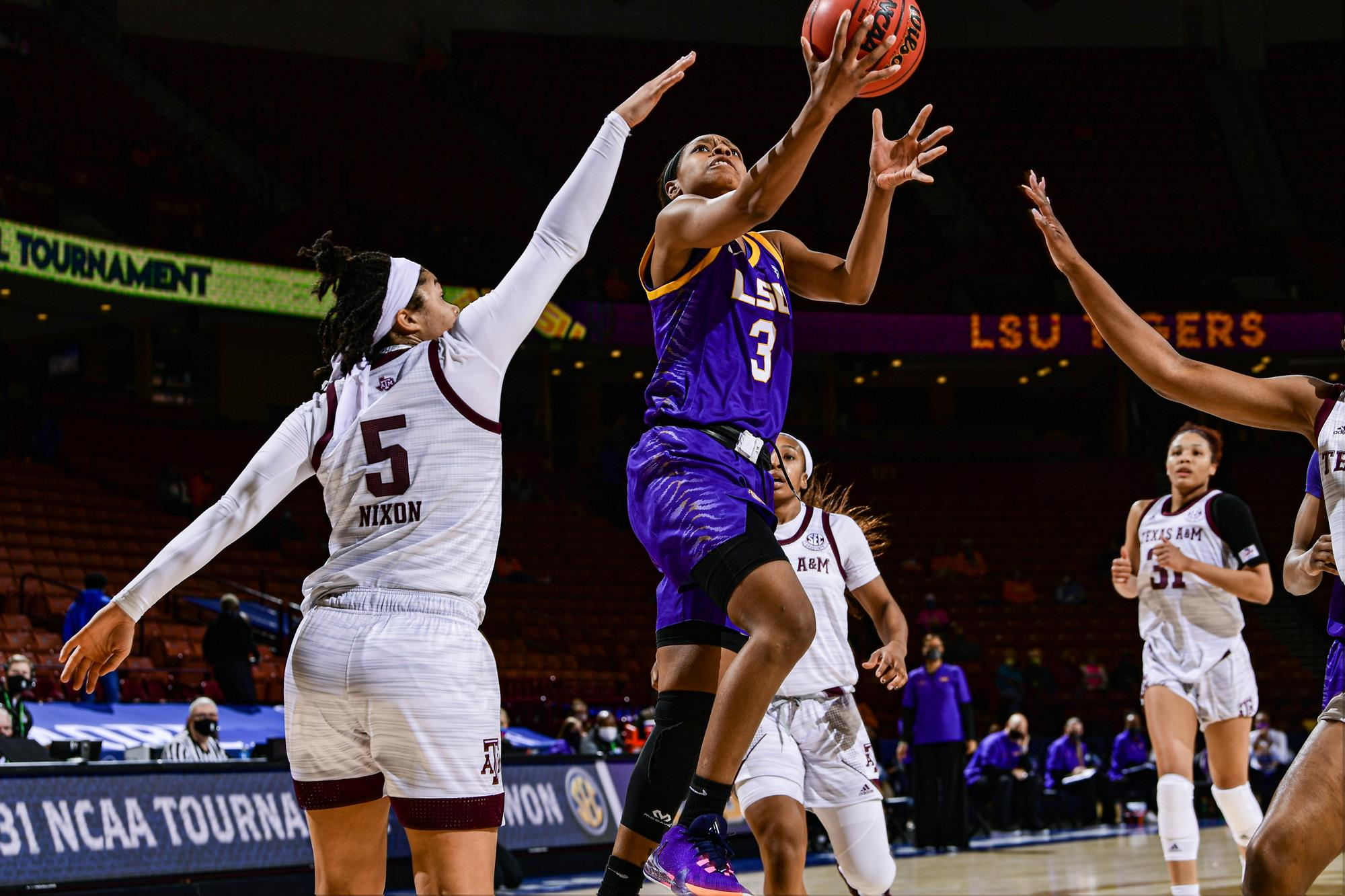 GREENVILLE S.C. – Despite a hard-fought battle, the LSU women’s basketball team lost to No. 1-seeded Texas A&M in the quarterfinals of the SEC Tournament on Friday by a final score of 77-58.

The Tigers are now 9-13 overall and will play the waiting game to find out their NCAA postseason fate on Monday, March 15 when the Selection Show is broadcast on ESPN at 6 p.m. CT. Texas A&M improves to 23-1 overall.

Senior Khayla Pointer led LSU with 26 points and four assists, while also grabbing six rebounds. Once again, Pointer moved up another spot on LSU’s all-time career scoring list. Her performance against the Aggies moved her to No. 21 on the list, passing Theresa Plaisance (1,293; 2010-14). She now has 1,306 career points.

Seniors Faustine Aifuwa and Rakell Spencer both scored 10 points to finish in double figures for the Tigers. Aifuwa also led the team in rebounds, finishing the day with eight.

Sophomore Tiara Young played well for the Tigers, finishing the game with five points and five rebounds to go along with two assists.

“It’s a two-possession game in the third quarter and we can’t generate enough offense. Field goal wise, you have looks. You have layups, wide open jumpers and we weren’t able to connect on them. In the third quarter, we went 2-12 and I really thought that hurt our offensive production. This game is about the responsibility that touches the floor, so if you are a starter, we need to outplay their starters. If you’re a bench player, we need to outplay their bench. What allowed us to win a lot of our games was because we did those things. Today, against a very talented Texas A&M team, who is No.1 overall in our league and probably a No.1 seed in the NCAA Tournament, and they showcased why. We have to examine how we fill our stat lines when the ball isn’t bouncing our way, and that’s where we have been struggling. In the past. We usually play Texas A&M in the fifties. To give up this many points, I thought our defense really failed us today, even though our offensive execution in the third quarter really hurt us.”

On being outscored in the paint…

“Texas A&M has N’dea Jones and Ciera Johnson, two very veteran post players that bring a lot of size. When Awa Trasi and Faustine Aifuwa got in foul trouble in the first half, we had to sit them. It’s hard to muster up enough height and size when our two primary post players are sitting on the bench. With that being said, we had a second half where we could’ve showcased what we were capable of doing. I really felt like (Khayla) Pointer needed some more help. I felt like Rakell Spencer did everything that she could, this was her best shooting night. We just couldn’t get anyone else going and I really thought that hurt us because we needed other guards to step up. Their post play was better than ours, but you can’t have them outplaying both. I thought that’s where our ability to knock down some shots that we knocked down yesterday would’ve helped, but we didn’t knock them down today.”