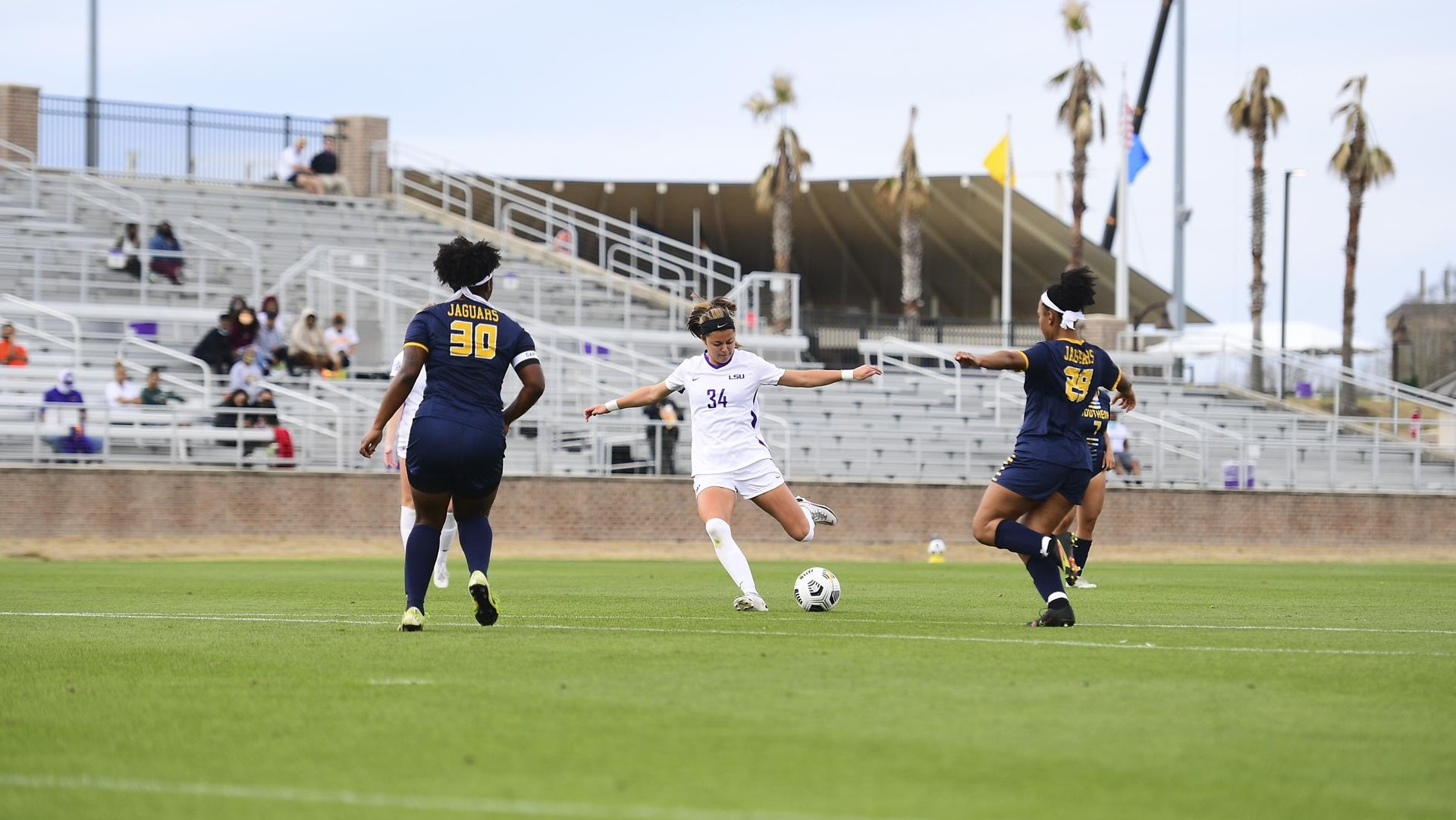 Baton Rouge, La. – The LSU soccer team picked up their fifth win of the season after defeating the Southern Jaguars by a score of 3-0 on Friday afternoon at the LSU Soccer Stadium. Redshirt junior Tinaya Alexander opened the scoring in the seventh minute with a tidy finish from eight yards out before junior Molly Thompson scored a brace in the 48th and 60th minute to conclude the goals for the afternoon.

“Our movement and possession play was really good today,” head coach Sian Hudson said. “It was great to be able to see the full squad rotate in at points and to have a great performance with all of our players involved, including seeing Tiana Caffey get her first minutes of the season after recovering from her injury. Overall, lots of positives that came from today’s stellar team performance.”

LSU’s first goal came in the seventh minute. Thompson dispossessed a Jaguar midfielder and found junior Wasila Diwura-Soale, who sent a through ball between the lines, that Alexander picked up with her right foot and opened up to hit a ground shot with her left that slotted past Southern goalkeeper Chioma Eriken.

“Great vision from Wasila on the assist,” Hudson said. “Tinaya’s confidence is flying high us for at the moment, and you could see that with her touch and then finish.”

The second goal came three minutes in to the second half. Alexander sent in a ground cross from the left flank into the box that perfectly found Thompson, who took one touch before shooting with her right foot and finding the back of the net.

Thompson bagged her brace and the final goal of the day in the 60th minute. Sophomore Maddie Moreau picked up the ball on the touchline on the left flank and skipped by her defender to send in a cross into the box that found an unmarked Thompson, who tapped it in inside the six yard box. The brace is Thompson’s second of her career, with her first coming in a 3-2 win versus Kentucky in 2019.

.@molly_thompsonn registered the second brace of her collegiate career with goals in the 48th and 60th minutes today!#GeauxTigers pic.twitter.com/XsUEN8S24w

LSU dominated the match from the first whistle to the end of the 90th minute. The Tigers played 21 players in game minutes, a new season high. Freshman Bella Zanotelli picked up her first full clean sheet in Purple & Gold, while junior Grace Haggerty marked her first start for LSU with a 56 minute outing and a clean sheet to boot.

LSU returns to the LSU Soccer Stadium for a game versus Dallas Baptist at 1 p.m. CT on Friday, March 12.