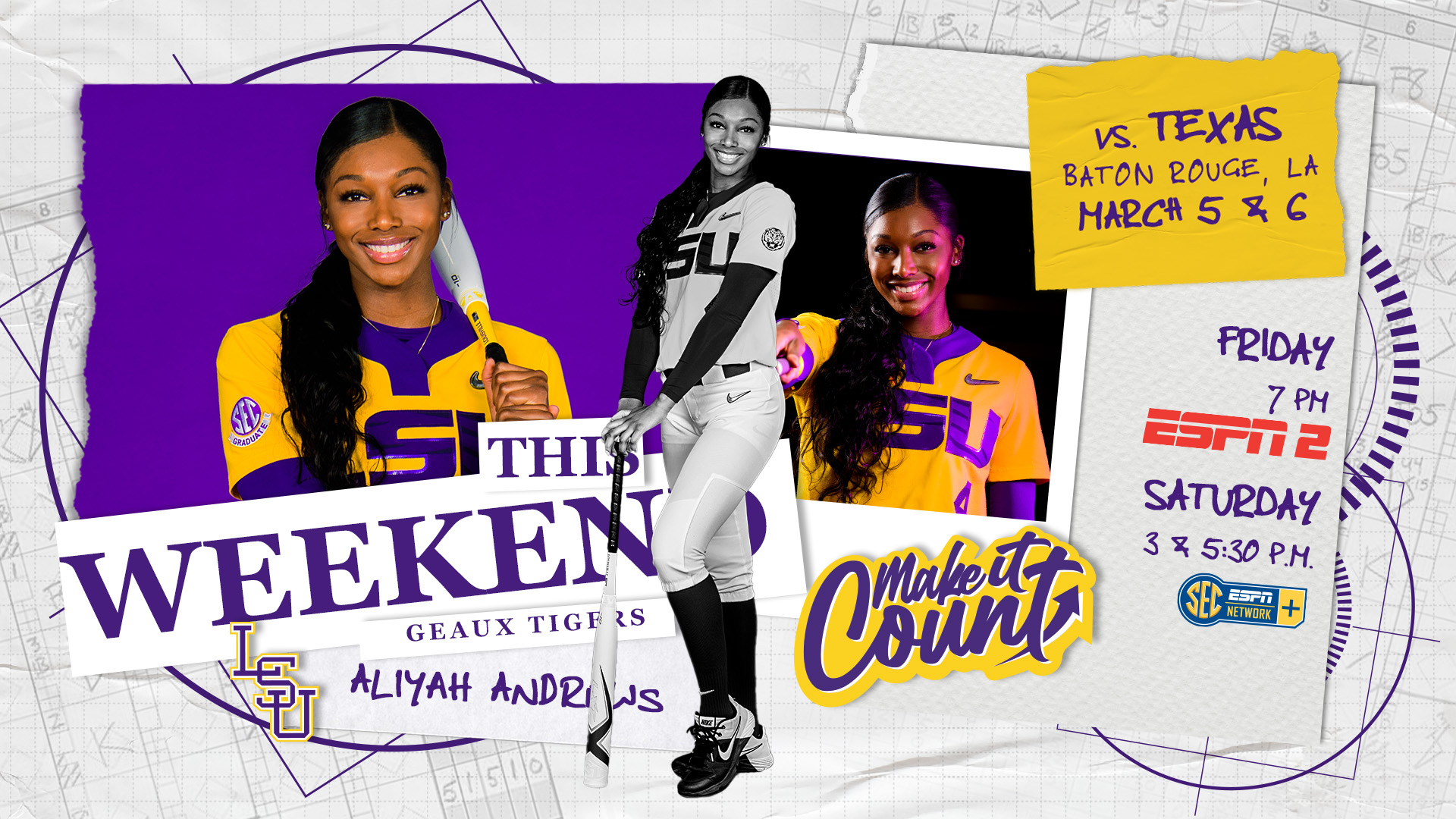 Friday’s single game is at 6 p.m. (moved up from 7 p.m.) and will be live on ESPN2. Mark Neely and Michele Smith will be on the call. Saturday’s doubleheader will begin at 3 p.m. and both games will stream live on SECN+ and the WatchESPN app with Hall of Famers Lyn Rollins and Yvette Girouard on the call. Live stats will also be available for all three games at LSUStats.com.

About the Tigers
The Tigers go into the weekend with an overall record of 11-5 after taking down Southern Miss in run-rule fashion Tuesday, 11-3.

The Tigers are hitting .284 on the year and averaging 5.38 runs per game. Aliyah Andrews and Ciara Briggs lead the team with a .400 batting average each. Andrews is currently on a three-game hitting streak, while Ciara Briggs has reached base in all 16 games this season. Andrews earned SEC Player of the Week on Monday after hitting .591 last week and recording spectacular catches in centerfield.

In the circle, Shelbi Sunseri leads the team in ERA with a 1.01 mark. She is 3-2 with 21 strikeouts in 27.2 innings. Shelby Wickersham earned the victory in the circle on Tuesday, improving her record to 3-1. She has 23 strikeouts in 25 innings of work. Maribeth Gorsuch earned her first two victories last week, claiming both against in-state rival ULL. Ali Kilponen leads the staff in strikeouts with 25 in 19 innings of work. She also holds her opponents to a staff-leading .197 batting average. The staff has an ERA of 2.21 for the year with four shutouts.

About Texas
The Longhorns come into the matchup undefeated at 9-0 after a midweek win over Houston on Wednesday. They hit five home runs to take down Houston, 9-0 in five innings. Texas has only played one ranked opponent thus far into the season as they faced No. 25 Mississippi State last weekend and came out on top 8-7.

At the plate, the Longhorns are hitting .384 with Jordyn Whitaker leading the team at .474 Janae Jefferson is right behind with a .464 average, and Shannon Rhodes is hitting .455 with two doubles, a triple and five home runs. Mary Iakopo leads the team in home runs with six.

What’s On Deck
The Tigers will open SEC action on the road next weekend, traveling to Knoxville, Tennessee for a three-game series with Tennessee. Friday’s game will air on SECN+ at 5 p.m. CT. Saturday the Tigers will be live on SEC Network at noon CT with Sunday’s game at noon on SECN+.