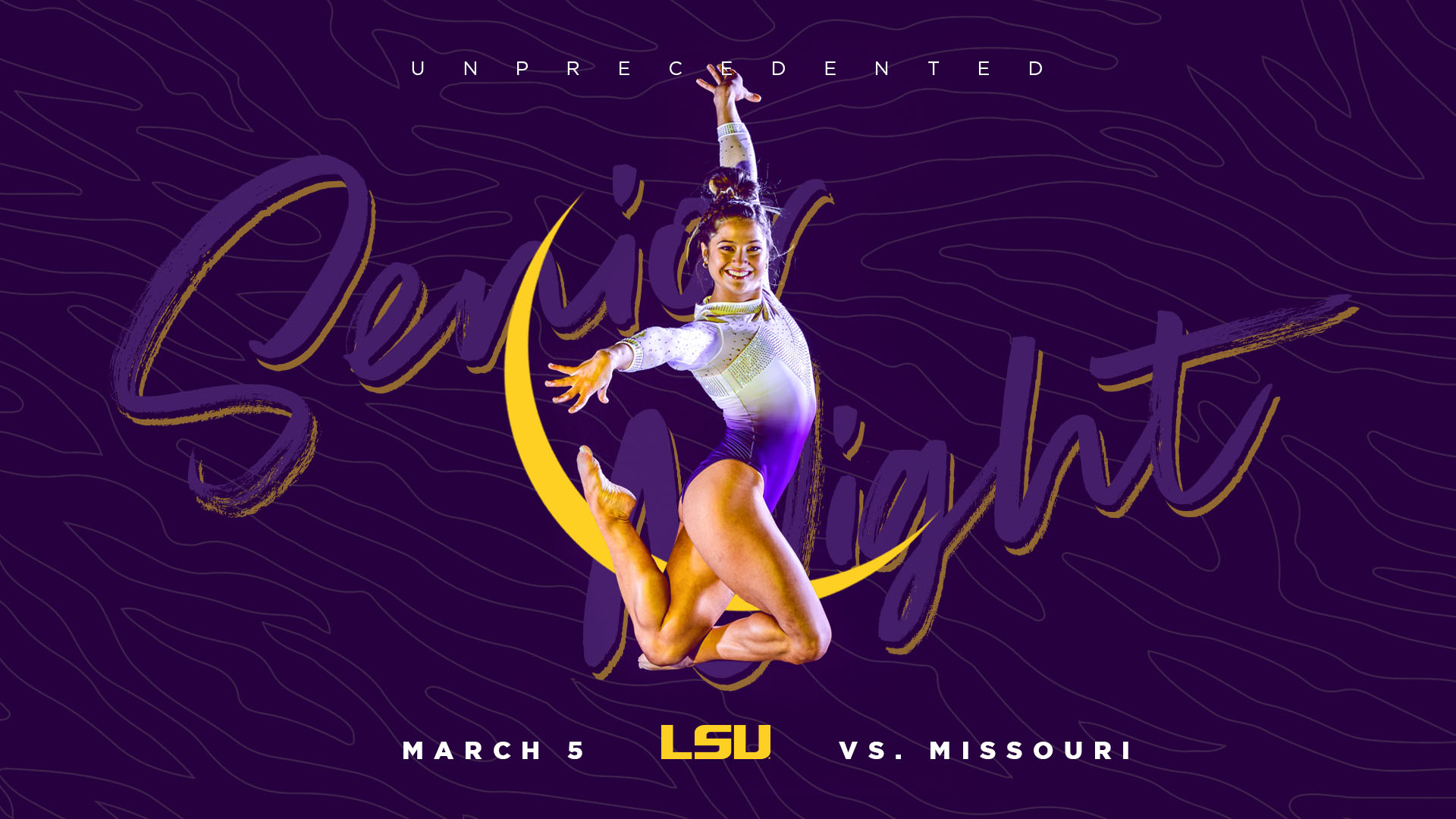 The meet will be streamed live through SECNetwork+ at WatchESPN.com and the app. Lyn Rollins and former LSU gymnast Kaleigh Dickson Abboud will call the action. It also marks the final meet together for LSU’s seniors in the PMAC. LSU will also recognize the 2020 class – Ashlyn Kirby, Kennedi Edney and Ruby Harrold. The trio was not properly recognized last year due to their final meet being canceled because of COVID-19.

The meet is officially sold out with a limited number of student tickets available at the PMAC ticket office prior to doors opening at 6:15 p.m. Fans are encouraged to visit stubhub.com, the official ticket marketplace of LSU Athletics.

The same PMAC guidelines from the two previous home meets are still in place. Fans will be required to wear face masks and there will be up to 25 percent capacity in the arena with fans physically distanced. A comprehensive and updated list of COVID-19 related changes can be found here.

Last Time Out
LSU scored a disappointing 196.800 in the loss to Kentucky in Lexington. The Tigers showed promise on vault but were unable to put up consistent performances across the board. LSU scored a 49.600 on vault for the second highest score in the nation and fourth highest in school history. Individually, LSU gymnasts put up some of their top performances this season. Sophomores Alyona Shchennikova and Kiya Johnson took the vault title. Shchennikova captured added beam and freshman Haleigh Bryant earned the win on floor.

Final Meet for LSU’s Seniors
Although most have not made a decision either way, this is expected to be the final meet together in the PMAC for LSU’s six seniors – Reagan Campbell, Christina Desiderio, Sarah Edwards, Sami Durante, Bridget Dean and Olivia Gunter. The group has an extra year of eligibility if they wish to take it due to the COVID-19 pandemic.

In four years, the group has won two SEC Championships and been to two NCAA Championships, finishing fourth in 2018 and second in 2019. The group has helped lead LSU to 79 wins and numerous memorable moments.

As a team, LSU ranks second in the nation on bars, third on vault, fourth on beam and sixth on floor. LSU is one of just two teams in the country to score a 49.600 or higher on vault. The Tigers did it against Kentucky, which marked the fourth-highest vault score in school history.

Individually, freshman Haleigh Bryant ranks second on floor, eighth on vault and sixth in the all-around. Sophomores Kiya Johnson and Alyona Shchennikova rank in the top-20 on both vault and bars. Freshman Olivia Dunne is 21st on bars. Seniors Sami Durante and Sarah Edwards rank seventh on bars and 17th on vault respectively.