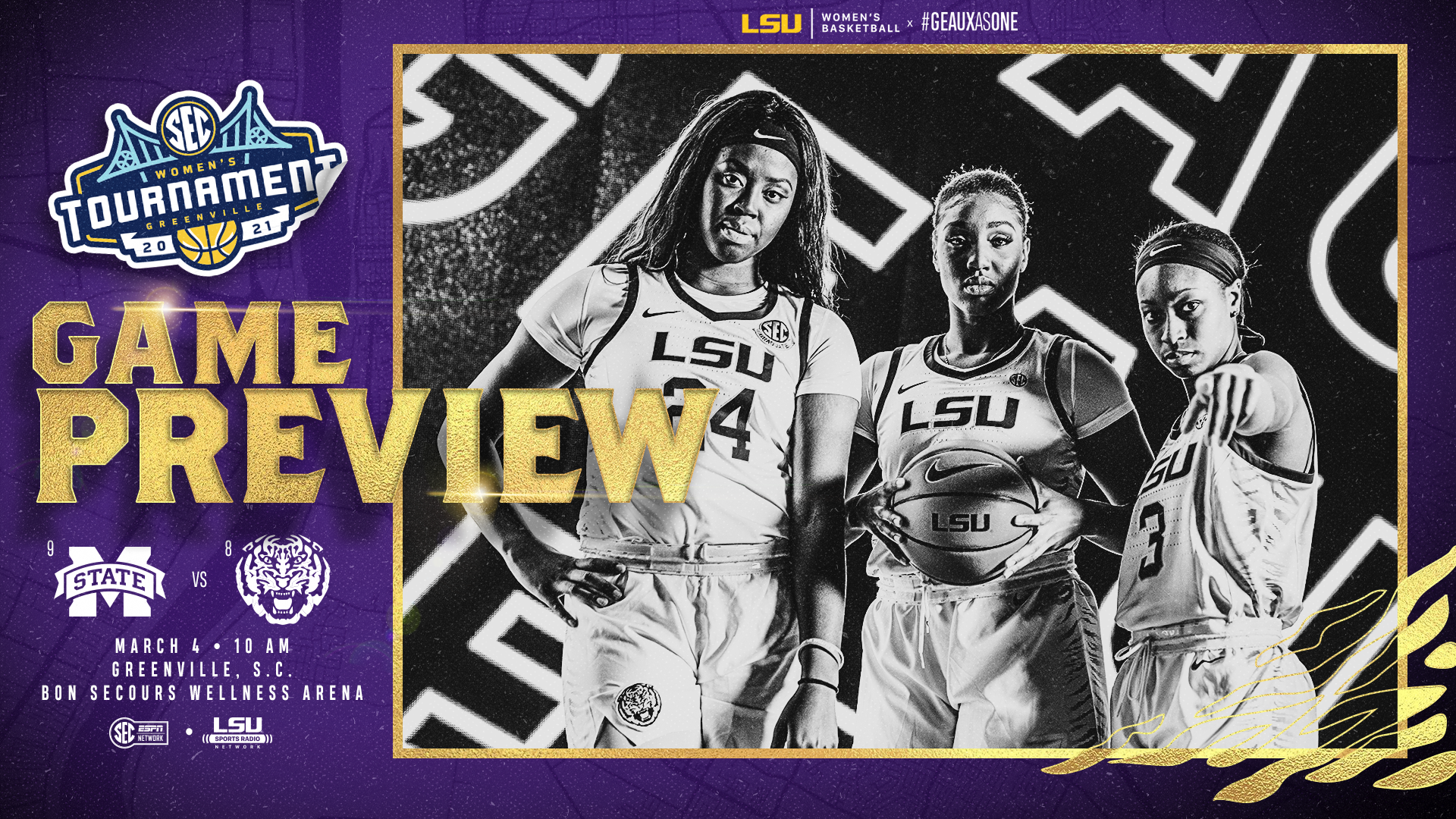 GREENVILLE, S.C. – The LSU women’s basketball team will face Mississippi State on Thursday, March 4 at 10 a.m. CT at the Bon Secours Wellness Arena in Greenville, South Carolina, in Game 2 of the 2021 SEC Women’s Basketball Tournament. The Tigers are the No. 8 seed in the tournament and will be the home team, while the Bulldogs are the No. 9 seed.

The matchup is a repeat of the Tigers’ regular season finale last Thursday in Baton Rouge. MSU won the first meeting 68-59. Both teams are battling for a spot in the 2021 NCAA Tournament coming up in two weeks. 2021 also marks the 30th anniversary of LSU’s first SEC Tournament title back in 1991.

The winner of Thursday’s game will face No. 1 seed Texas A&M in the quarterfinals on Friday, March 5 at 10 a.m. CT. That game will be carried on the SEC Network and the LSU Sports Radio Network.

The NCAA is utilizing the NET system for the first time in women’s basketball this season. LSU currently has the second-best average opponent NET rank in the nation at 54. The Tigers’ opponent success ranks No. 3 and non-conference strength of schedule ranks 92. Against NET Top 25 teams LSU is 2-6 and 5-9 against the Top 50.

Thursday’s game will be broadcast on the SEC Network with Eric Frede and Tamika Catchings calling the game with Steffi Sorensen adding commentary from the socially-distanced sideline. Fans can watch SEC Network through their local cable or satellite provider, over the internet at ESPN.com/watch or on the ESPN app. A link to the game is available on LSUsports.net.

LSU is 8-12 on the season and finished in eighth place at 6-8 in the SEC following last week’s loss against MSU.

Senior Khayla Pointer was named to the 2021 All-SEC First Team and All-Defensive Team on Tuesday. The guard from Marietta, Georgia, leads the team with 16.6 points and 4.2 assists per game and 47 steals. She ranks among the Top 120 players in the NCAA and Top 20 in the SEC in 11 statistical categories. This season Pointer became the program’s 34th 1,000 career points scorer and eighth player to record over 400 career assists. She currently ranks No. 23 on the all-time scoring list with 1,266 points and seventh on the assists list with 424.

Redshirt senior Faustine Aifuwa became the second Tiger to record over 180 career blocked shots on Feb. 21 against South Carolina, joining LSU legend Sylvia Fowles, and currently has 187. Aifuwa is currently in 14th place on the career rebounds list with 737, the 16th LSU player to record over 700 career rebounds. To become LSU’s 35th 1,000-career points scorer, Aifuwa needs 26 points. Aifuwa continues to lead LSU with 8.8 rebounds per game and 36 blocked shots this season, and is the second-leading scorer on the team with 11.2 points per game.

Senior Jailin Cherry will become the third Tiger this season to play in their 100th career game when she takes the court on Thursday. Pointer reached the mark on January 18 at Missouri, while Aifuwa hit the milestone in Purple & Gold on January 24 against South Carolina.

Mississippi State is 10-8 overall and 4-7 in SEC play this season, right behind LSU in ninth place. The Bulldogs are led in scoring by Rickea Jackson at 14.9 points per game. Jessika Carter is second in scoring with 14.3 points per game and leads the team in rebounds with 8.8 per game and 27 blocked shots. Aliyah Matharu also averages double-figures in scoring at 10.7, coming primarily off the bench. Myah Taylor runs the point and leads the team with 75 assists and 31 steals.

This will be the 63rd meeting between LSU and Mississippi State. The Tigers lead the series, 47-15 and are 5-2 against the Bulldogs in neutral site games.

Fans attending the 2021 SEC Women’s Basketball Tournament in Greenville are encouraged to become familiar with policies related to fan entry and security for the event, including a no-bag policy for Bon Secours Wellness Arena for the duration of the event.

The tournament will have a limited seating capacity of 3,000 fans due to COVID-19 restrictions. It is a mobile tickets only event. Face coverings are required and hand sanitizer will be readily available throughout the arena.

Tickets may be purchased thru www.ticketmaster.com or the Ticketmaster app.