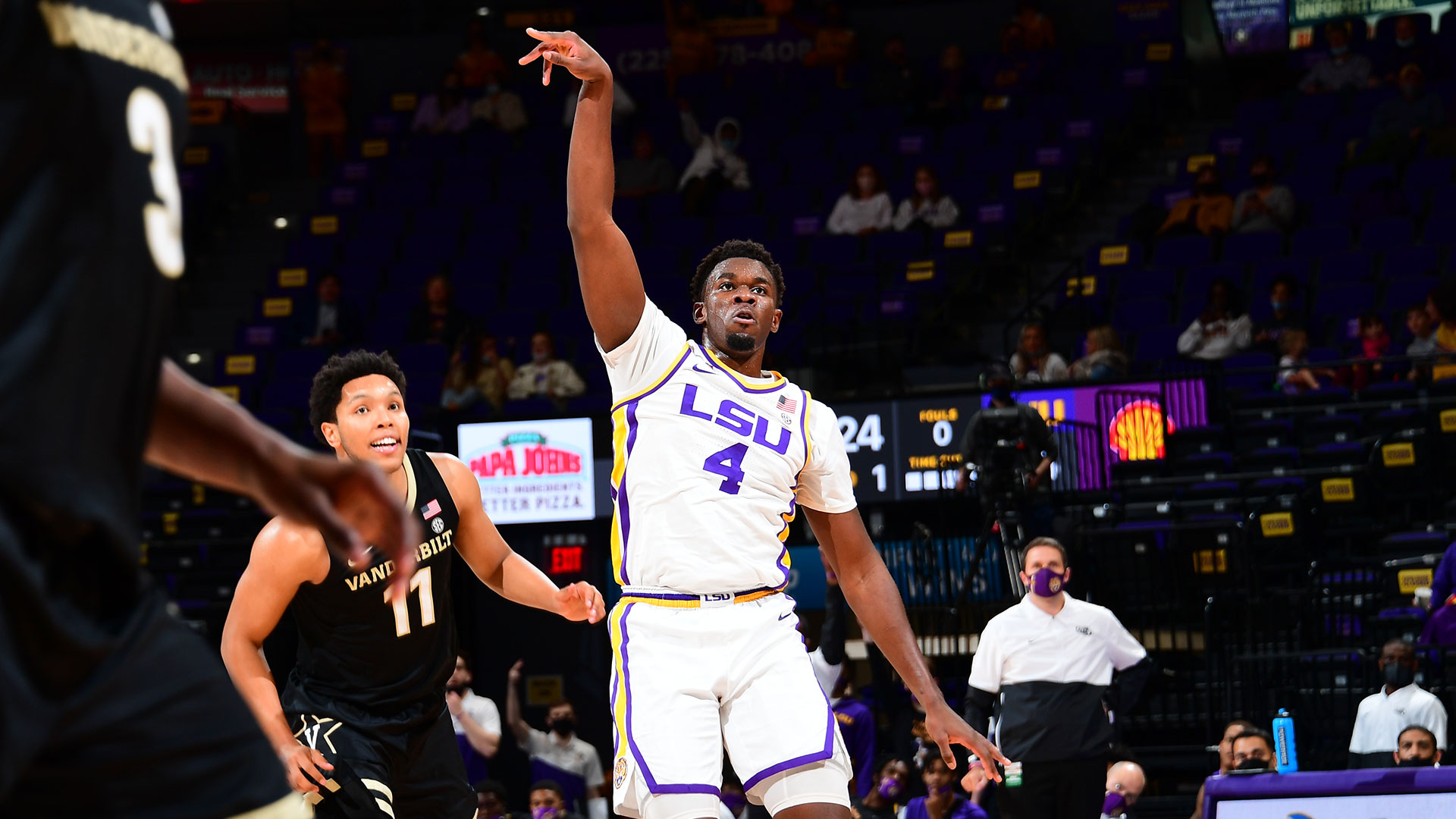 BATON ROUGE – The LSU men’s basketball earned its 10th Southeastern Conference win for the third straight season and clinched a double bye in the SEC Tournament with a good 83-68 win over Vanderbilt Tuesday night at the Pete Maravich Assembly Center.

The Tigers will conclude the 2020-21 regular season on Saturday afternoon at 2 p.m. against the University of Missouri.

LSU is now 15-8 overall and 10-6 overall. It is the first time the Tigers have won double figure SEC games for three consecutive seasons since LSU won 10 or more for five seasons from 1988 through 1992. LSU has won a combined 38 SEC games over the last three seasons.

Three players for LSU had double doubles in the LSU victory. Cameron Thomas had his first college double double with 23 points and 10 rebounds. Thomas, who made it nine straight games with 20 points or more, hit three treys and 8-of-9 at the free throw line.

Trendon Watford had 14 points and 13 rebounds with four assists, while Darius Days had another good night shooting, getting 13 points with three treys, 10 rebounds and four assists. Javonte Smart hit for 12 points and three assists.

The Tigers had 17 assists on 30 made buckets and hit 10 treys for the seventh time this season.

LSU shot 59.4 percent in the opening 20 minutes (19-of-32) when the Tigers dominated much of the play in getting a 46-24 halftime advantage. LSU scored the first nine points as Thomas twice and Aundre Hyatt hit jumpers and Days hit his first trey to make it 9-0, 3:31 into the contest. Days’ second trey gave LSU its first double digit lead at 14-3 with 14:11 to go in the opening half and LSU was rolling forward.

Vanderbilt made just eight field goals in the first 20 minutes of play.

The Commodores (7-14, 3-12) outscored LSU in the second half, 44-37, as LSU made some unforced errors, committing 10 second half turnovers over the last 20 minutes. But they could not cut the LSU lead inside single digits as the Tigers led for 39:33 of the contest.

While LSU has locked up the fourth seed at worst for the SEC Tournament and a double bye, the Tigers are still alive for a possible third seed. Florida would need to lose one of its games either Wednesday or Sunday and LSU win Saturday at Missouri.
—
LSU Coach Will Wade and the Voice of the Tigers Chris Blair will be at TJ Ribs on Acadian Thruway Wednesday night at 7 p.m. for the Will Wade Show on the affiliates of the LSU Sports Radio Network.