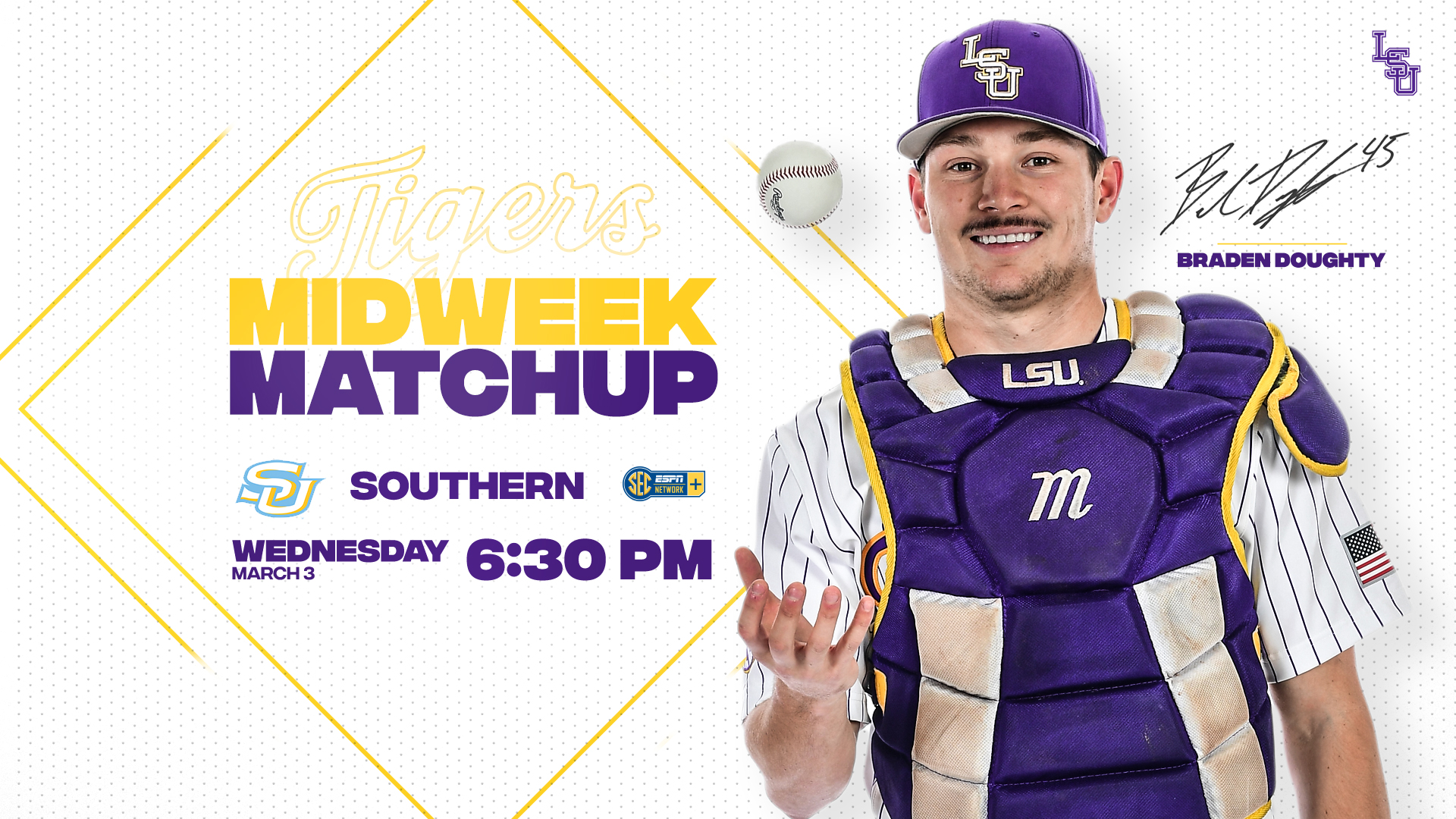 RANKINGS
• LSU – No. 8 Collegiate Baseball; No. 8 USA Today; No. 11 D1 Baseball; No. 12 Baseball America
• Nicholls and Southern are unranked

SERIES RECORD VS. NICHOLLS
LSU leads the all-time series with Nicholls, 56-24, including a 14-0 win over the Colonels on Sunday in Alex Box Stadium, Skip Bertman Field. The Tigers have won 29 of the past 32 meetings with the Colonels. Nicholls’ only wins in its last 32 games versus LSU were a 4-2 victory last season in Thibodaux; a 6-3 triumph in 2015 in Baton Rouge; and a 3-1 win in 2009, also in Baton Rouge.

QUOTING PAUL MAINIERI
“The pitching our hitters have faced so far this season has been pretty good. Certainly, the SEC will be a notch up, but we have faced some quality pitching, and all of our guys have risen to the occasion. We have some special freshmen hitters this year that have come in and made a big difference. Not only do they have talent, they are also very coachable and they’re very poised for freshmen.

“Our intention has always been to utilize Javen Coleman as a midweek starter, and I see a great future for this kid. I think he’s capable of one day being a weekend starter at LSU. This will be a big start for him; I’m sure he’s going to be pumped up, so have to make sure we manage his emotions and he stays in the strike zone.”

ABOUT THE TIGERS
• LSU won all five of its games last week, defeating Louisiana Tech, UL-Lafayette, Youngstown State (twice) and Nicholls … LSU hit .332 in its five games last week with 52 runs, 62 hits, 10 doubles, one triple and 13 homers … LSU is No. 2 in the SEC with 15 homers on the year, its highest seven-game homer total since the 2009 season.
• Freshman left-hander Javen Coleman will make his first career collegiate start in Tuesday’s game versus Nicholls … Coleman pitched brilliantly in relief last Monday (Feb. 22) to defeat Louisiana Tech, working 3.2 innings and allowing just one run on one hit with one walk and seven strikeouts …  he fired 51 pitches in the outing after entering the game in the top of the fourth inning with LSU trailing 5-1 … the Tigers went on to post a 16-7 victory.
• The Tigers’ 14-0 blanking of Nicholls on Saturday was LSU’s first shutout since April 3, 2019, when the Tigers posted a 2-0 win over South Alabama … junior right-hander Landon Marceaux fired a career-high 10 strikeouts in six shutout innings to defeat Nicholls on Saturday … Marceaux allowed two hits with no walks while throwing 71 pitches, 50 for strikes … only one Nicholls hitter advanced beyond second base against Marceaux, who retired 11 batters in a row from the third until the sixth inning … Marceaux has not allowed a run this season in 11 innings with no walks, 14 strikeouts and a .108 opponent batting average.
• Sophomore second baseman Cade Doughty batted .429 (9-for-21) in the Tigers’ five wins with two doubles, one triple, two homers, nine RBI and three runs scored … Doughty launched a two-run, two-out, walk-off home run in the bottom of the ninth inning against Youngstown State on Saturday to lift LSU to a 5-3 victory … the walk-off homer was LSU’s first since February 16, 2019, when Cade Beloso blasted a walk-off dinger to defeat Army … Doughty was 3-for-5 at the plate in Saturday’s win with one double, one homer and three RBI … Doughty also had three hits in Wednesday’s win at UL-Lafayette, including a double and two RBI.
• Freshman outfielder Brody Drost hit .500 (6-for-12) last week with one doubles, one homer, three RBI, four runs scored and one stolen base … Drost launched his first career collegiate homer on Wednesday night, a two-run blast in the Tigers’ win at UL-Lafayette … in LSU’s win over Nicholls on Saturday, Drost collected a career-best three hits in five at-bats with a double, a stolen base and two runs scored.
• Junior right-hander Jaden Hill recorded a dominant effort in Friday’s win over Youngstown State, limiting the Penguins to one hit in six shutout innings … Hill allowed just one single while registering no walks and four strikeouts.
• Freshman rightfielder Dylan Crews hit .400 (8-for-20) last week with two doubles, two homers, three RBI and seven runs … Crews, LSU’s leadoff hitter, is batting a team-high .429 on the year with a .543 on-base percentage.