Soccer Comes From Behind in 2-1 Win Over South Alabama 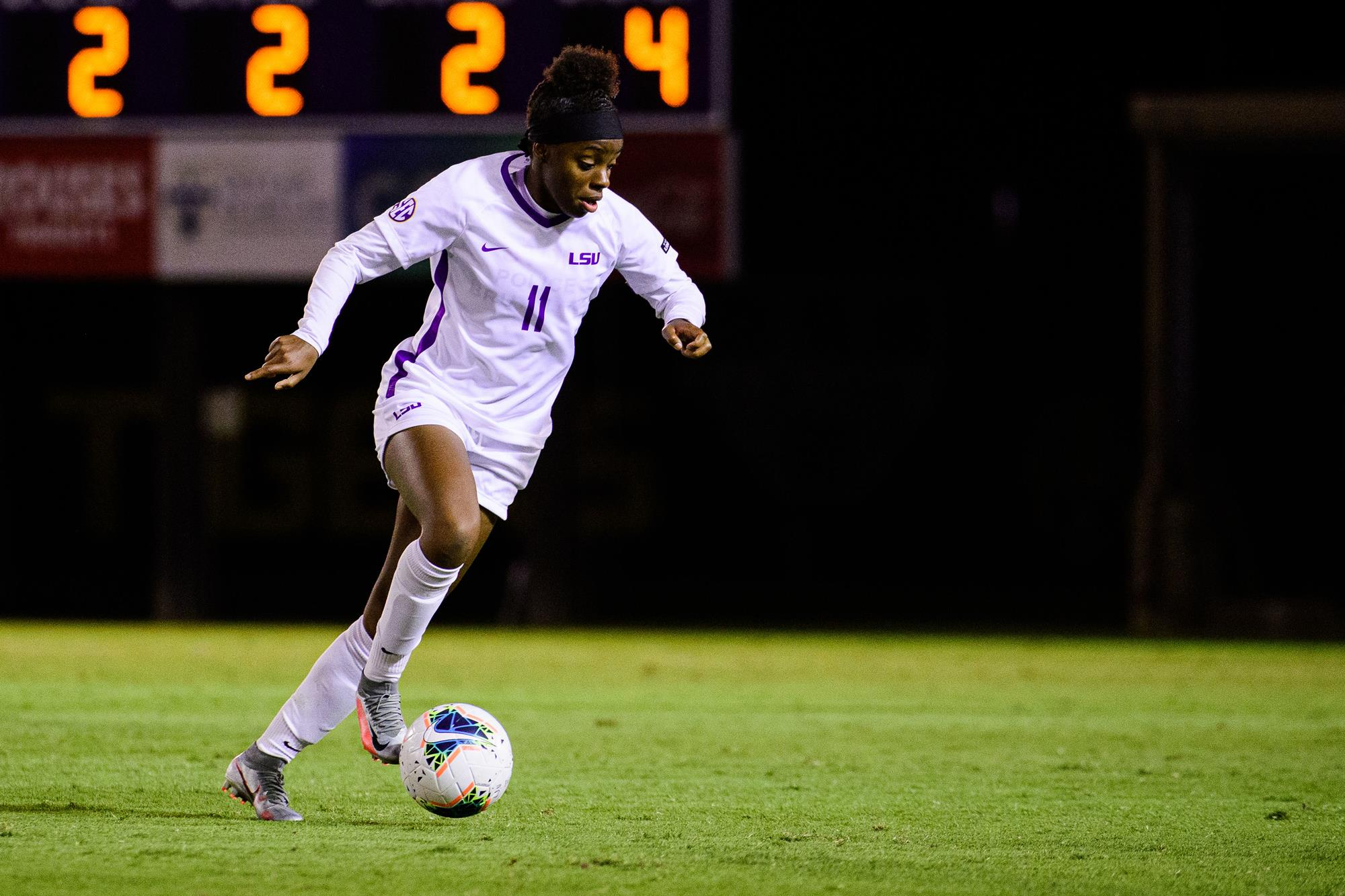 Mobile, Ala. – The LSU soccer team fought back from a one goal deficit to defeat the South Alabama Jaguars by a score of 2-1 on Sunday night at The Pit. South Alabama’s goal came in the 33rd minute, a tidy finish from eight yards out by Laurence Saviana. Redshirt junior Tinaya Alexander brought it back to 1-1 in the 53rd minute with a precise header from a cross by junior Savannah Mills before giving the Tigers the lead in the 69th minute with a penalty she rolled into the bottom left corner.

“Many positives from tonight,” head coach Sian Hudson said. “I think we kept possession very well and had many great combinations, particularly in the central channel. We had come off a 110 minute performance on Friday night, so we knew there was potential for heavy legs to play a factor, but the team persevered. To go a goal behind against the run of play meant half time would be a big moment for us, and we came back out in the second half with a great response and were able to pull it back and then go ahead. “

LSU applied pressure from the first minute, limiting South Alabama’s chances in numbers and in quality. Sophomore Mollee Swift registered the first save of the evening in the 2nd minute, parrying a shot from the top of the box to her left.

Jaguar goalkeeper Allison Luckhardt was tested multiple times in the first half by LSU. She got her first save of the night in the 8th minute as she collected a volley from 16 yards out by freshman Taylor Dobles. Luckhardt was called into action again two minutes later, collecting a shot on goal from Mills.

Junior Shannon Cooke made her presence known on set pieces, getting good looks at goal from multiple LSU corners through the night. Junior Reese Moffatt sent a cross in on a corner in the 24th minute that found Cooke back post, whose header across goal was cleared away by a Jaguar defender. Seconds later, Cooke once again found herself on the end of a Moffatt corner at the far post, with her shot on goal once again blocked by a defender.

Against the balance of the match, South Alabama took the lead in the 33rd minute. Brenna McPartlan and Kailey Littleford connected in the midfield before they found Saiana with a final ball that Saviana was able to poke past Swift from eight yards out.

The Tigers pushed for an equalizer before halftime. In the 44th minute, Cooke once again showed her aerial ability by connecting on a header from an LSU corner that required a save from Luckhardt. Only seconds later, junior Wasila Diwura-Soale sent an effort on goal that forced a Luckhardt save and she had one more chance after following a bad clearance that Luckhardt caught in her gloves.

The quality of play from LSU’s first half did not drop as the second half began and the Tigers found the equalizer in the 53rd minute. Diwura-Soale picked up the ball in the final third and beat the press from defenders to find Mills on the right flank. Mills sent a pinpoint cross far post that found an unmarked Alexander on the end who headed it home from six yards out.

.@savannahkenzi with the cross, @tinayaalexande3 with the finish. We are level with 30 minutes left to go in the second half! pic.twitter.com/kGWD50lEie

“It was a fantastic ball into the box from Savannah,” Hudson said. “It’s been fantastic to see her emergence in the team since the spring began and I’m happy she was rewarded for her efforts with a great assist.”

In the 69th minute, Leandra Flury committed a foul in the LSU box and the referee pointed to the penalty spot for it. Alexander stepped up to the spot and calmly slotted it in the bottom left corner to give LSU a 2-1 lead on the night. The goal was Alexander’s second of the night, bringing her season total up to six and her first brace since the 2-1 second round win over Ole Miss in the 2020 SEC Tournament.

The deciding goal – calm, cool, and collected penalty into the left corner from @tinayaalexande3.

“Tinaya showed her composure with her two goals today,” said Hudson. “The first header was a very composed finish into the net, and to step up and take the penalty and have the composure to put it away as confidently as she did is a testimony to the growth in her playing ability and her own self confidence.”

South Alabama chased an equalizer, but the Tigers remained firm in defense and kept control of the match’s tempo. Swift was challenged two more times by the Jaguar attack. In the 73rd minute, she denied a curling effort from outside the box with a diving save to her right hand side. The final chance of the match came from a corner in the 77th minute, with Kailey Littleford’s header comfortably caught by Swift. Swift finished the match with four saves, taking her season total up to 73.

73′ | @MolleeSwift denies the long range shot and keeps us outfront.

LSU outshot South Alabama 14-8, with eight of LSU’s shot being on target versus South Alabama’s five. The Jaguars narrowly won the possession battle, holding the ball for 51% of the match versus LSU’s 49%.

“It was great to end this road trip with a win,” Hudson said. “I think it says a lot about the trajectory of the team and the way we’re trending. In our last six matches, we’ve had four wins, a draw, and one defeat. The winning mentality and the belief is really coming along, and we’re just so pleased with that and the growth we’ve seen from the team so far this season.”

LSU returns to the LSU Soccer Stadium for a match at 1 p.m. CT on Friday, March 12 versus Dallas Baptist.