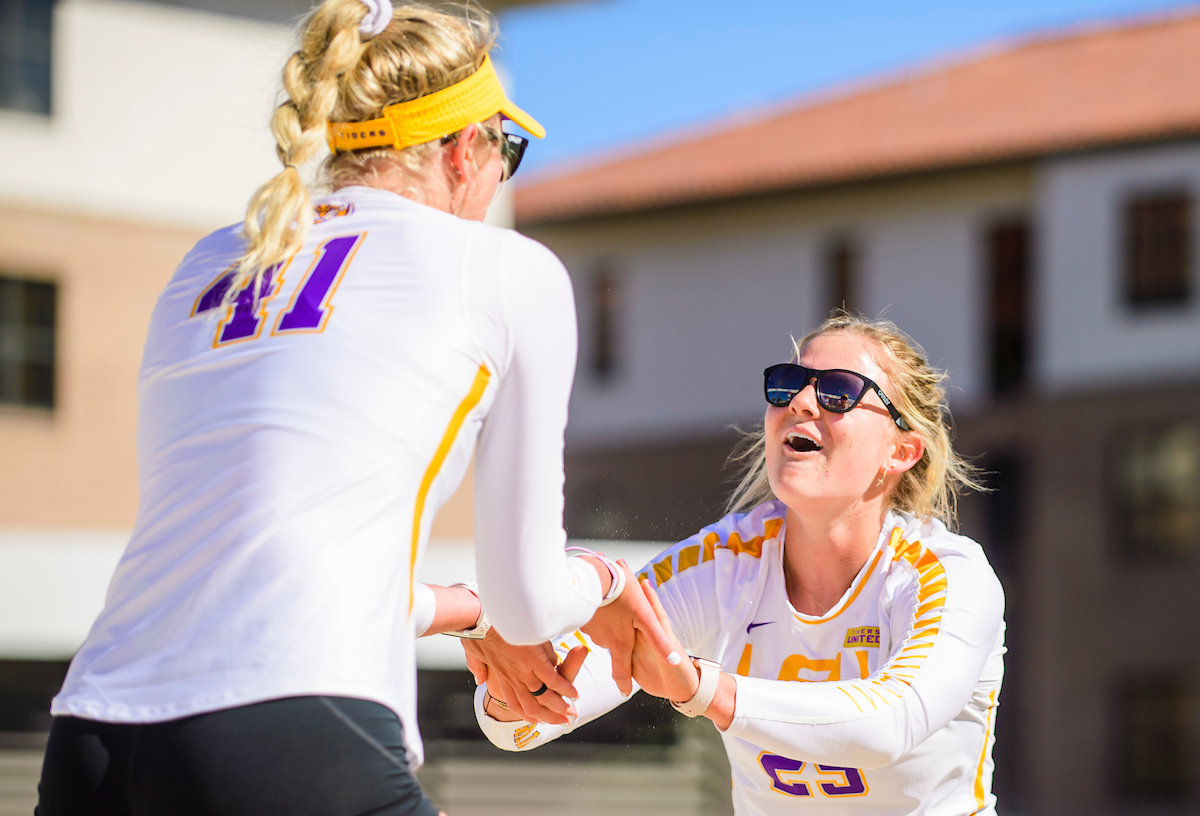 “Overall this weekend was a great success,” said Coach Russell Brock who secured his 100th career victory in the Tigers’ victory over ULM. “It was clear that we got better every time we were in the sand and that’s really all you can ask for. I’m proud of the way we played and how hard we worked”

Congratulations to Coach Russell Brock for picking up his 100th career victory this weekend!

He has a .759 winning percentage as the Tigers’ Head Coach ?? pic.twitter.com/QsBR5VVGQy

LSU’s pairs on the main five courts did not change from Friday to Saturday and every court aside from Court 2 won all four matches throughout the two day event.

“I thought our young players took advantage of their opportunity to get some early action,” said Brock. “I’m excited to see how they continue to grow. Our veterans were really good. Clearly there was some rust after a year away, but they played really well. I’m impressed with how fit we are and how we responded to two days of match play.”

The Tigers are back home at LSU Beach Volleyball Stadium next week where they have never lost a match. LSU will host the Tiger Beach Challenge and welcome Florida Atlantic, Florida State, Georgia State and Houston Baptist. The first three of those teams were all ranked in the preseason poll, including Florida State who was No. 3, meaning there could be a meeting of two top-three teams next weekend in Baton Rouge.

“I can’t wait to get back to work on Monday,” said Brock. “We have a big weekend at home coming up.”

LSU Beach Volleyball Stadium is closed to the general public this spring due to its limited capacity. Fans must be on a preapproved pass list in order to enter matches. Cox Sports Television will air all of LSU’s matches next weekend.

Taryn Kloth and Kristen Nuss made easy work on Court 1, 21-12 and 21-8, clinching the match for LSU. Both Courts 2 and 3 needed third sets to decide.

Closing out the weekend, the Tigers played maybe their cleanest match of the weekend in the rematch against HBU as LSU did not drop a set. Shank and Lansman got the Tigers rolling on Court 4, 21-14 and 21-10. York and Ordonez also kept rolling right along on Court 5, 21-15 and 21-14.