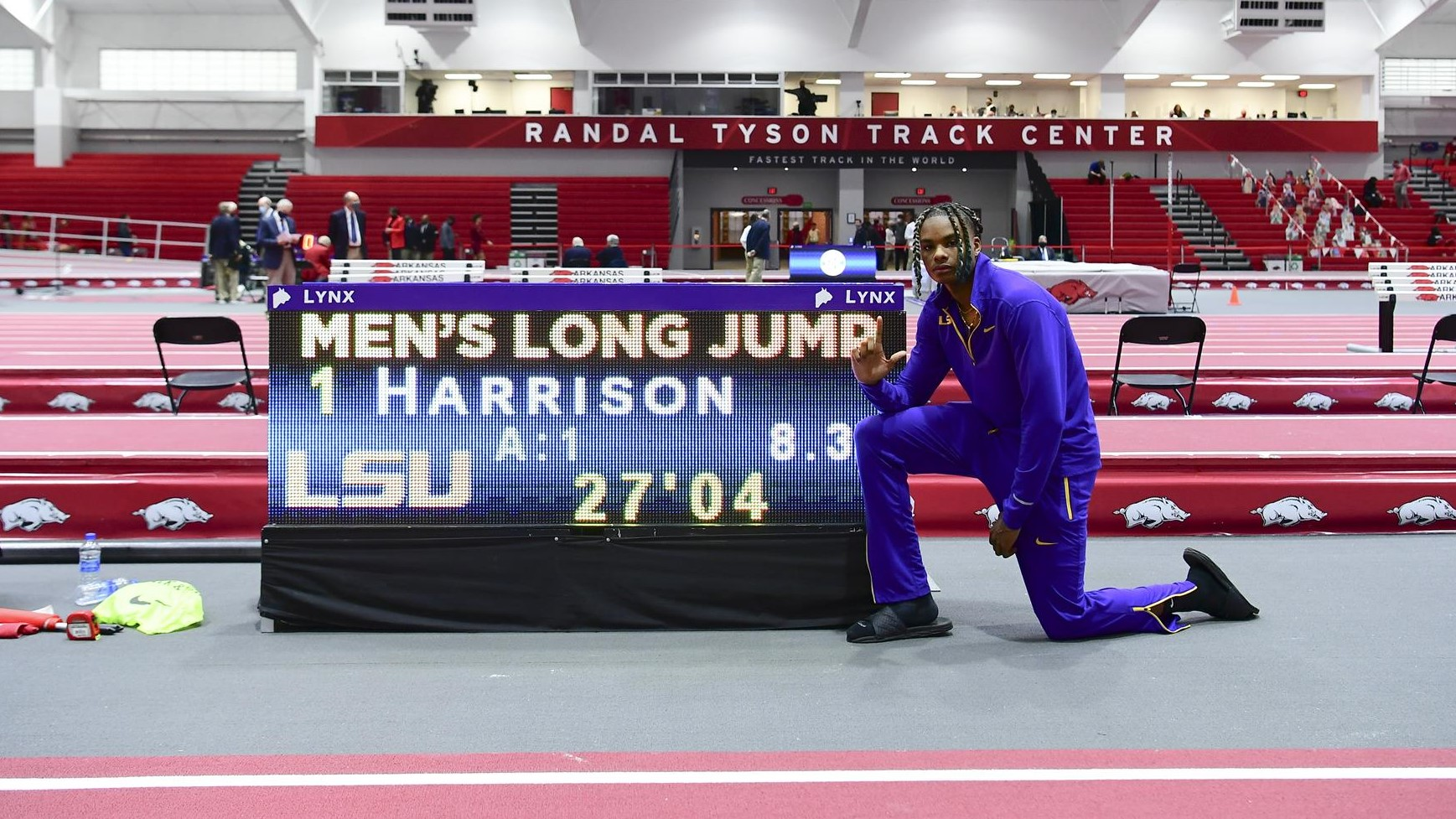 Fayetteville, Ark. –  JuVaughn Harrison led the charge for the LSU track and field program on day two of the 2021 SEC Indoor Championships at the Randal Tyson Center by winning the long jump and high jump SEC event titles. He won with marks of 27′ 4″ in the long jump and 7′ 2.50″ in the high jump.

Harrison had himself a wild two and a half hours on Friday afternoon. First it was the high jump at 12 p.m. CT; Harrison entered this event as the two-time defending indoor SEC champion. He only had to clear three bars in what was a workmanlike and efficient showing. He entered at a height of 6′ 11.75″ (2.13 meters) and cleared that easily. By the time he cleared his second bar of the event – a height of 7′ 1.50″ – there was only one competitor left with him. He went on to get up and over the bar of 7′ 2.50″ (2.20 meters) that wound up winning him the title after Auburn’s Dontavious Hill could not clear 7′ 3.75″ on his final try. Knowing he had the long jump coming up shortly, Harrison retired from the event.

The high jump was a good, smooth start for me today,” Harrison said. “Coming into the event, I knew I had two events on the schedule so I was trying to be as efficient as I could be. It meant a lot to me (to win third straight SEC title) and after I cleared that last bar my focus was on to the long jump.”

About an hour after the completion of the high jump it was on to the long jump for Harrison who entered that event as the favorite as well. Harrison had never won a long jump SEC title, but he changed that with his first leap of the event. The senior leaped out to a commanding lead of 27′ 4″ (8.33 meters) on his first jump of the event. That mark broke Marquis Dendy’s (Florida) SEC meet record of 27′ 0.75″ that was set in 2013; it also makes Harrison the fifth best performer in collegiate history, the LSU school record holder, and he is now tied for the world lead in the event in 2021.

“I was a little surprised by the mark,” Harrison said about his mammoth leap. “The run felt good, the takeoff felt good, but I didn’t think it was as far as that. I saw the 27′ 4″ mark on the board and that made me happy. I knew I had that in me and it felt awesome to get it out there in competition.”

It wasn’t just Harrison who provided points for LSU in the jumps, but five other jumpers placed in the top eight to score for the Tigers. On the women’s side, Aliyah Whisby captured silver in the women’s long jump with a personal best of 21′ 8.25″ (6.61 meters); the mark ranks fourth in the NCAA this year and No. 3 in the LSU record book.

The rest of the day featured qualifying on the track. The Tigers advanced six men to Saturday’s finals and the women moved three athletes to the finals. A full list of Saturday’s finalists can be viewed below. Milan Young (8.08/60 meter hurdles), Favour Ofili (23.15/200 meters), and Dorian Camel (21.03/200 meters) all registered PRs to get themselves a spot in the finals.

After two days of competition the LSU men are in second place with 34 points. Arkansas leads the men’s competition with 57 points. The LSU women have scored 36 points so far and are in fourth place; Georgia leads the women’s side with 49 points.