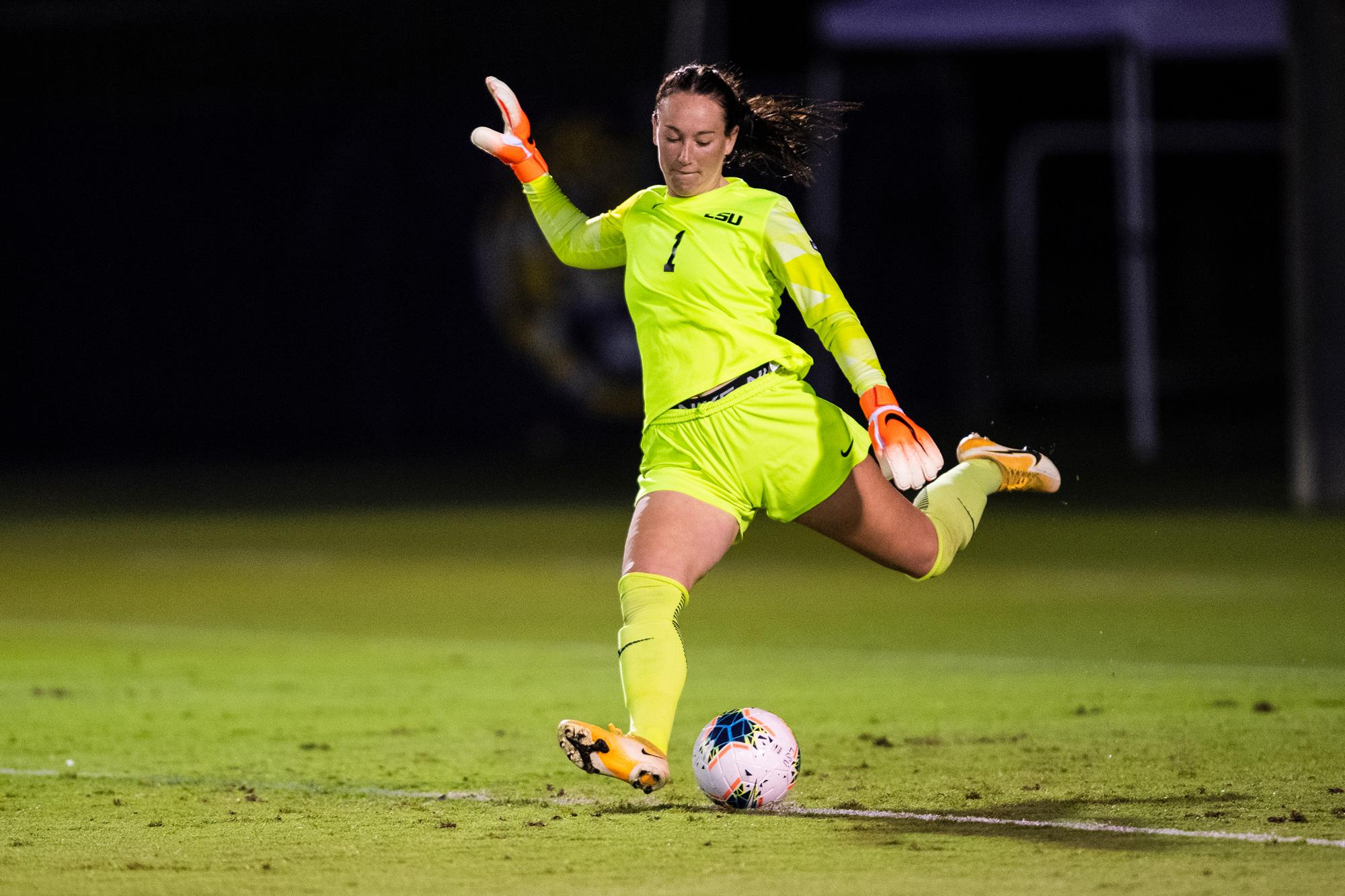 Auburn, Ala. – In the battle of the Tigers, the LSU Soccer team fought to a 0-0 draw on Friday night at the Auburn Soccer Complex. With the draw, LSU moves to 3-7-3 on the season while Auburn moves to 5-4-3.

“I think we had a great start to the game and played very well,” head coach Sian Hudson said. “Our tempo fluctuated in the second half and the first period of overtime, but we picked it up in the second period and just couldn’t convert our chances. There are still many positives to take from tonight’s showing. Our mentality is good and we’ll be ready to turn around and take on a good team in South Alabama on Sunday.”

The match began with LSU on the front foot and showing strength in the first 20 minutes. Redshirt freshman Taylor Dobles had the first chance of the night in the second minute after she carried the ball from midfield into the box for a one-on-one chance but was denied by Auburn goalkeeper Maddie Prohaska. LSU tested Prohaska once again moments later when sophomore Maddie Moreau’s shot on goal in the fourth minute required a save from Prohaska.

Sophomore Mollee Swift was first called into action in the 20th minute, denying a shot from the top of the box with a dive to her right side. Swift’s second save of the night came five minutes later, denying a shot towards the middle of goal from Auburn’s Anna Haddock.

LSU began the second half with quality looks on goal. In the 48th minute, junior Shannon Cooke sent a shot on a free kick from outside the box on frame, requiring Prohaska’s interference.  The 58th minute saw LSU’s best chance of the half as junior Meghan Johnson sent a ball through the lines that found fellow junior Savannah Mills, who took the ball into the box before having her shot collected by the onrushing Prohaska.

Swift was tested multiple times in the second half and came up big for the Tigers. Swift tallied her third save of the match in the 55th minute, catching a shot from outside the box. The 79th minute saw Swift deny another long-range attempt, collecting a ground-skipping shot.

The final moments of regulation saw Swift keep the Tigers level with two saves in the final five minutes. In the 86th minute, Auburn’s Alyssa Malonson sent a belting shot on goal that Swift was able to catch. The final chance of regulation came in the 89th minute, when Haddock sent a shot from 20 yards out that was bound for the corner of the net that was denied by an acrobatic stretch from Swift.

The first period of overtime saw Auburn hold control of the match but failing to put their shots on target. The second period saw LSU flip the script, controlling the tempo but unable to convert. Moreau sent a shot on goal from 16 yards out in the 105′ minute, but she was unable to get full power on it and it was collected by Prohaska. Moments later on an LSU corner, junior Wasila Diwura-Soale was able to get her head on the cross but could not direct it on goal as it flew wide left of the frame.

Each team had one more chance to end the game. Swift registered her seventh and final save of the night in the 108th minute, stopping a strong shot sent to the center of the goal. The final shot of the match came in the final minute, when Dobles’ attempt from just outside the box sailed wide left.

Auburn outshot LSU 16-6, with Auburn holding a 7-5 advantage in shots on goal. With the clean sheet, Swift takes her tally to three in the season, and two in her last two starts.

LSU will conclude the road weekend when they take on South Alabama at 5:00 p.m. CT on Sunday evening on ESPN+.