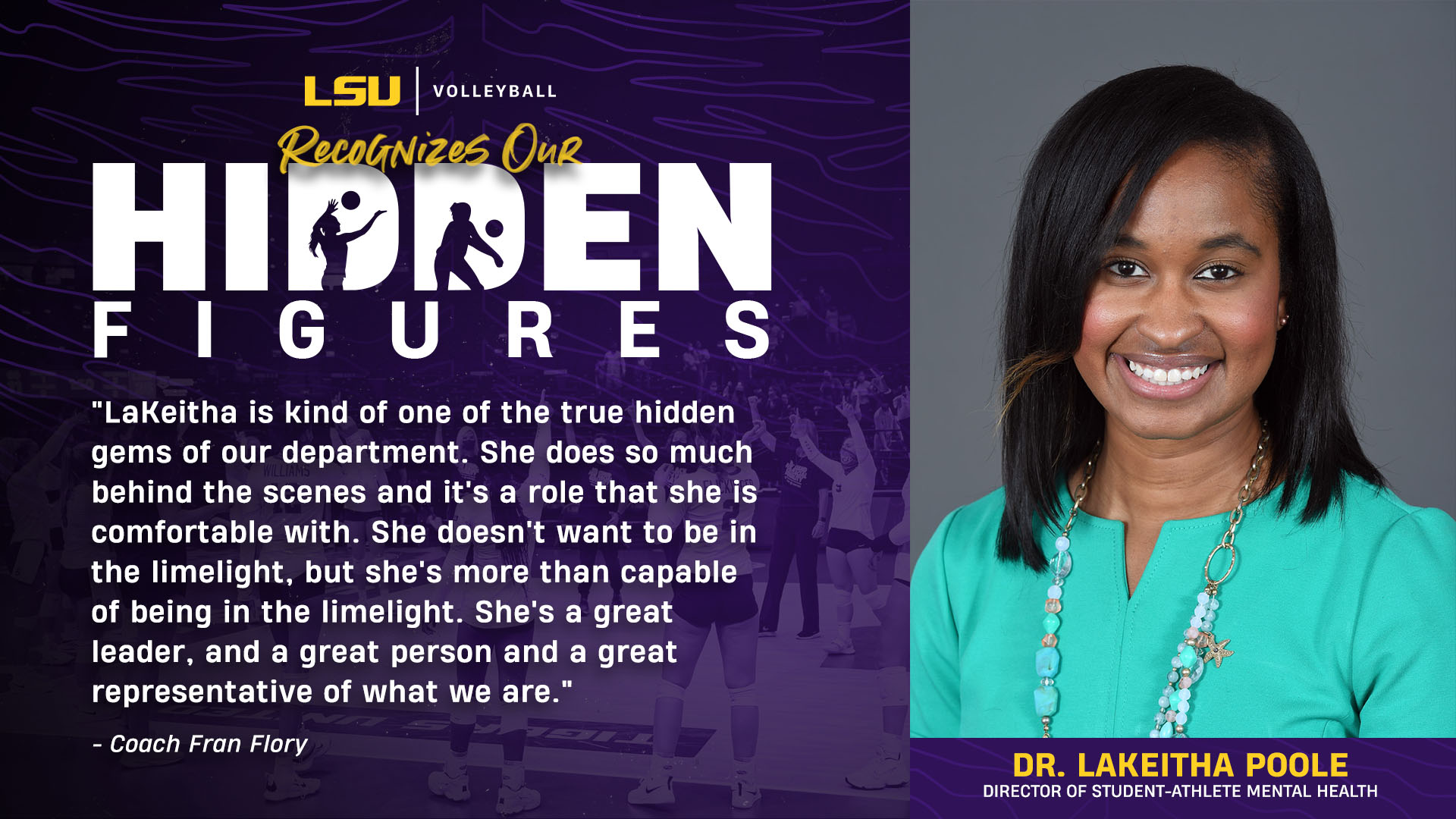 That was true before the pandemic. It’s simply more obvious now.

Dr. Poole is a New Orleans native who grew up playing volleyball. She was displaced from her high school, home, and friends due to Hurricane Katrina. Dr. Poole uses these experiences to help connect to what LSU student athletes have felt in the past year.

“I found myself as a senior in high school in a new city with new classmates, and a much smaller town as a city kid,” Dr. Poole said. “That was hard for me. Really just going through that experience and understanding and watching the people around me learn to cope with something that was out of their control.

“It’s funny, because I always kind of referenced that now with a lot of our student athletes of the disappointment that everybody felt last March, when things just ended abruptly. I definitely know what that felt like. I was a week into my senior year, and everything just shut down, and we had to leave.”

Dr. Poole attended Florida State University after high school. It was there she found her interest and love for psychology and mental health in both clinical and counseling areas. After she graduated from Florida State, she came back to LSU for an MBA and then left Louisiana once again to get a Ph.D in Counselor Education & Supervision from Regent University. Dr. Poole described her journey to the mental health field at LSU as “non-traditional.”

“It’s been awesome to have that experience of going some other places and still coming right back home to a place that feels familiar,” she said. “But to get to do now the work that I feel like I was I was called to do, and had I not had those life experiences by being that Louisiana kid from New Orleans, I don’t know that I would have been on this this path”.

Despite the unconditional path and stops outside LSU and Louisiana, Dr. Poole isn’t the only one who feels like she is fulfilling her life’s calling helping with mental health.

Since arriving back at LSU, Dr. Poole has put in an enormous amount of work to make the Tiger volleyball players more comfortable. Describing herself as goal oriented and focused, Dr. Poole says she’s always working hard on ways to be innovative, to support the girls with issues and adversity they may face both in and outside the sport. This includes anything from one-on-ones with student athletes, meditation sessions, or even preseason retreats to increase comfortability.

“It’s about breaking the stigma regarding mental health in college athletics” she said.

Dr. Poole strives to create an inclusive environment where the girls can identify within themselves and the team.

“The group of women that we have on the team right now are all just awesome people,” she said. “It’s just really nice to get to be a part of something that’s bigger than just a game. It’s always about who they become even when they leave LSU. Because they always represent us. They always represent themselves. Getting to be a part of that, it’s just really cool for me.”

The coaches and players describe her work and presence as one of a comfort-keeper who helps them keep things levelheaded and calm even in times of chaos and competitions.

“I think what she’s best at with our student athletes is for them to understand that they’re not in this alone,” Flory says. “Her ability to have them understand that does provide that calming effect, and that comfort effect that says, not only are there others going through the same thing, but we’re here to support you in the right way. We know how to help you.”