LSU Travels for Road Weekend versus Auburn and South Alabama 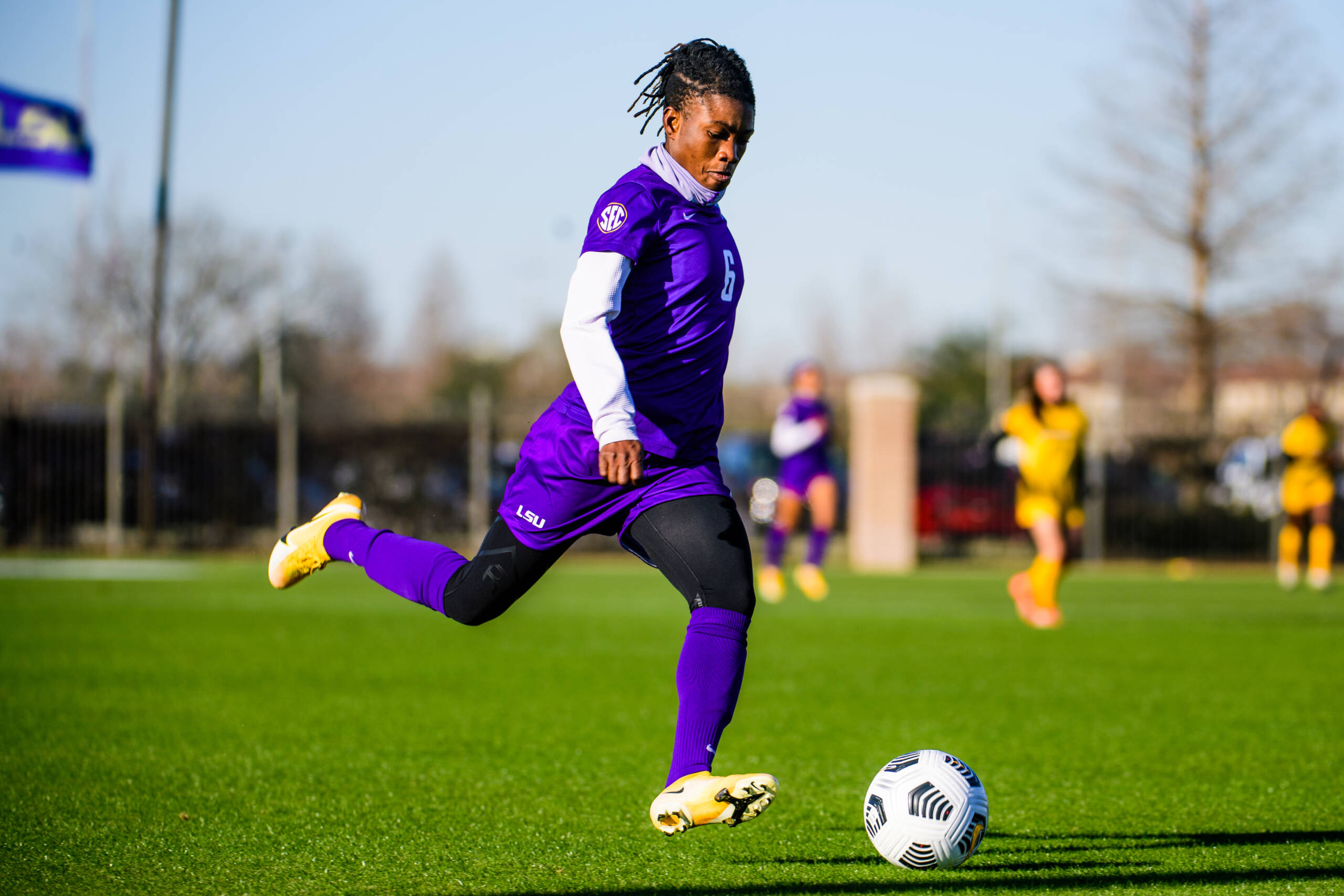 Auburn, Ala. – The LSU soccer team (3-7-2) will travel to Alabama for a weekend of road action, taking on the Auburn Tigers at 6:30 p.m. CT on Friday, February 26 before concluding the weekend with a match against South Alabama at 5:00 p.m. CT on Sunday, February 28. Friday night’s match at the Auburn Soccer Complex will be aired on SEC Network+ while Sunday’s match will air on ESPN+.

LSU and Auburn met on November 2 at the LSU Soccer Stadium, with Auburn claiming a 1-0 win in overtime. The lone goal of the match came in the 93rd minute, when Alyssa Malonson’s cross found Kori Locksley, who tapped in an open goal from six yards out.

LSU is looking for its ninth win against Auburn and first since 2010. The LSU and Auburn series dates back to 1995, where LSU came out on top in a 2-1 contest. Auburn holds the lead in the series at 19-8-3.

This will be the 12th meeting between the two programs, with LSU holding a narrow 6-5 advantage in the series. The teams last met in the regular season in 2018 at South Alabama, where the visiting Tigers grabbed a 1-0 win.

The Tigers have won three out of their last four games, dating back to the fall portion of the season. A Taylor Dobles brace saw LSU defeat Alabama 2-0 in the first round of the SEC Tournament before a Tinaya Alexander brace saw LSU defeat No. 14 Ole Miss in overtime by a score of 2-1 in the second round. The Tigers were knocked out of the tournament in the quarterfinals after a hard fought 1-0 defeat to No. 8 Texas A&M. LSU opened its spring portion of the season with the third win of the season and second clean sheet, a 1-0 win over Southern Miss, thanks to a Molly Thompson goal.

Chiara Ritchie-Williams and Maddie Moreau are serving as team captains this season. Ritchie-Williams is the most experienced player on the squad and she is showing how valuable she is by being utilized in multiple roles. In her first three seasons, Ritchie-Williams anchored the backline for LSU at the centerback position, but for her senior season she has played a key part in the midfield as well as centerback.. She has played in 70 career matches, starting 67 of those, and logged a total of 6,228 minutes. Moreau has played at leftback during her two seasons at LSU. She’s scored one career goal, registered her first career assist against Mississippi State (Oct. 11), and has played a total of 2,552 minutes out of possible 2,833 minutes in 29 career matches.

Redshirt freshman Taylor Dobles has started all 12 games for LSU at striker and has played a key part in LSU’s positive results this season. She ranks second for LSU with eight points on the season (three goals, two assists). She registered her first-career assist on Oct. 11 at Mississippi State, scored her first career goal on Oct. 16 against Missouri, and registered an assist in LSU’s Oct. 23 match against Alabama.

Dobles first career goal came in LSU’s 1-1 draw at Missouri on Oct. 16 in the 38th minute off an impressive counter attack by the Tigers. Meghan Johnson, a junior, started the play with the ball in LSU’s side. She possessed the ball up the pitch for nearly 70 yards before playing Dobles in to the left side of the box. Dobles cleared her defender and beat the keeper to give LSU a 1-0 lead in the first half.

Dobles first career brace came in LSU’s 2-0 victory over Alabama in the first round of the SEC Tournament on Nov. 13. Dobles pounced on a loose ball in the box and scored a tidy finish in the 13th minute before latching on a through ball in the 88th minute and sending a shot from ten yards out on the left side that powered through the Crimson Tide goalkeeper.

Redshirt junior Tinaya Alexander assisted the deciding goal in Friday’s 1-0 victory over Southern Miss. Alexander collected the ball on the right flank, beat two defenders before charging into the box and skipping by one more defender to send a cross across the box, which was tapped in by goalscorer Molly Thompson . The assist was Alexander’s second of the season, and brings her point total to a team-high 12 on the season. The assist also moves Alexander to tenth all time in career assist at LSU with 15 total.

Sophomore transfer Mollee Swift has now played 11 matches in net for the Tigers since arriving in Baton Rouge. The sophomore has collected 54 saves and is allowing 1.26 goals per game with a save percentage of 79.4%.. Her two best saves of the season came against Missouri, including a leaping, game-saving save in the second overtime of that match. One of her saves against Alabama on Nov. 13 made SportsCenter Top 10. She made several spectacular saves to keep LSU in the match against Ole Miss as well.

Sian Hudson enters the 2020-21 season as the seventh head coach in LSU history. She comes to LSU after coaching at the University of Colorado at Colorado Springs where she accumulated a record of 52-10-4 in three seasons from 2017-19. Her win totals in each of the three seasons – 17 in 2017, 16 in 2018, and 19 in 2019 – were the three winningest seasons in program history. She led UCCS to the NCAA Division II Tournament in each of those three seasons which included a run to the national semifinals in 2017.

Molly Thompson has most current goals on LSU’s roster with 7, and Tinaya Alexander follows closely in career goals scored with six. Thompson’s first goal of the 2020 season came on Oct. 23 against Alabama in the 77th minute to level the match at 3-3. She now has seven career goals after her goal last Friday against Southern Miss; three from her freshman season in 2018, two last year, and two this year. Her two-goal performance against Kentucky in the 2019 regular season final earned her SEC Offensive Player of the Week honors.