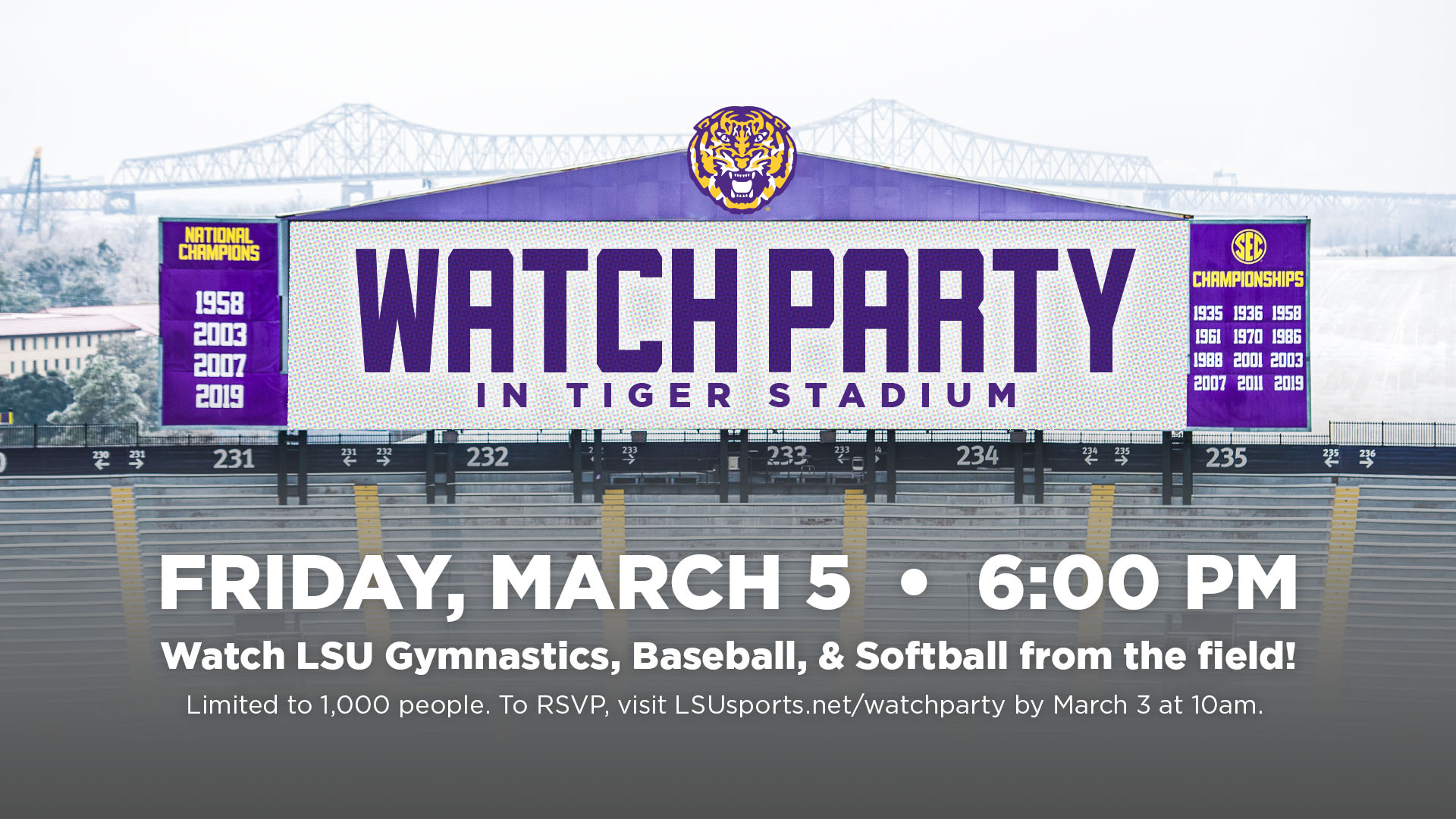 The maximum number of RSVP’s available for the Watch Party has been reached.

BATON ROUGE – LSU fans will have an opportunity to watch three Tiger sporting events from the field in Tiger Stadium on Friday, March 5, when the athletic department hosts a “Watch Party” in Death Valley.

This free event will be limited to the first 1,000 fans who sign up.

LSU hosts three televised sporting events on campus that night and those at the watch party will be able to see all of the action on the big screens in Tiger Stadium.

The following events will be shown on the big screens in Tiger Stadium:

Gates to Tiger Stadium open at 6 p.m. and fans will enter through the TV/Media Gate which is located on the west side of Tiger Stadium near the Lawton Room. Fans are encouraged to bring their own food and drinks (glass of any kind is prohibited). Ice chests, containers or any other items to carry food and drinks will be allowed.

All seating for the watch party will be on the playing surface in Tiger Stadium. There will be no access to any seats in the bowl of the stadium. Fans should plan on bringing their own blankets, mats, or chairs to the event. Fans will be seated in pods which will be drawn on the field to observe social distancing and COVID-19 protocols. In addition, the wearing of masks will be required except when actively eating or drinking for entry.

Other highlights of the night include a t-shirt giveaway to the first 300 fans through the gates, an appearance by Hall of Fame gymnastics coach D-D Breaux at 6:40 followed by an appearance by the nation’s No. 1 ranked beach volleyball team and coaching staff at 6:50.

There will also be ticket giveaways to that night’s LSU gymnastics meet and baseball game.

Parking for the event will be complimentary in Lots 101, 104, 105, and 404. The event will conclude following the final event of the night, which will be at approximately 10 p.m.

This Week: A report on Dennis Shaver’s Track & Field Hall of Fame induction, and the naming of NCAA champion jumper Juvaughn Harrison as the Bowerman Award winner; highlights of the women’s basketball win at Auburn; and the dedication of Dale Brown Court at the Maravich Center.
Skip To Main Content