No. 1 Beach To Begin Season in Houston 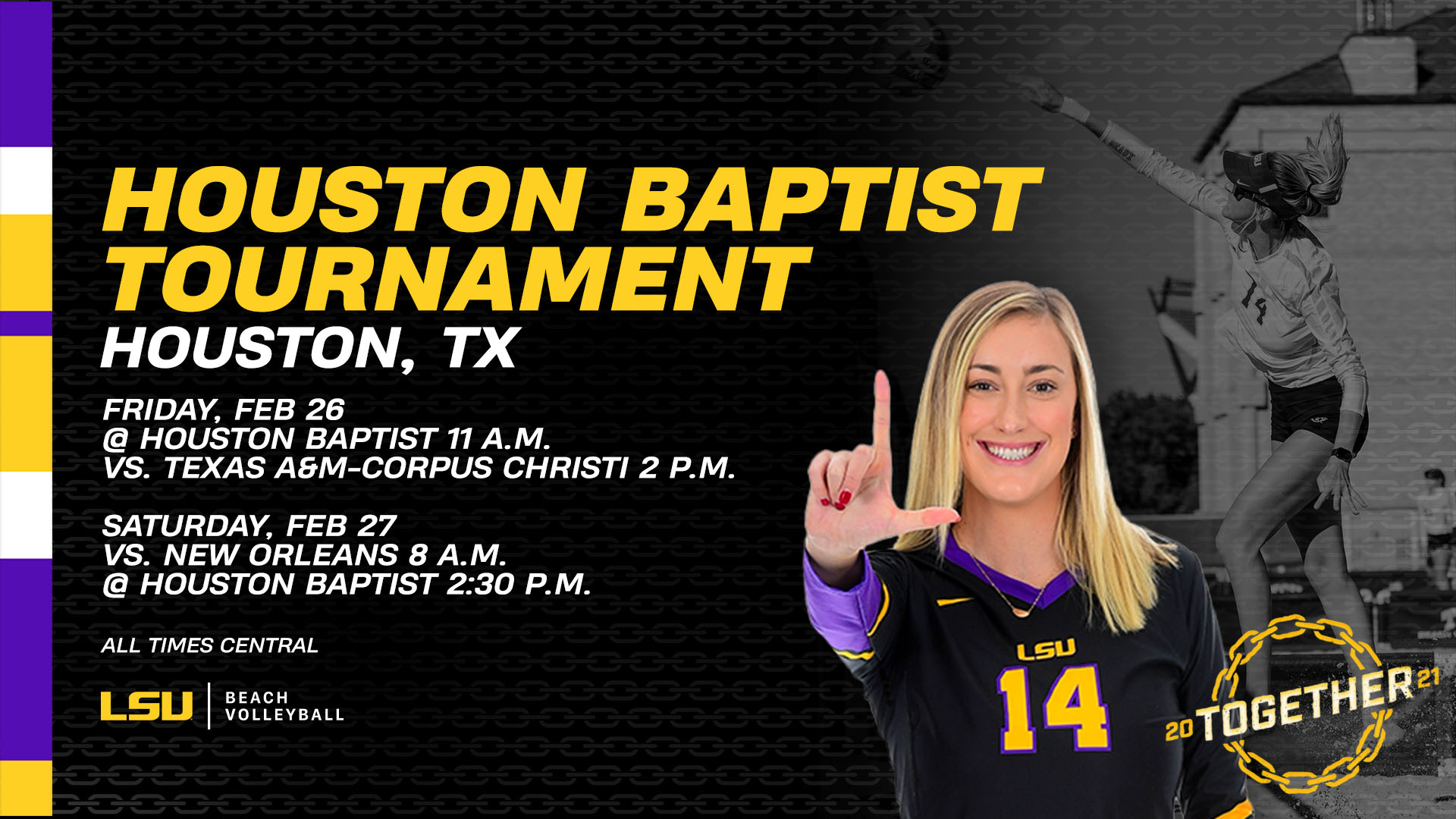 HOUSTON – It’s been nearly a year since the Tigers last took to the sand, but on Friday and Saturday the No. 1 LSU Beach Volleyball team will be back in competition at the Houston Baptist Tournament for four matches.

“I try not to think about how many days it’s been since we put on the jerseys and got to play somebody else,” said Coach Russell Brock. “Now we can look forward to something that is really close and we’re really excited to be doing it again. We’ve got a great squad so we have high expectations.”

LSU will face Houston Baptist Friday in its first match of the 2021 season at 11 a.m. CT followed by Texas A&M – Corpus Christi at 2 p.m. On Saturday the Tigers will take on New Orleans at 8 a.m. and they will finish against Houston Baptist once more at 2:30 p.m. Fans can follow @LSUBeachVB on twitter for in-match score updates.

“It’s been so long since we last competed so I think everyone is just excited to compete again,” said senior Kristen Nuss who was just named CCSA Preseason Player of the Year.

When the 2020 season ended LSU was on a surge, having won 11 matches in a row and taking over the No. 1 spot in the rankings for the first time in program history. The last time LSU took to the courts was March 7 in Fort Worth, just under one year ago.

“It’s really exciting,” said senior Taryn Kloth of starting the season. “It’s been a long time coming. We’ve been waiting to play for so long.”

The Tigers enter the 2021 season in that same position, as the nation’s top team that returns every contributor from last year’s squad. Everybody was invited to come back due to the shortened season and by the turn of the semester all six seniors from last year’s team had decided to return and finish what they originally had come here to accomplish – Kristen Nuss, Claire Coppola, Taryn Kloth, Toni Rodriguez, Jess Lansman and Olivia Ordonez.

“What LSU Beach Volleyball has going on is something that is extraordinarily special,” said Ordonez.

“The approach has definitely not changed,” explained Nuss. “We still have that national championship goal. Being No. 1, we’re not really satisfied with it. Yes we’re No. 1 to start the season, but we want to be No. 1 to end the season.”

Coppola, Kloth and Nuss were recently named the the CCSA Preseason All-Conference team. Junior Ashlyn Rasnick-Pope was named on the Preseason Watch List too.

Below them though, the Tigers feature a bevy of talent throughout each class. Lineups have not been set, but there is a list of players all the way down the line that could be impact players. With such a heap of talent, settling on a lineup has not been easy.

“Every year we try to figure out how to be better than the year before,” said Brock. “With every single piece back, you’ve either got to hope that everybody has improved or maybe you tweak some things. That’s the process of working our way through the season and looking at options within the competitive environment that may give us that leg up.”

The last time LSU was home, its fans set a record – 2,407 in attendance – for the largest crowd to witness an on-campus college beach volleyball match when No. 2 LSU defeated No. 1 UCLA at LSU Beach Volleyball Stadium last year on the final night of February. The Tigers will make their 2021 home debut next weekend for the Tiger Beach Challenge when they host Florida Atlantic, Florida State, Georgia State and Houston Baptist – although it will look different.

This year LSU is not allowing the general public into matches in order to comply with public health guidelines. In order the be admitted into matches, you have to be on a pre-approved list of player or coach guests. Those on the list will be limited to sitting in the stadium seating on the South side of the facility.