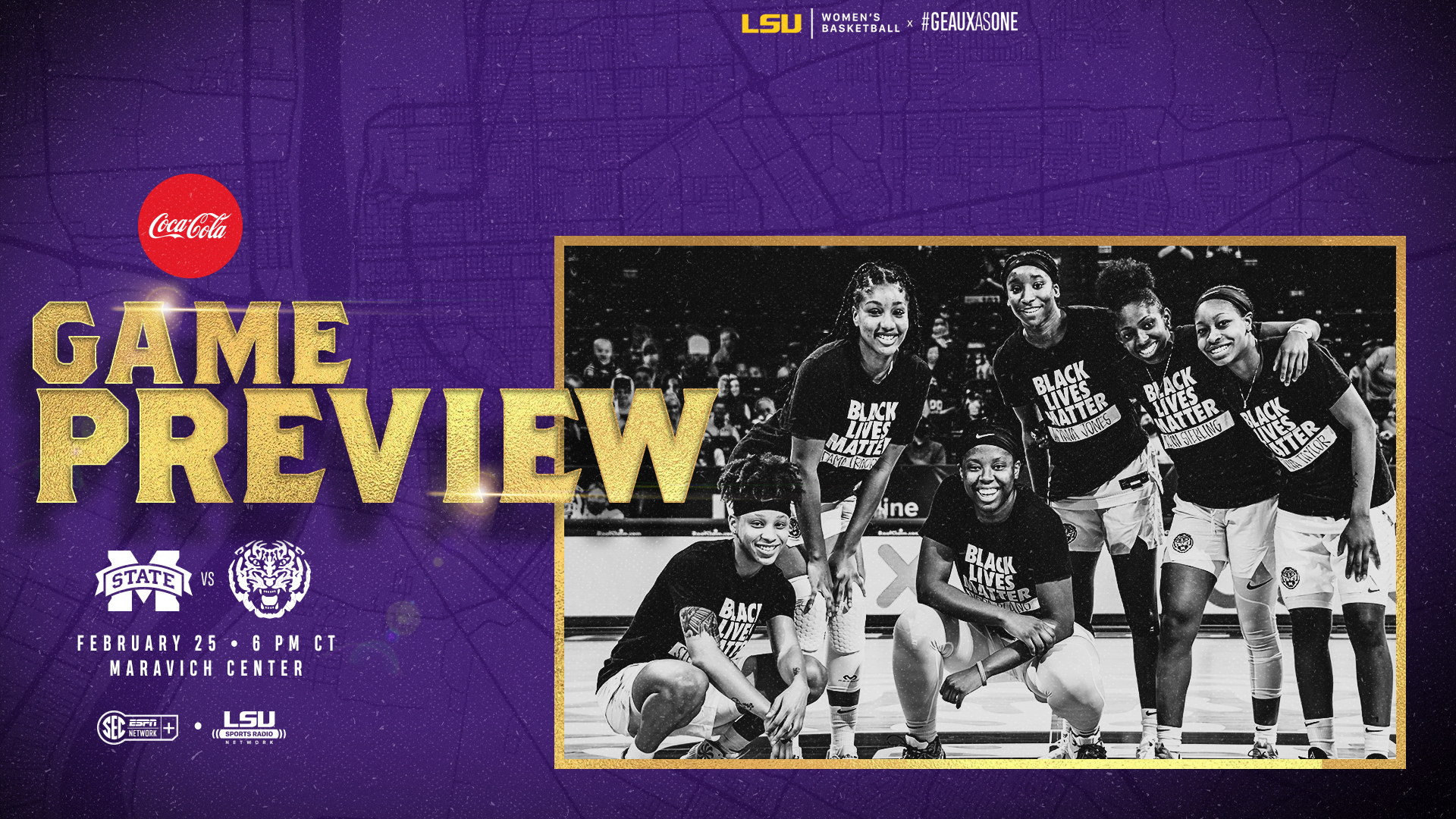 BATON ROUGE – The LSU women’s basketball team hosts Mississippi State on Thursday, February 25 at 6 p.m. CT at the Pete Maravich Assembly Center in its new regular season finale. The Tigers originally were scheduled to play Vanderbilt on Sunday, February 28 before the Commodores opted out of the 2020-21 season in January.

LSU will recognize Joanette Batiste Boutte during the game as part of Black History Month and the Historical Hidden Figures initiative sponsored by the Advancement of Blacks In Sports (ABIS) and Black Leadership Association for Athletes, Administrators and Coaches (B.L.A.A.A.C.). Boutte was the first Black women’s basketball and volleyball player at LSU, beginning in 1975. She still ranks No. 4 on the LSU career rebounds list with 1,017 boards and No. 7 on the single season rebounds list with 402 during her freshman season in 1975-76. In 1979, she was the seventh pick by the Dallas Diamonds of the Women’s Professional Basketball League (WBL).

Thursday’s game will be broadcast on SEC Network Plus with Lyn Rollins and Victor Howell calling the game. Fans can watch SEC Network Plus over the internet at ESPN.com/watch or on the ESPN app. A link to the game is available on LSUsports.net.

The games will also be broadcast on the LSU Sports Radio Network and locally in Baton Rouge on 107.3 FM. Voice of the Lady Tigers Patrick Wright, in his 31st season, will be on the call from courtside in the PMAC. A links to live stats is available at LSUsports.net.

LSU is 8-11 on the season and is in eighth place at 6-7 in the SEC following last Sunday’s 74-64 loss against No. 18 Arkansas. Senior Khayla Pointer led the Tigers with 24 points, followed by classmate Jailin Cherry with 16 points and a team-leading nine rebounds.

Pointer leads LSU with 16.6 points and 4.2 assists per game to go along with a team-high 45 steals. Pointer became the eighth Tiger in school history to dish out 400 career assists on Jan. 28 at Georgia. She currently sits at No. 23 on LSU’s career scoring list with 1,249 points.

Redshirt senior Faustine Aifuwa became the second Tiger to record over 180 career blocked shots on Feb. 21 against South Carolina, joining LSU legend Sylvia Fowles. Aifuwa is currently in 15th place on the career rebounds list with 727, the 16th LSU player to record over 700 career rebounds. She needs two rebounds to move into 14th place on the list, passing Seimone Augustus.  To become LSU’s 35th 1,000-career points scorer, Aifuwa needs 33 points. Aifuwa continues to lead LSU with 8.7 rebounds per game and 32 blocked shots this season, and is the second-leading scorer on the team with 11.4 points per game. She recently took over the top spot on the team leaderboard for field goal shooting at 43.7 percent.

Sophomore Tiara Young, a strong candidate for SEC Sixth Player of the Year honors, is providing a key spark off the bench averaging 8.9 points and 3.8 rebounds per game and is second in shooting at 43.4 percent from the field.

Mississippi State is 9-7 overall and 4-6 in SEC play this season, right behind LSU in ninth place. The Bulldogs are led in scoring by Rickea Jackson at 16.1 points per game. Jessika Carter is second in scoring with 14.9 points per game and leads the team in rebounds with 9.1 per game and 24 blocked shots. Aliyah Matharu also averages double-figures in scoring at 10.3, coming primarily off the bench. Myah Taylor runs the point and leads the team with 70 assists and 26 steals.

This will be the 62nd meeting between LSU and Mississippi State. The Tigers lead the series, 47-14 and are 23-4 against the Bulldogs in Baton Rouge.

Single game ticket prices are $7.00 for adults and $5.00 for youth ages 3-12. To order tickets for the Mississippi State game, go to LSUtix.net.