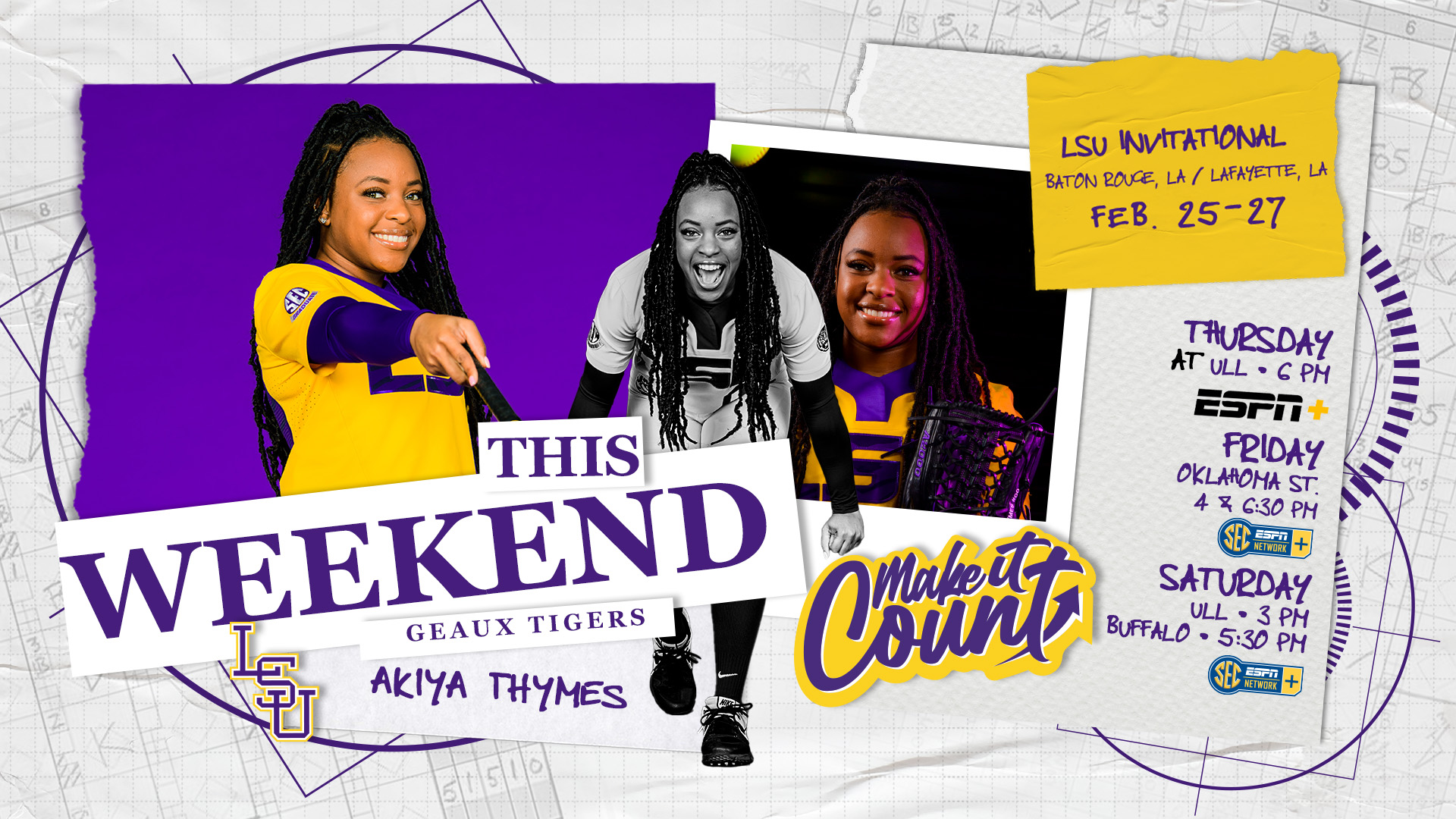 BATON ROUGE – After a doubleheader sweep of Central Arkansas, the No. 11/13 LSU Softball team (7-3) will look to continue that momentum into the LSU Invitational this weekend, playing host to UL-Lafayette, Oklahoma State and Buffalo. The Tigers will start off the tournament with a single game in Lafayette Thursday with ULL at 6 p.m.

Thursday’s game will air on ESPN+, which is a paid subscription. All games in Tiger Park this weekend will stream live on SECN+ and the WatchESPN app with Hall of Famers Lyn Rollins and Yvette Girouard on the call.

For a full schedule on the weekend and directions to Lamson Park, click here.

About the Tigers
The Tigers go into the weekend with a 7-3 overall record after sweeping Central Arkansas in a doubleheader on Tuesday. Ali Kilponen and Shelby Wickersham both threw shutout games Tuesday, combining for 20 strikeouts in 14 innings. Ciara Briggs has been a bright spot in the lineup as she is hitting .423 on the year with five of her 11 hits, coming for extra bases. Shelbi Sunseri leads the pitching staff with a 0.40 ERA and is 3-1 in four appearances. In 17.1 innings, she has struck out 13 batter.

Oklahoma State (9-0)
The Cowgirls head into the weekend with a 9-0 record. Chyenne Factor is leading the team at the plate with a .542 average. She is 13-for-24 with two doubles, a home run, six RBI and nine runs scored. Kelly Maxwell is leading the pitching staff and has not allowed a run in three appearances. She is 3-0 and has struck out 24 batters in 12.1 innings.

Buffalo (0-4)
Buffalo comes into the weekend looking to secure their first win of the season. Madison Fernimen is leading the team with a .364 average at the plate. She is 4-for-11 and has three doubles and a home run in four games. The pitching staff has a collective ERA of 5.12 and Ally Marcano and Julia Tarantino have both suffered two losses. Marcano leads the staff with 10 strikeouts in 6.1 innings of work.

What’s On Deck
The Tigers will continue their nonconference schedule next week, playing host to Southern Miss Tuesday at 6 p.m. The Tigers will matchup with nationally-ranked Texas next weekend, March 5 & 6, for a three-game series in Tiger Park.