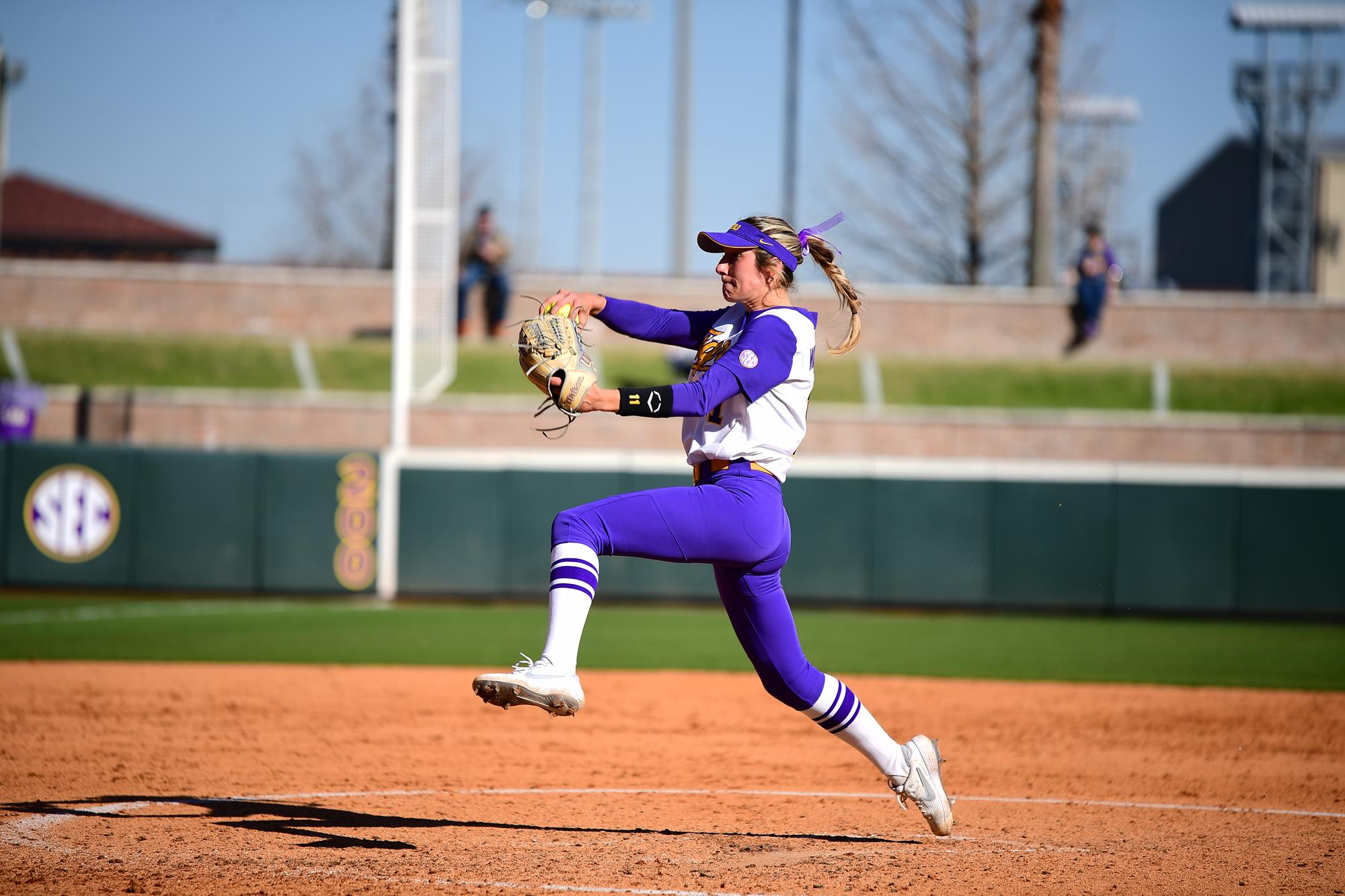 BATON ROUGE – The LSU softball team picked up a pair of shutout victories against Central Arkansas Tuesday afternoon in a doubleheader at Tiger Park. The Tigers move to 7-3 on the season while Central Arkansas falls to 3-7.

This weekend the Tigers are set to play in the ULL/LSU Invitational, starting with a road game Thursday at No. 9 ULL at 6 p.m. in Lamson Park. This game will be available on ESPN+ and via live stats. The Tigers will face Oklahoma State in a doubleheader Friday at 3 p.m. and will close out the weekend Saturday against ULL at 3 p.m. and Buffalo at 5:30 p.m.  All games at Tiger Park will stream live on SECN+.

Central Arkansas was able to put a runner on in the top of the second, but Taylor Pleasants and Taylor Tidwell connected in the middle with a huge double play to get the Tigers out of the inning. In the bottom of the second the Tigers got on the board first, Ciara Briggs added her first career triple and was driven in on a sacrifice fly from Tidwell.

In the top of the fifth the Bears threatened with runners on second and third with two outs, but Shelby Wickersham added a huge strikeout to end the threat.

The bats came around again in the bottom of the sixth as Aliyah Andrews got it started for the Tigers with an infield single and stolen base. She advanced to third on a deep fly ball from Pleasants. Doyle muscled a single through the left side to plate Andrews and add an insurance run for theTigers. Georgia Clark was also able to push a single through the left side and plate Akiya Thymes, who entered to pinch run at second. The two-run inning gave the Tigers a 3-0 lead the rest of the way.

In the top of the seventh, Wickersham was able to add two big strikeouts to keep the Bears off the board and close out game. She earned the win in the circle and moves to 2-1 on the season. She added six strikeouts in the game.

Ali Kilponen was hot in the circle for the Tigers, striking out the first three the Bears in the top of the first.

Andrews got the bats started for the Tigers, singling up the middle to put the first Tiger on base in game two. She added another stolen base on the day and capitalized on a miscue from the Bears to advance to third. Pleasants launched her fourth homerun of the season over the left field wall to put up two runs for the Tigers.

In the bottom of the fourth the Bears threatened with their first hit of the game but Kilponen was on fire and struck out the next three batters to retire the side.

The Tigers defense was able to keep central Arkansas off the board late in the game and were able to close out the 2-0 victory.

Ali Kilponen recorded a huge night in the circle for the Tigers with 14 strikeouts, just one short of her career high. She moves to 1-1 on the season.

Andrews went 2-for-2 in the game while Pleasants went 1-for-3 with her fourth home run of the season, adding two RBI on the night.

“We needed good pitching today for a lot of reasons. Not just to win the game but for our mentality. Central Arkansas had a ton of opportunities to score but to have two errorless games on defense made us feel good. I think if we can have a game where all three parts show up at the same time, we’re going to have a good team.”

“There are still a few things we have to clean up, but I thought she looked really good. She needed that for her mentality and just to come out and execute how we have seen her at practice all the time and finally bringing that to a game was exciting.”

“We’re lucky to have her. She’s always going to give you her best effort. She gives us a lot of opportunities to win ball games, on both sides of the ball, especially when she comes up to the plate.”

On the win today…

“I think we needed it for our mentality, especially going into this weekend where we’re going to play some really good, ranked opponents. You know Central Arkansas is a great team and to kind of get us headed in the right direction mentally that we’ll need to be in for the weekend.”