Tigers Drop Game To No. 18 Arkansas 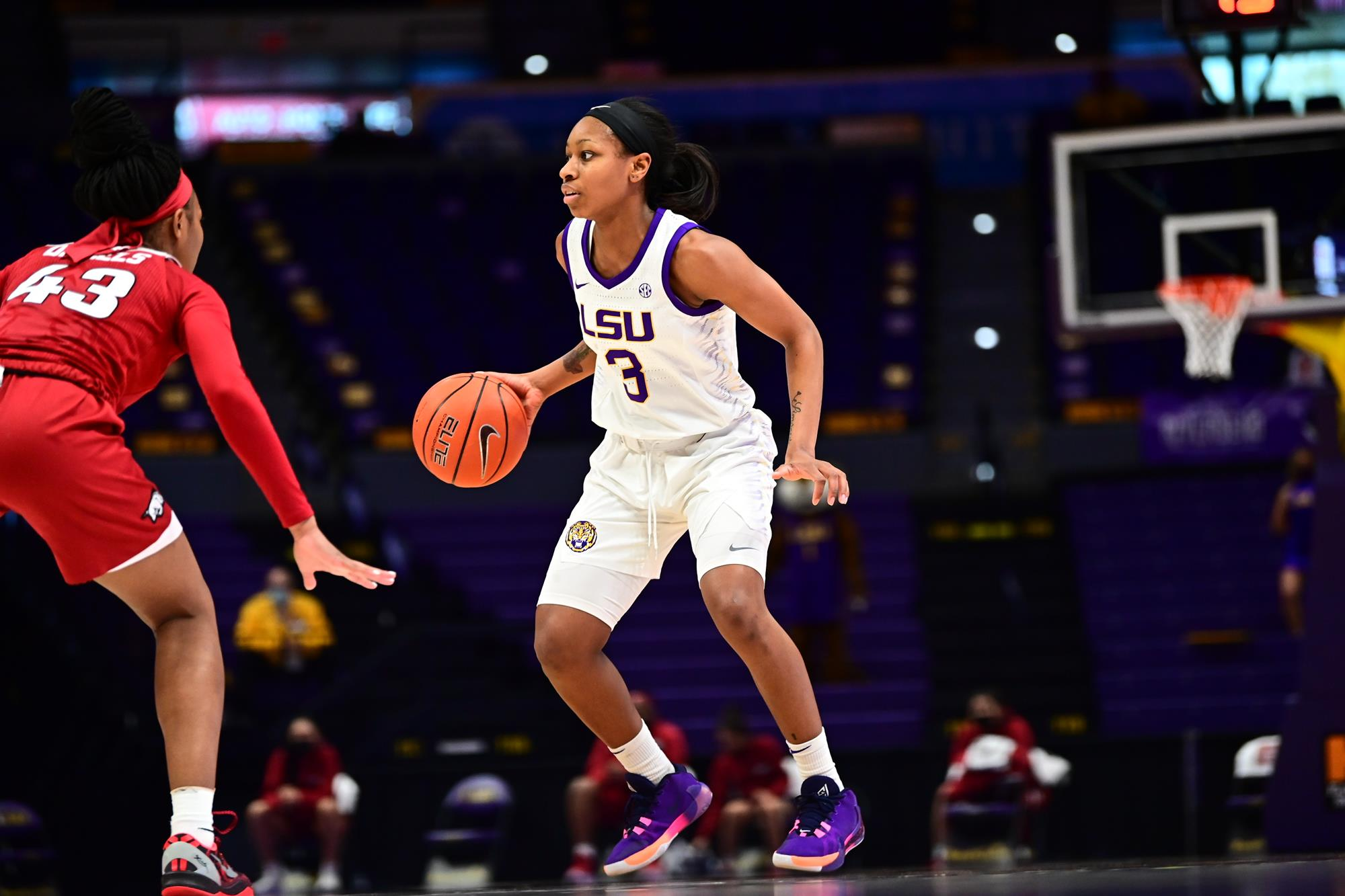 BATON ROUGE, La. – Despite a valiant comeback effort in the fourth quarter, the LSU women’s basketball team was unable to upset No. 18 Arkansas, losing by a 74-64 score Sunday night in the Pete Maravich Assembly Center.

Senior Khayla Pointer led the Tigers in scoring with 24 points, adding five rebounds and three assists to round out her stats line. Her scoring output was good enough to move up a spot in the all-time scoring list for LSU. She surpassed Scholanda Robinson (1,229; 2001-06) and now sits at No. 23 with 1,249 career points.

Pointer’s three assists were also enough to move her up a spot in LSU’s all-time career assists list. She is now tied with LeNette Caldwell (420; 1974-80) sitting at No. 7.

Junior Ryann Payne scored her first career points in a Tigers’ uniform. She finished with six points and collected three rebounds and one assist, all firsts of her LSU career.

Senior Jailin Cherry was also a bright spot for the Tigers, finishing with 16 points and adding a season-high nine rebounds.

“When you play a team that shoots the three-ball extremely well, you have to be locked into the scouting report defense. We did exactly the opposite of what we had practiced. I’m disappointed in how we guarded because when you can take away something that a team like Arkansas does really well, which is shoot the three and dribble drive and force them into two’s, it might give you a chance at winning a ballgame or two against them. You definitely can’t come out the gate starting down 10 and then you’re playing catchup, and that’s what we did. In the second half, we changed our defense and that’s on me. I changed our defense and I changed our lineup. I went with players who I thought were going to be more disciplined in running our defense the way that it needed to be run. I thought in the second half we did some good things. We were more efficient offensively than we were in the first quarter. We still have some life in us, so I don’t want this game to continue to linger over us, but we do need to learn from it.”

On losing Tiara Young to injury in first quarter…

“Tiara is that player that you can move Khayla Pointer off the ball when she comes in. She can also create, she is a really good offensive threat for us and has been. She is a key for us. She is one of our better offensive players. We hope to get her back. I will say, we had some players that played really tough. She hadn’t played a lot of minutes lately, but I thought Sarah Shematsi gave us some good minutes. I thought Ryann Payne, with her effort, she did some things to help us. You obviously need more when you play a team like Arkansas. Destiny Slocum just really had her way with us. We were going under instead of over. She is smart and crafty. We wanted to go to our denial defense and force backdoors. I can live with that, because we were playing for the backdoor, but we weren’t playing for her to just maneuver around the three-point line like she did.”

The Tigers will stay in Baton Rouge and take on the Mississippi State Bulldogs in the Pete Maravich Assembly Center on Thursday, February 25. The matchup will be streamed on SEC Network Plus at 6 p.m. CT. As always, fans are encouraged to tune into the LSU Sports Radio Network, broadcasting on 107.3 FM in Baton Rouge, with Voice of the Tigers Patrick Wright calling the action.