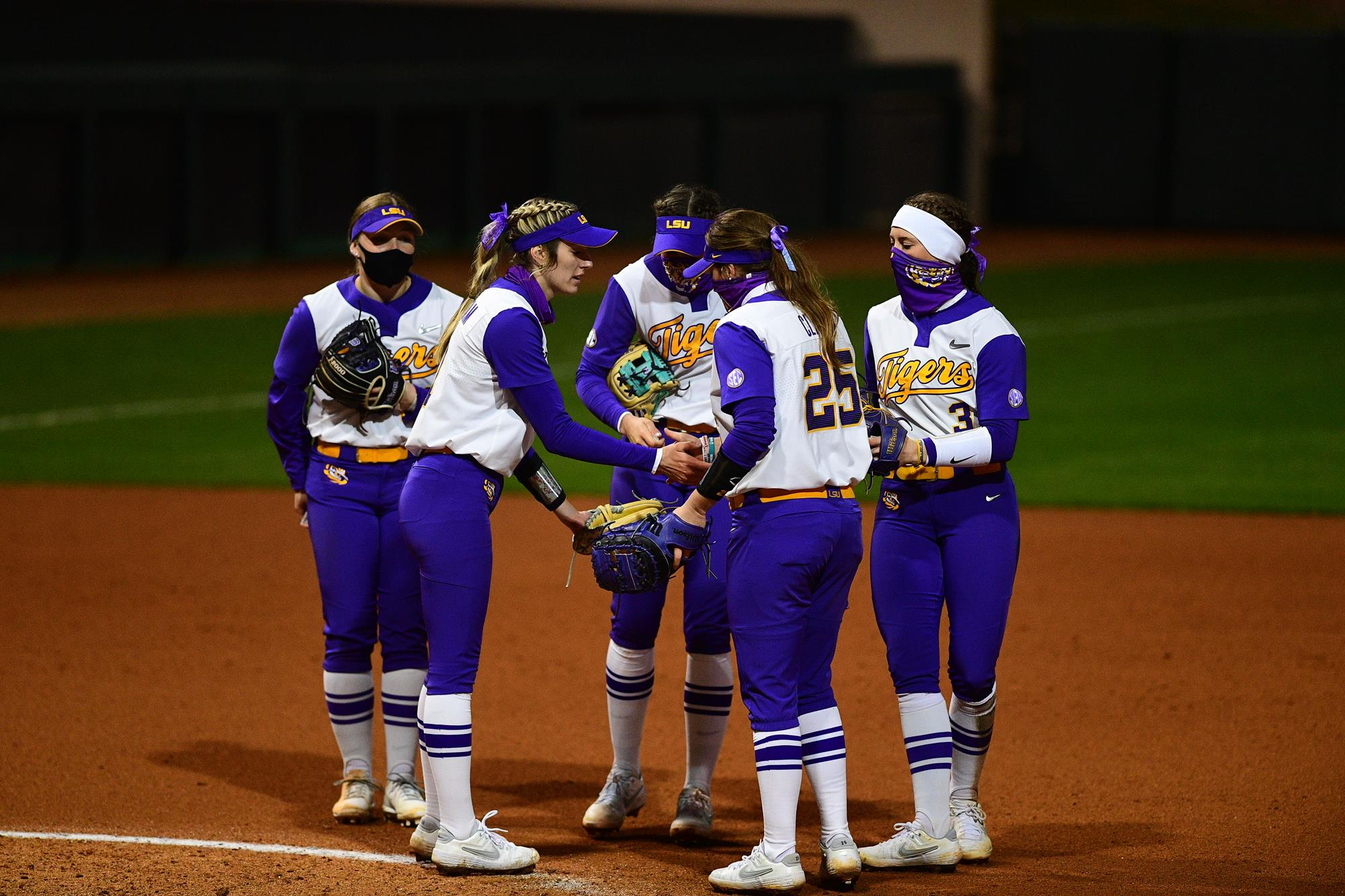 TUSCALOOSA, Ala. – LSU softball bounced back Sunday morning with a 8-5 win over Liberty but fell again to Alabama in game two, 13-5 in five innings. The Tigers are now 5-3 on the season while Alabama moves to 8-0.

The Tigers face Central Arkansas on Tuesday in a doubleheader starting at 2 p.m. Both games will stream live on SEC Network+.

The Tigers bats were hot out the gate in game one. Aliyah Andrews led off with a double to left and Taylor Pleasants followed with her second home run of the season over the left field wall, giving the Tigers a quick 2-0 lead. Two outs later, Shelbi Sunseri smashed a ball over the centerfield wall, her third home run on the year, extending the Tigers’ lead to 3-0 in the first.

Liberty answered in the bottom of the second with a two-run home run off Ali Kilponen. The Flames scored another urn in the third to tie the game up 3-3.

LSU answered that run in the top of the fourth off a Danieca Coffey hard-hit triple to left field, scoring Ali Newland from first to make it 5-3. Newland singled to shallow right field to start the rally for the Tigers.

The Flames led off the fourth with a double to center. The Tigers made a change in the circle, going to Sunseri, but the Flames were able to capitalize on an error and get one across to cut the Tigers’ lead to 5-4.

The Tigers tacked on three more runs in the sixth. With one out, Coffey drew a walk and moved to second on Andrews’ single to left. The two came in on Pleasants second dinger of the game, a three-run shot to center.

Liberty scored another run in the seventh but Sunseri and the Tigers got out of the inning to claim the win.

Sunseri held down the circle to earn the win. She improves to 3-1 on the season.

The Tigers got on the board first in the first inning. Pleasants hit a high fly ball to left and made it to third. She then would score on an Amanda Doyle deep sacrifice fly to take a 1-0 lead.

Alabama answered in the bottom half of the first with three runs but the Tigers answered to that with a Morgan Cummins smash over the left field fence to tie the game up 3-3.

The Crimson Tide bats continued in the bottom of the second as they scored two runs on three hits, taking a 5-3 lead on the Tigers.

After a scoreless third for both teams, Taylor Tidwell came up big for the Tigers as she belted out a two-run home run over the centerfield wall, plating Cummins, who was hit by a pitch.

Alabama scored four runs in the fourth and four more in the fifth to defeat LSU in five innings.

Wickersham took the loss for the Tigers, dropping to 1-1 on the year.