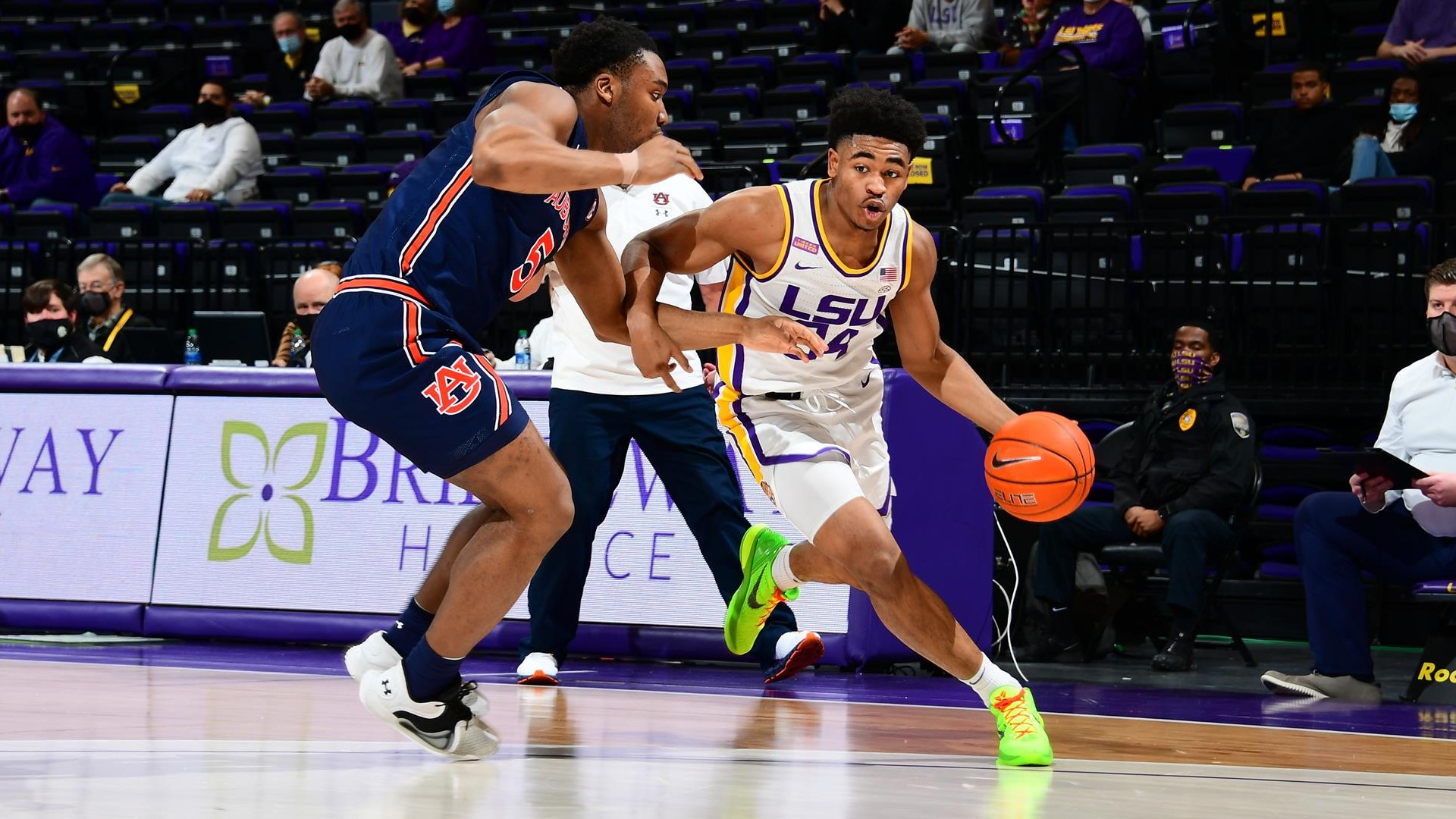 BATON ROUGE – The LSU Tigers made it three straight wins and put themselves into a second-place tie in the Southeastern Conference with a convincing 104-80 win over Auburn Saturday afternoon in the Pete Maravich Assembly Center.

The Tigers are now 14-6 overall and 9-4 in the SEC, tied with Arkansas (The Razorbacks did not play because of a postponement of their game with Texas A&M).).

Cameron Thomas finished with 27 points with three treys and 10-of-11 at the line, while Trendon Watford was back on his game with 18 points and 11 rebounds.  Darius Days hit four treys with 17 points and Javonte Smart had 16 points and six assists. Josh LeBlanc Sr., had his first LSU double double, playing 22 minutes off the bench, scoring 12 points to go with 10 rebounds. He was 6-of-6 from the field.

Freshman Sharife Cooper led Auburn with 26 points, while Allen Flanigan had 13 points and JT Thor getting 10.

Auburn jumped out to a quick 5-0 lead as it took LSU some 90 seconds to get going before Thomas hit his first three-pointer. But then the LSU offensive got cranked up going a 13-0 run that would put LSU up, 18-10, with 14:56 to play. LSU’s defensive play was leading to offensive buckets and the run extended to 21-4 to push the LSU lead to 26-14.

LSU would lead 50-34 at the intermission.

In the second half, LSU continued to push the offensive pace, building as much as a 28-point advantage with less than four minutes to play.

LSU has won 18 consecutive games when scoring 100 or more dating back to that Arkansas game in 1994.

LSU finished the game with 50 points in the paint to 38 for Auburn with a 25-13 advantage on fast break points. All 12 players that dressed saw action in the game with nine players scoring.

The Tigers are on the road for two games next week starting on Tuesday night at 6 p.m. CT at Georgia. Next Saturday, LSU is scheduled to play at Arkansas. LSU’s next scheduled home game is March 2 against Vanderbilt.

Opening Statement…
“Good win. I know we guarded well. I know they scored a lot of points, but the game was high possession. We held them under 40 field goal percentage, 37%. We did a nice job on the back boards. We had a lot of contributions. Obviously, our big four played great. Aundre Hyatt did a tremendous job. We were jamming (Sharife) Cooper. Spent a lot of energy jamming him. Spent a lot of energy defensively to jam him, slow their transition game down. Especially in the first half. (Josh) LeBlanc did a nice job. (Eric) Gaines came in and did a nice job. Mwani (Wilkinson) made that play at the rim on the block. He did some really good things. Overall, I thought it was a good team win. I thought it was good to get (Eric) Cook and (Josh) Gray in there as well and Brandon (Egemo) and Parker (Edwards) who work really hard in practice. Very pleased. I thought we prepared well, and I thought it was a good solid win.”

On his defense and how they were able to slow Auburn’s offense down …
“I thought our defense led to our offense. We were able to get the stops. We were able to get out on offense. We outscored them 25-to-13 in transition. We basically doubled them up in transitions. Did a phenomenal job on the offensive glass. Hyatt and LeBlanc especially were sending a message early on. I thought that they did a great job. I thought we played pretty well in both phases. Any time you shoot over 50% and hold the other team under 40%, if everything else is somewhat manageable, you’re going to have a great chance to win. I thought that we did that today.”
—
Forward Trendon Watford
On the play of Josh LeBlanc…
“I would say that we are getting more comfortable with each other, and trust each other even more and that’s what we have been doing for the last games, and everyone has been contributing to it for a team win. Josh (LeBlanc) brought what he brings every day in games and practices. That’s just Josh. He has always been that type of player, and that is what he will continue to be.”

On tweaking ankle in first half…
“So what happened in the first half was that Trendon (Watford) was driving to the basket, and the ball came from the right side of the rim and I tried to make an effort. That led me to come down on JT Thor’s foot and I went down and rolled out of bounds. I went back, got taped, and did some jumps, but Cam (Thomas) and Javonte (Smart) were throwing baskets, and Josh (LeBlanc) had a great game. Everyone had a great game, a team win and we are going to continue it every week.”
—
Auburn Head Coach Bruce Pearl– Postgame Quotes
Opening Statement…
“I’m disappointed in our team, in our play, executions, preparations, and in how we competed. I let the guys know that these are your matchups. Who wants Cam Thomas, Trendon (Watford), or Javonte (Smart)? There wasn’t any of that, and that was a problem. I don’t know if this was our worst game since Gonzaga, I knew what we were up against with Trendon, Darius (Days), Javonte and Cam. They are all good players. I just don’t think that they’re that much better than our players. However, they played it, and that’s why I’m very disappointed.”