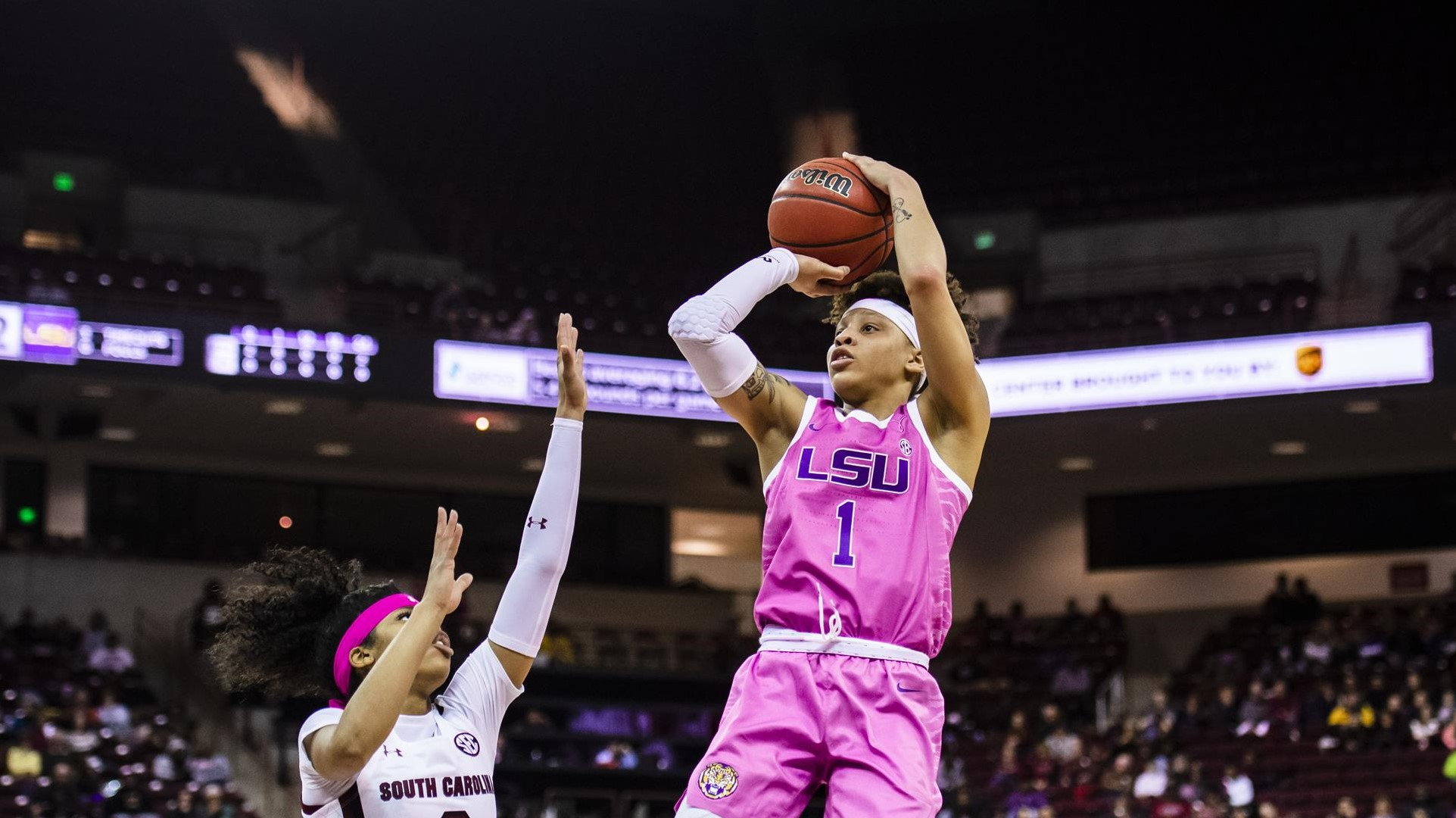 COLUMBIA, S.C. — LSU’s attempt to give the No. 1 South Carolina Gamecocks their first Southeastern Conference loss in their last 28 contests looked promising late in the game with energetic defensive sequences that led to fruitful offensive possessions, but the women’s basketball team came up just short, falling by a 66-59 score inside Colonial Life Arena Sunday afternoon.

Redshirt senior Faustine Aifuwa needed three blocks to move into second on the all-time LSU blocks list coming into the game. She collected three in the first half alone, giving her 178, which tied former Tiger Julie Gross (178; 1978-80). In the second half, she came away with four blocks and becomes the second Tiger—along with Sylvia Fowles (321; 2004-08)—to surpass 180 career blocks. Aifuwa sits in second with 182.

Aifuwa also finished with the 18th double-double of her career and her ninth this season. Her stats line consisted of 11 points, 12 rebounds, seven blocks, and a steal.

Senior Jailin Cherry had some impressive play in the fourth quarter, ending up with a career-high in points with 19, despite having four fouls early in the second half. She collected 11 points in the second half and rounded out her stats line with five rebounds, two steals, and an assist.

Senior Khayla Pointer had several bright spots throughout the game finishing with 11 points, three rebounds, six assists, and three steals. She broke into the top-25 on the LSU all-time points list against the Florida Gators on Thursday and moved up one spot after today’s contest. She surpassed Patricia Woods (1,121; 1985-89) and now sits at No. 24 with 1,225 career points.

“South Carolina is a team that when you gameplan for them, what jumps out is their ability to rebound the basketball. They controlled the boards, which obviously controlled the tempo of the game and allowed them to get second and third opportunities. We couldn’t compete on the boards and I thought that was the difference in the game. Defensively, to hold South Carolina in the 60s, that was a decent defensive effort. I thought offensively, if we could have hit a couple more shots. We had some good looks. You know South Carolina and Aliyah Boston went to work a little bit there and I thought that gave them an inside presence. I thought Destanni Henderson played big today.”

On the importance of second-chance points…

“Well, it was 23-7. We had to play our smaller lineup against this team and 23 points to our seven is a huge deficit to overcome. Again, you’ve got a player like Aliyah Boston who can get you extra possessions, that helps tremendously. You saw where Saxton can come in and get some possessions there. It’s one thing to get offensive rebounds, it’s another to score it. I thought well they can get some boards, I think in our first game against them they got eight or nine points as far as second-chance points. Tonight, we did not do a great job in that area.”

On LSU building on its performance in the fourth quarter…

“I think so. I think we are able to build off of the fourth quarter. We are going to still look at how aggressively we played. When the ball goes in the hoop for us and we are scoring the basketball, it allows us to set up our press. When we are not scoring, we can’t set up our full-court pressure and that’s something that is a strength of ours. We were able to get to it a little more in the second half because we were able to score the ball a little bit better. Ball security, you know in the first half we were turning the ball over way too much. In the second half, we settled in and were taking care of the basketball a lot better. Our offensive production in the second half was a lot better. The first quarter was definitely a poor shooting quarter, as far as percentage. When you go 3-11 and you are turning the ball over, it’s going to make for a choppy first half for us. That’s where we have got to be better. It’s four quarters. It’s not for us to be focused for three or three and a half. You have got to be against a team like South Carolina and as we continue through the rest of the schedule, you can’t have off quarters. You have to be locked in every single quarter.”

The Tigers will remain on the road and head to Lexington, Kentucky, where they will take on the No. 20 Wildcats inside Memorial Coliseum. The matchup will take place on Thursday, February 18, and stream on SEC Network Plus at 6 p.m. CT. Fans are encouraged to tune into the LSU Sports Radio Network, broadcasting on 107.3 FM in Baton Rouge, with Voice of the Tigers Patrick Wright calling the action.