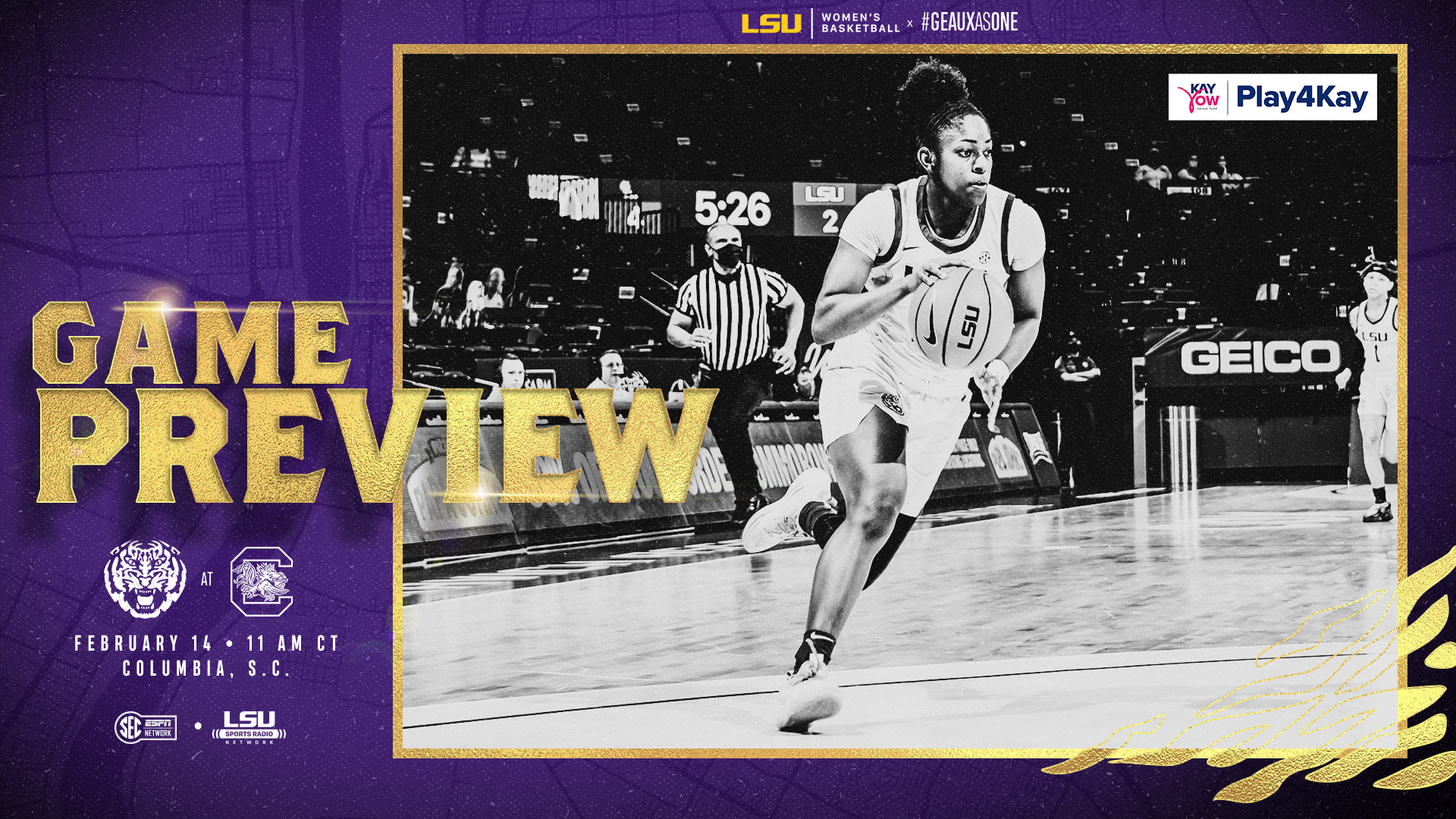 The Tigers will be wearing their pink road uniforms as they play in their second Play4Kay game in a week. Fans are encouraged to wear pink to honor cancer warriors at the annual Play4Kay game. Teams around the nation, in conjunction with the Kay Yow Cancer Fund, are raising awareness during the month of February to the needs for research and patient care for all cancers affecting women. For more information, go to kayyow.com.

Sunday’s game will be broadcast on the SEC Network with Eric Frede and Christy Thomaskutty calling the game. Fans can watch SEC Network through their local cable or satellite provider, on the internet at ESPN.com/watch or on the ESPN app. A link to the game is available on LSUsports.net.

LSU is 8-9 on the season and is in sixth place at 6-5 in the SEC following last Thursday’s 73-66 overtime loss against Florida. It was the fourth overtime game of the season for the Tigers, tying a program record for most overtime games in a season. Senior Khayla Pointer led three Tigers in double-figure scoring with a season-high 27 points, followed by redshirt senior Faustine Aifuwa with 16 and senior Awa Trasi with 10. Aifuwa posted her eighth double-double of the season with a team-leading 10 rebounds. Sophomore Tiara Young came off the bench with a solid stats line of nine points, five rebounds, four assists, two steals and no turnovers.

Aifuwa picked up another blocked shot on Thursday in her pursuit of second place on the LSU career blocked shots list. She is three blocked shots away (175) from moving into second place on the LSU career list to tie Julie Gross’ 178 (1978-80). Aifuwa is currently in 16th place on the career rebounds list with 712, the 16th LSU player to record over 700 career rebounds. She needs 48 points to become LSU’s 35th 1,000-career points scorer. Aifuwa continues to lead LSU with 8.8 rebounds per game and 24 blocked shots this season, and is the second-leading scorer on the team with 11.9 points per game. She recently took over the top spot on the team leaderboard for field goal shooting at 44.9 percent.

Pointer leads LSU with 16.5 points and 4.1 assists per game to go along with a team-high 41 steals. Pointer became the eighth Tiger in school history to dish out 400 career assists on Jan. 28 at Georgia. She currently sits at No. 25 on LSU’s career scoring list with 1,214 points.

Sophomore Tiara Young, a strong candidate for SEC Sixth Player of the Year honors, is providing a key spark off the bench averaging 9.6 points and 4.1 rebounds per game and is second in shooting at 44.2 percent from the field.

The Opponent – No. 1 South Carolina

South Carolina is 16-2 overall and 11-0 in SEC play this season. The Gamecocks are currently No. 1 in the Associated Press poll and No. 3 in the coaches poll. Four players are averaging double-figure scoring – Zia Cooke (15.8 points per game), Aliyah Boston (13.7 ppg), Destanni Henderson (11.6 ppg) and Victaria Sexton (10.0 ppg). Boston is the team’s leading rebounder with 11.5 boards per game and has blocked 54 shots. Henderson has a league-leading 101 assist this season.

This will be the 38th meeting between LSU and South Carolina and the second this season. The Gamecocks won the first meeting in Baton Rouge, 69-65, on January 24. The Tigers lead the series, 22-15 and are 10-7 when games are contested in Columbia.

Single game ticket prices are $7.00 for adults and $5.00 for youth ages 3-12. To order tickets for any of LSU’s last two women’s basketball home games, go to LSUtix.net. The next home game is scheduled for Sunday, February 21 against No. 18 Arkansas at 5 p.m. CT. It will be LSU’s Senior Tribute game.