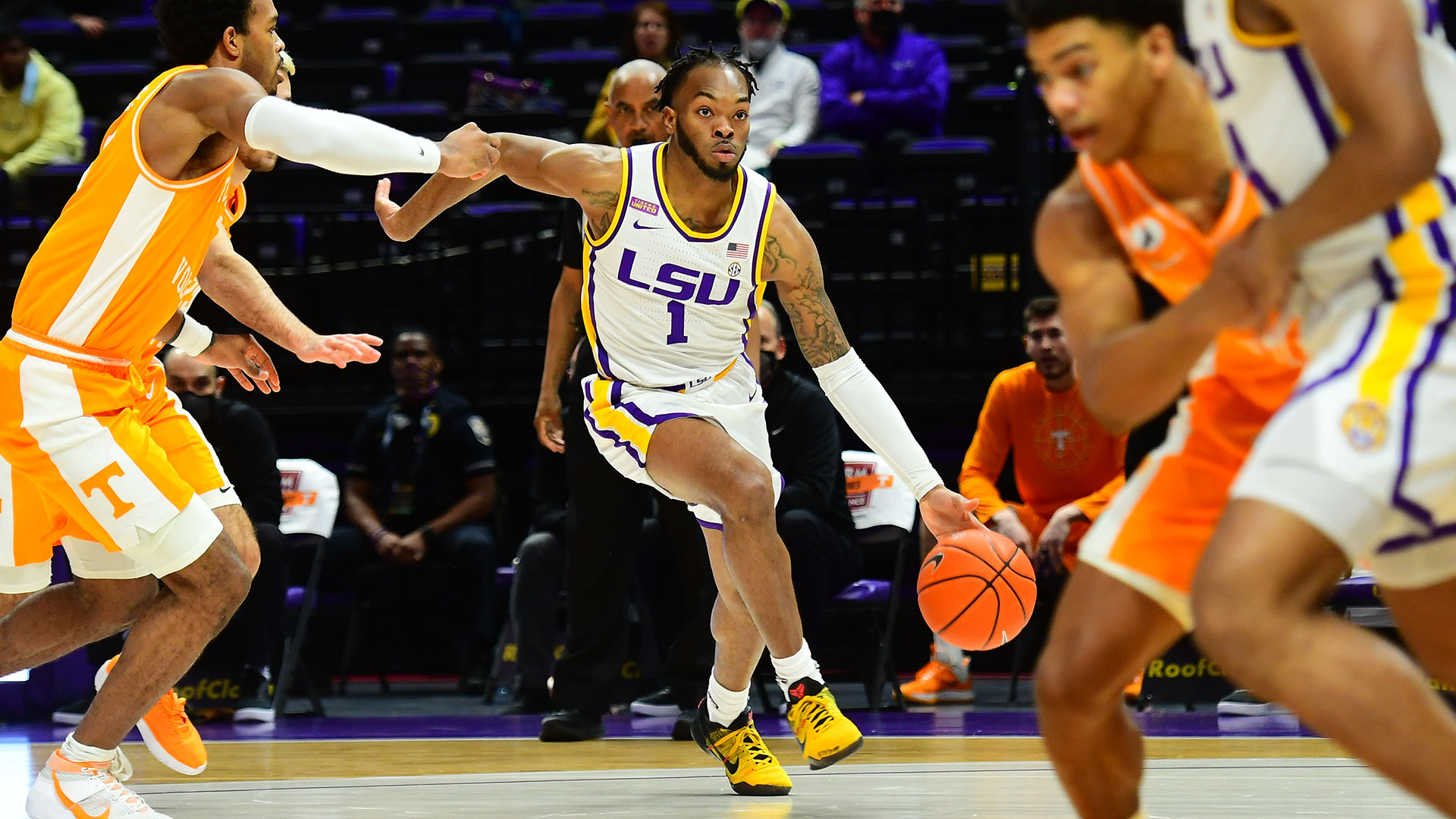 BATON ROUGE – The LSU Tigers knocked off nationally-ranked Tennessee for the third straight year Saturday afternoon at the Pete Maravich Assembly Center as LSU defeated the No. 16 Volunteers by a score of 78-65.

Javonte Smart for the third straight year scored at least 20 points on the Volunteers, hitting for 20 this year after 29 in 2019 and 21 in 2020. Smart hit 8-of-13 field goals, including a three and 3-of-3 at the line to go with five rebounds and two assists.

Cameron Thomas posted his fifth straight 20-point game with 25 on 6-of-16 shooting with two treys and 11-of-11 at the line to go with three rebounds and four assists. Darius Days, in his second game back, hit 6-of-10 shots including two treys to go with an assist, five rebounds and two steals.

The Vols were led by Jaden Springer with 21 points and seven assists, while Santiago Vescovi had 13 and Keon Johnson 12.

For the second straight game LSU’s offensive game was strong and Saturday the Tigers were engaged defensively, holding Tennessee to just 29 percent shooting in the first half and 35.5 percent for the game (22-of-62). Tennessee made eight threes and 13-of-17 at the line.

The Tigers quickly jumped out 10-5 on the Vols on a Hyatt three-pointer as Tennessee’s only lead came at 3-2 one minute in.  LSU would lead by as much as 12 in the first half, 28-16, with 4:47 to go but the Vols made their best run of the game, holding LSU to three points the rest of the way to cut the Tigers lead to five, 31-26, at intermission.

LSU is back at home next Saturday at 3 p.m. against Auburn but first is a midweek game that has not been announced by the league as of late afternoon Saturday, is expected to be announced at some point Coach Will Wade said in his postgame media zoom.

“Proud of our guys. I thought we played one of our better games, probably our best game to date. We can certainly play better and finish the game off better. I thought we got contributions from everyone. Javonte (Smart) was obviously tremendous. Cam (Thomas), phenomenal game. (Darius) Days did a great job. But, Aundre Hyatt, eight points, eight rebounds. Two big threes. He was huge. (Eric) Gaines and (Josh) LeBlanc did a phenomenal job defensively. I thought it was a total team effort. Probably our most complete game to date. It is something that we can continue to build off of. I thought that we got better from (Mississippi) State (LSU’s last opponent) to this game and now we have to build off this game and get better before we play midweek this week.”

On Javonte and why he is so effective vs. Tennessee …

“He is aggressive, he drives it. We were able to create some angles for him so he is able to drive it and get the ball downhill. He is a great player. He played great at Mississippi State. He has been one of, if not our most consistent guy all year. He is a great player. I think it is just habit that he has had big games against Tennessee. He has had huge games against a lot of opponents. He prepares well. He works extremely, extremely hard. When you do that, good things happen. Very, very proud of him and very, very pleased for him.”
—
Guard Cameron Thomas

On the importance of this win...
“We definitely talk about having caught one win, as it means going to the tournament. With these second wins, this is like a huge building booster for us to continue.”

On the play of Javonte Smart…
He’s (Javonte Smart) our point guard. We believe in him, and have our trust in him to lead us in the second half.”

On the play of Javonte Smart…
“Like you said we strike in half one, Javonte (Smart) went in and did his thing. He is one of our leaders, and he put us on his back. We rode his wave and capitalized on it in the second half, and kept going with solid defense. I don’t know anything about this team when he plays against them. He had a crazy game freshman year and last year. It’s something about Tennessee, he just loves to play against them, but I’m glad he’s on my team and my point guard.”
—
Head Coach Rick Barnes

On defensive effort against LSU…

“I think one-on-one defense, normally we do a good job of guarding sets. We did not do a good job of one-on-one defense today. We don’t ever want to leave someone on an island. We didn’t do a great job getting to our gaps to help. I felt like because our offense wasn’t what we wanted it to be that hurt our defense today as well.  They kept the pressure and made us feel we need to score every time we came down the court. Again, the one-on-one defense wasn’t very good. We fouled shooters a couple times where we didn’t need to do that. I didn’t think we listened today. The young guys are learning, obviously you guys know that. One game you play isn’t going to be the same as the next game or the one after that. We told them you’re not going to be able to drive and spin. Took us too along to adjust. We still need more from other players. We can’t just rely on Keon (Johnson) and Jaden (Springer) to guard their best players. We are not executing the way we need to execute.”

On trying to establish consistency with this team…

“That’s a tough question, it’s a good question. You know what, the young guys, you look at it. I mean you really look at it I would say the inconsistency is coming from our older players and that’s the disappointing part. We shouldn’t be putting the pressure on the younger guys. They are talented players, but we still need a balance. Some of those guys want to make big hustle plays, get those stick backs. More importantly we call a play and try to force things, as opposed to just going through the motions. You look at Jaden Springer’s line tonight, I thought he did a great job playing a lot of minutes. I thought we had some great looks from three, we take them even these nights when they’re not going in. When we go to a set of plays that’s inside out. It can’t just be through those same guys all the time. We were getting ourselves in too much trouble holding the ball all night. They were coming to double, we had to make skip passes, and we weren’t doing it quick enough. To get that consistency you’re talking about, it’s not going to come from one player, it’s got to come from a group of guys as a whole on both ends.”

LSU Basketball Back On The Home Court Friday Against UT Arlington

LSU Basketball Back On The Home Court Friday Against UT Arlington