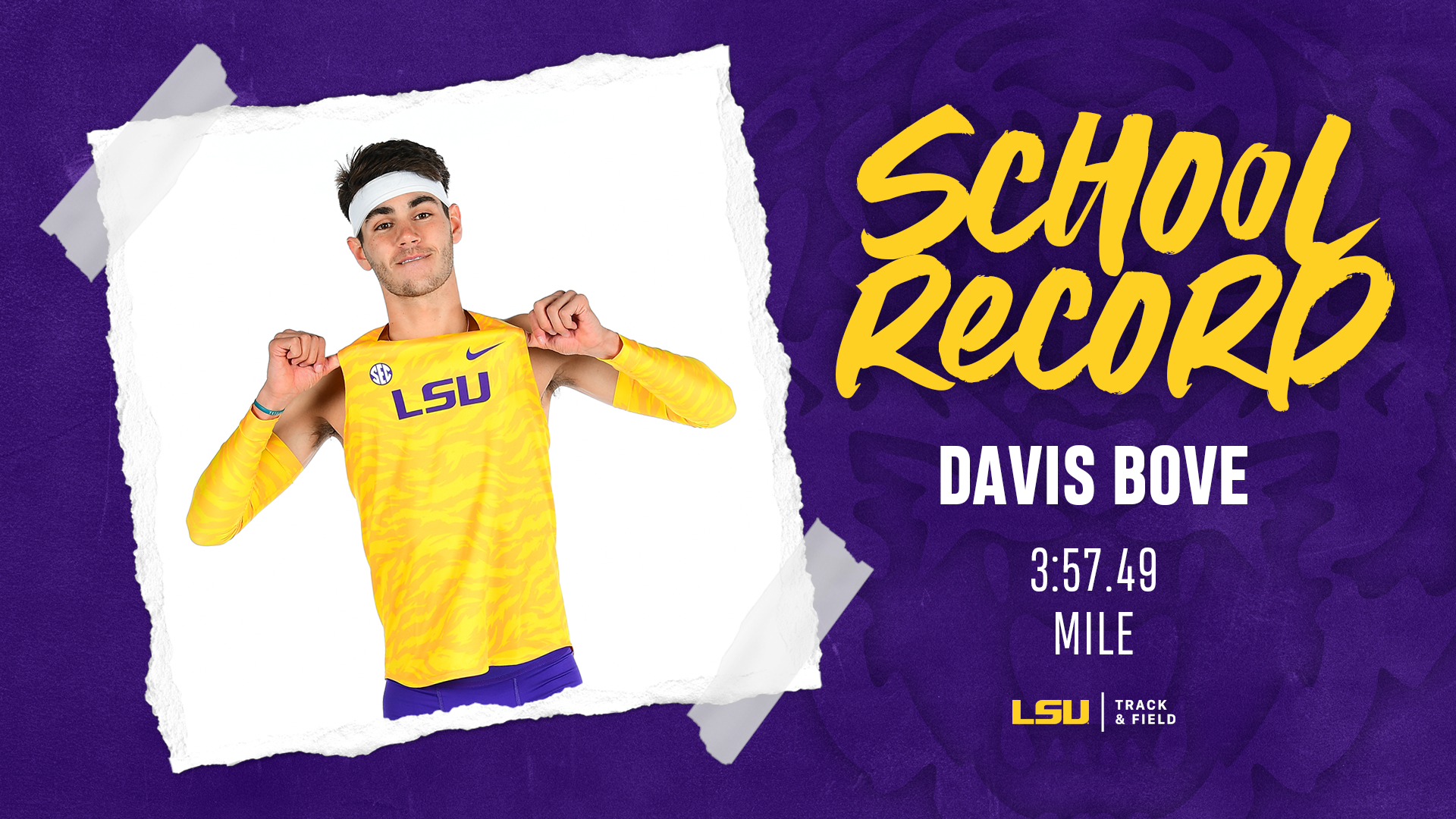 Nashville, Tenn. –  Davis Bove took down a 26-year old school record in the mile on Friday night at the Music City Challenge in Nashville with a time of 3:57.49. He broke Passmore Furusa’s previous school record of 3:58.77 that was set back in 1995.

Bove entered a loaded field at the Music City Challenge in the men’s mile on Friday night. Bove, a native of Franklin, Tenn., was running in his home state on the campus of Vanderbilt as he set the LSU school record. Bove, a sophomore, came to LSU with a personal best of 4:06.28 in the mile and has already lowered that by almost 10 seconds within his first two years in Baton Rouge.

SCHOOL RECORD@Dbove1017 goes 3:57.49 to crack the four minute barrier in the mile and take ?? at the Music City Challenge!

His time of 3:57.49 is the fastest ever in LSU history and ranks as the eighth fastest in the NCAA this season. Last year as a freshman, Bove became LSU’s first scorer in the mile run at the SEC Championships since 2010. Eric Coston also clocked a personal best in the mile on Friday night with a time 4:06.13 to place 12th.

HUGE PR for Jordan Nerdal in Nashville! He registers a weight throw 72′ 11.75″ (22.24m) to win gold with the NCAA No. 3 throw and third best in LSU history.#GeauxTigers pic.twitter.com/ByMj8zBy8M

LSU had strong showings in the long jump from Aliyah Whisby and JuVaughn Harrison. Whisby registered a personal best of 21′ 4.75″ (6.52 meters) on her sixth and final jump of the event to capture the silver medal. The mark ranks No. 3 in LSU history and is the fifth best in the NCAA this season. Harrison collected silver just like Whisby with a season best leap of 26′ 6.50″ (8.09 meters); the mark for Harrison is the second best in the NCAA this season.

.@jaay_jumps leaps to a season best of 26′ 6.50″ (8.09 meters) to claim silver at the Razorback Invitational! It’s the second best mark in the NCAA this season.

??? of the fifth best jump in the NCAA this season! @aliyyahhx pic.twitter.com/YuPALS0BqU

Damion Thomas (7.69) and Eric Edwards Jr. (7.71) both registered season bests in the finals of the 60 meter hurdles en route to second and third-place showings to round out LSU’s podium finishes at the meet on Friday. In the 3,000 meter run, freshman Ashley LaJocies set a big personal best with a time of 9:55.22 which is the eighth fastest time in LSU history, and Will Dart PR’d with a time of 8:35.85 on the men’s side. Kenny Odinet III PR’d in the men’s pole vault with a clearance of 16′ 10.75″ (5.15 meters) to take fifth.

LSU is back in action on Saturday at both the Tyson Invitational and Music City Challenge. A full competition guide can be viewed at lsusports.net.