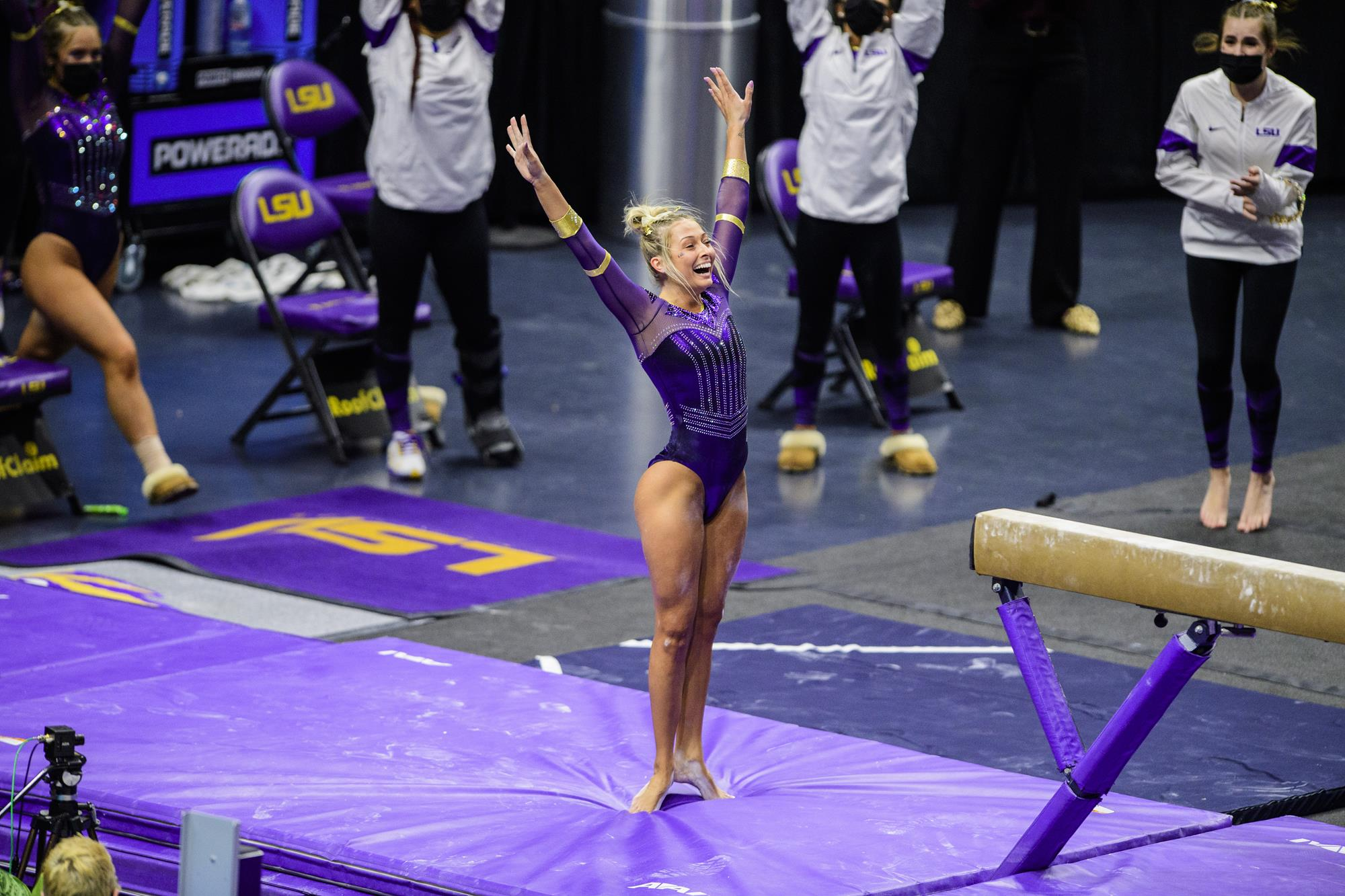 Undefeated and second-ranked in the country, the LSU gymnastics team knew their senior class would be the backbone of their squad heading into the 2021 season, and they’ve delivered some impressive performances through the first month.

It comes as no surprise, though. This was the expectation all along from the six Tigers who returned for their final year in purple and gold.

Before the season, the senior class met and talked about the legacy they wanted to leave behind and the goals they wanted to achieve. Even with a less than normal Maravich Center atmosphere and a long 308-day wait, that hasn’t stopped the seniors from capitalizing on every opportunity given so far.

“As a senior class, we’ve met and talked about what we want the team’s identity to be, the culture we’ve been brought up in, and the legacy we want to leave behind,” said senior Sarah Edwards prior to the opening meet. “Everybody’s on board and we all have the same end-goal in mind.”

Yes, it’s only been a four-meet sample, but the seniors are making good on the words spoken in that preseason meeting. The goals discussed, however, are still out there for the taking.

Opener Against The Hogs

Setting the tone is always important. It took until the final performance of the night, but the Tigers earned a hard-fought 196.550-196.350 win over No. 15 Arkansas in the opener.

Sophomore Kiya Johnson won the night, but it was also a strong start for the seniors.

In the first road trip of the season, Bridget Dean matched her season best with a 9.90 on bars and Durante closed the event with a 9.875. On vault, Edwards scored a 9.80.

After the halfway point, Reagan Campbell scored a 9.85 on floor and Desiderio, Durante and Campbell helped clinch the win on beam.

Sweep Against The Dawgs

Seniors Durante, Campbell and Edwards all earned victories on bars, beam and floor.

“I think the story of the night is what the senior class was able to do and the fight they brought,” said head coach Jay Clark following the meet. “The freshmen showed a lot of grit tonight as well in some tough places. The way we started and the way we finished shows what this team can do and the potential they have.”

Desiderio began the beam lineup with a 9.800, too, setting the tone for a big senior-to-senior start and finish with Campbell’s season-high 9.950 score.

Battle of the Tigers

LSU posted the third-highest score in the nation to date inside Auburn Arena on Friday. With Edwards out, the Tigers picked up the slack to remain unbeaten.

“Their confidence is growing and they know what it takes,” Clark said after the win. “We haven’t even put together a full meet yet, so the future is bright.”

The Tigers are now set to host No. 1 Florida on Friday night at the PMAC in a matchup between the top two teams in the country. With this year’s all-SEC schedule, the road only gets tougher with each week, and LSU’s senior leadership is going to be heavily dependent upon.

It will be a showdown between No. 1 vs. No. 2 Friday night inside the PMAC!

It’s the underclassmen that have set the tone for the Tigers in vault and bars, but it’s been the seniors that have carried them home on beam and floor. The back-end of each meet has been their moment to shine, to finish the job, when experience and leadership is needed the most.

The goal is to keep ascending, to keep improving, and to peak at the perfect time.

“There’s always room to move forward, do better,” said Campbell. “I think we’re definitely going to do that later on and hit the peak when we need to hit the peak.”