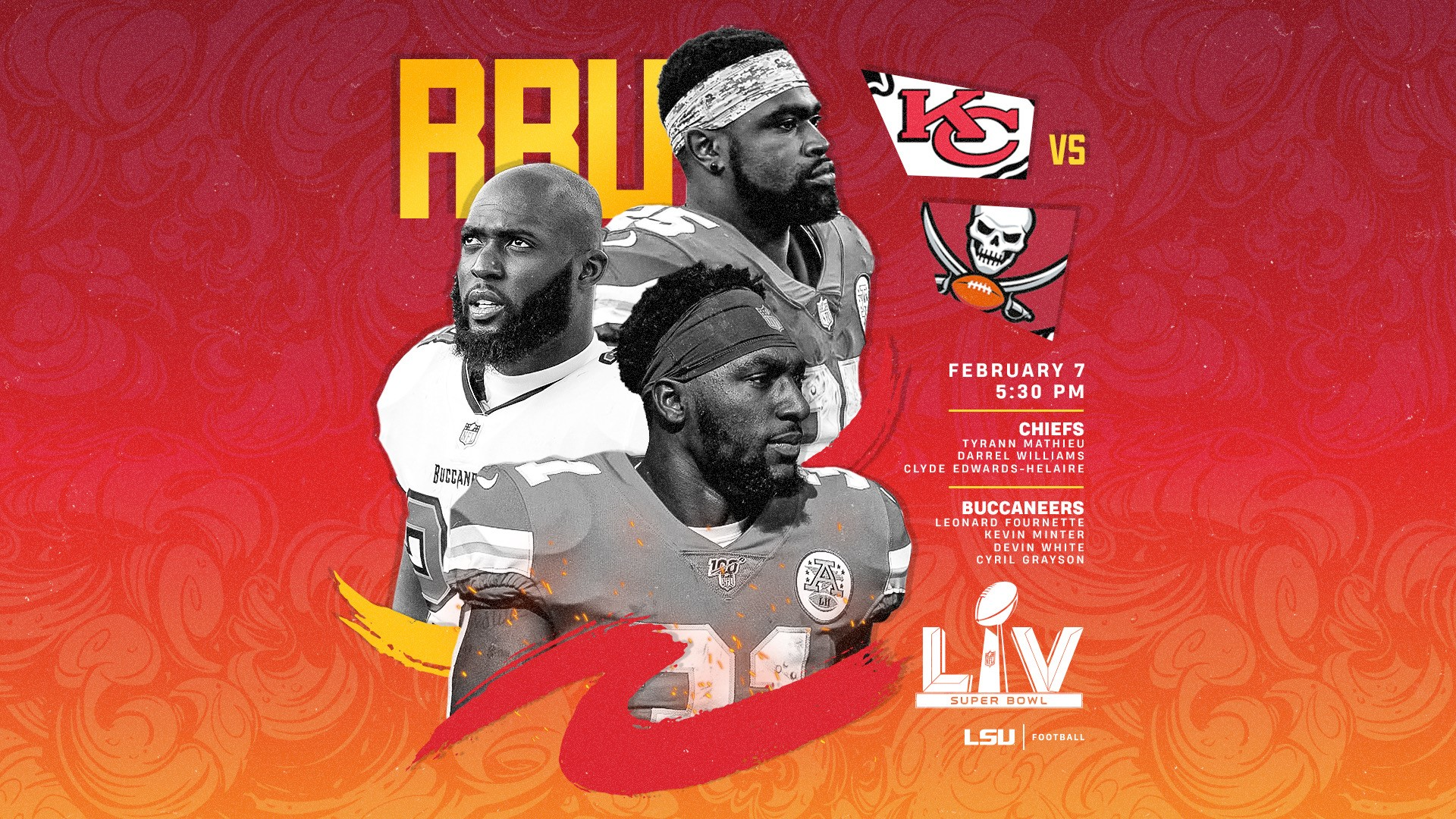 BATON ROUGE – Six former LSU players – the most of any team in college football – will be in action today when Super Bowl LV takes place in Tampa.

Today’s game features three Tigers on each team with LSU being represented by running backs Clyde Edwards-Helaire and Darrel Williams along with safety Tyrann Mathieu on the Chiefs and running back Leonard Fournette and linebackers Devin White and Kevin Minter on the Buccaneers.

It’s the 20th straight year LSU has a player in the Super Bowl, which ties with Georgia as the longest streak in the SEC.

With so many former Tigers playing prominent roles in today’s game, here’s a look back at some other notable Super Bowl performances through the year as well as a list of past Super Bowl superlatives by LSU Tigers:

Super Bowl IV: Chiefs 23, Vikings 7
Johnny Robinson and Remi Prudhomme each had takeaways in leading the Chiefs to a 23-7 win over Minnesota in Super Bowl IV. Robinson returned a fumble for 2-yard in the second quarter and then intercepted a pass in the fourth quarter. Prudhomme recovered a fumble in the second quarter at the Viking 19-yard line that led to a Chiefs touchdown and a 16-0 lead. Former Tiger Moonie Winston made the first of his four Super Bowl appearances in the game, recording four tackles and a sack for the Vikings.

Super Bowl XVI: 49ers 26, Bengals 21
Charles Alexander rushed for 17 yards on five carries and caught two passes for three yards in a 26-21 Bengals loss to the 49ers. Alexander’s 2-yard run on third-and-1 at the 49er 6-yard helped kept a Bengal TD drive alive in the fourth quarter. The Bengals scored on the next play to pull to within 20-14 but that was as close as they would get.

Super Bowl XXII: Giants 39, Broncos 20
Leonard Marshall sacked Denver quarterback John Elway twice, including one for an 11-yard loss in the third quarter to help the Giants to a 39-20 win over the Broncos.

Super Bowl XXV: Giants 20, Bills 19
Leonard Marshall had a sack for the Giants in New York’s 20-19 win over the Bills.

Super Bowl XXXVIII: Patriots 32, Panthers 29
Kevin Faulk rushed six times for 42 yards and caught four Tom Brady passes for 19 yards in helping the Patriots to their first Super Bowl victory with a 32-29 win over the Panthers. Faulk’s biggest play was a 23-yard run in the fourth quarter that put New England inside the Panther 10-yard line.

Super Bowl XXXIX: Patriots 24, Eagles 21
Kevin Faulk rushed for 38 yards and caught two passes for 27 yards as the Patriots won their second straight Super Bowl with a 24-21 victory over the Eagles. With the game tied at 14-14 in the fourth quarter, Faulk help set up what proved to be the winning points for the Patriots, as on consecutive plays,  he rushed for 8 and 12 yards and then caught a Tom Brady pass for 14 yards that got the ball to the Eagle 2-yard line. The Patriots took the lead for good at 21-14 on the next play. Defensively, Jarvis Green had five tackles for the Patriots as New England held the Eagles to just 45 rushing yards

Super Bowl XL: Steelers 21, Seahawks 10
Recent Pro Football Hall of Fame inductee Alan Faneca, the starter at left guard for Pittsburgh, helped pave the way for a Steeler offense that rushed for 181 yards and two TDs in their 21-10 win over the Seahawks.

Super Bowl XLI: Colts 29, Bears 17
Joseph Addai rushed 19 times for 77 yards and caught 10 passes for 66 yards in helping the Colts to a 29-17 win over the Bears. Addai’s 29 offensive touches are the most-ever for an LSU player in a Super Bowl. In addition, he holds the LSU record for most carries (19) and receptions (10) in a Super Bowl. Booger McFarland had two tackles and a tackle for loss as he won a Super Bowl for the second time.

Super Bowl XLII: Giants 17, Patriots 14
Corey Webster had two tackles in helping the Giants defense shutdown the Patriot offense in a 17-14 win.
Kevin Faulk caught seven passes for 52 yards and rushed once for seven yards, while Jarvis Green had a sack and Eric Alexander added two tackles in the loss.

Super Bowl XLIII: Steelers 27, Cardinals 23
Ryan Clark had five tackles as the Steelers won the Super Bowl for the second time in four years with a 27-23 win over Arizona.

Super Bowl XLIV: Saints 31, Colts 17
Joseph Addai had another big performance in a Super Bowl rushing for 77 yards and a TD to go along with seven receptions for 58 yards, but it wasn’t enough as the Saints won a Super Bowl for the first time in franchise history with a 31-17 victory. Addai’s 4-yard TD run put the Colts up 17-13 in the third quarter, but the Saints outscored the Colts 18-0 the rest of the way to earn the win. Devery Henderson had seven catches for 63 yards and Randall Gay added two tackles for the Saints.

Super Bowl XLIX: Patriots 28, Seahawks 24
After a scoreless first quarter, Brandon LaFell hauled in an 11-yard TD pass from Tom Brady at the 9:47 mark in the second quarter to give the Patriots a 7-0 lead over the Seahawks in Super Bowl XLIX. LaFell finished the day with four catches for 29 yards as the Patriots scored 14 points in the fourth quarter for a 28-24 comeback win.

Super Bowl LI: Patriots 38, Falcons 34 (OT)
Deion Jones set the record for most tackles in a Super Bowl by a former Tiger with nine, but it wasn’t enough as the Patriots rallied from a 28-3 third quarter deficit to beat Jones and the Falcons, 38-34 in overtime. Jones forced a fumble in the second quarter that eventually led to a touchdown and a 7-0 Atlanta lead. Barkevious Mingo had two tackles for the Patriots.

Super Bowl LII: Eagles 41, Patriots 33
Jalen Mills had nine tackles and broke up two passes as the Eagles beat the Patriots, 41-33, in Super Bowl LII. Mills’ nine tackles tied Deion Jones for the most by a former LSU player in a Super Bowl. Eagles punter Donnie Jones punted once for 41 yards as he joined an elite group of players that won a national title in college and a Super Bowl.

Super Bowl LIV: Chiefs 31, 49ers 20
Tyrann Mathieu played every defensive snap (58) and recorded six tackles to help lead the Chiefs to a 31-20 win over the 49ers in last year’s Super Bowl. After falling behind 20-10 late in the third quarter, Mathieu and the Chiefs defense forced the 49ers to punt twice, a turnover on downs and an interception on their final four possessions of the game to seal the win.

The list of Tigers who will take the field on Sunday for Super Bowl LV include three running backs in Leonard Fournette (Buccaneers), Clyde Edwards-Helaire (Chiefs) and Darrel Williams (Chiefs), two linebackers in Devin White (Buccaneers) and Kevin Minter (Buccaneers) and one defensive back in Tyrann Mathieu (Chiefs).