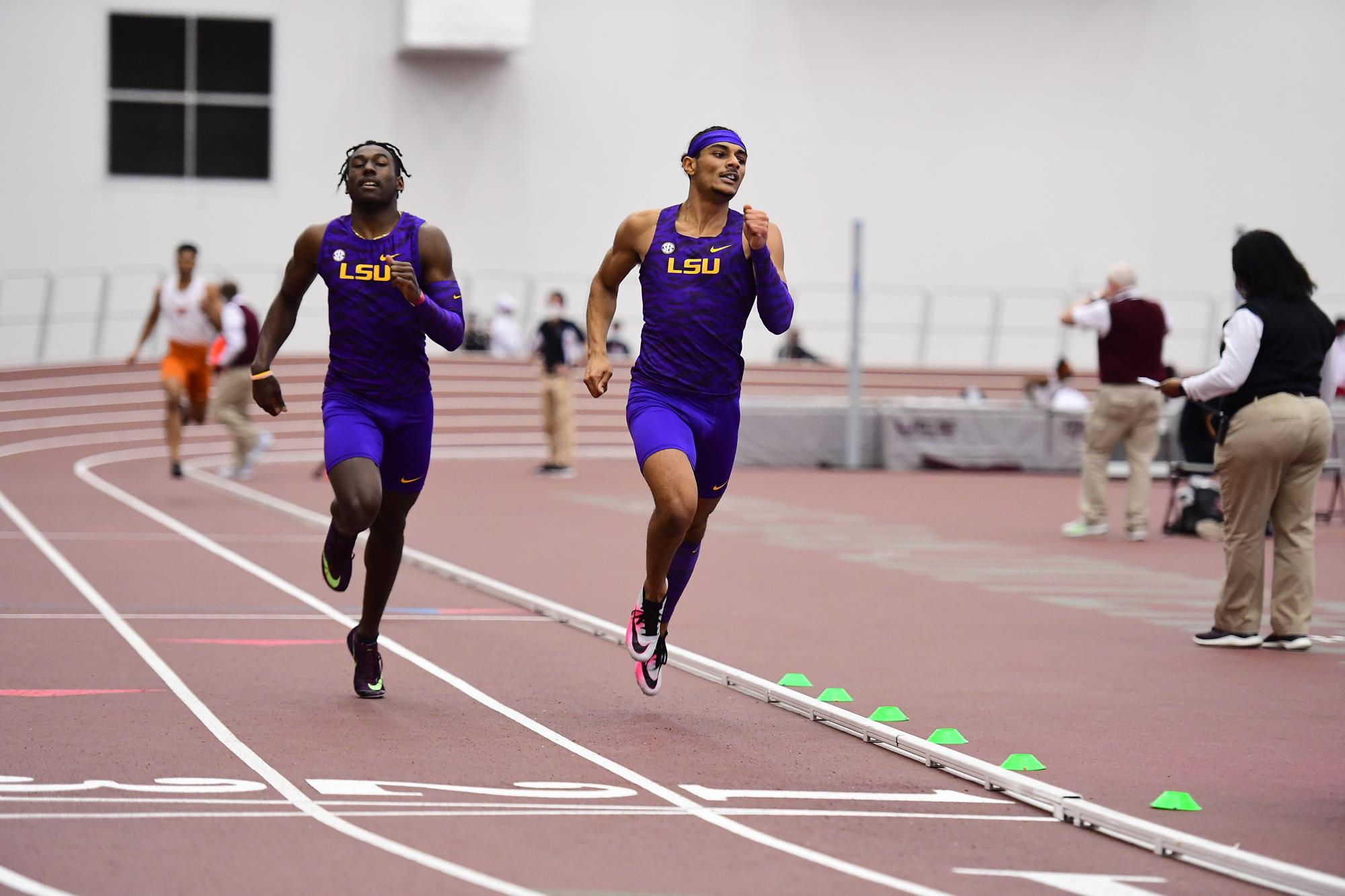 Baton Rouge, La. –  The LSU track and field program showed out on Saturday as they competed in the Charlie Thomas Invitational which took place at the Gilliam Indoor Stadium.  Four Tigers won titles against some of the top competition that the country has to offer.

The duo of Noah Williams and Sean ‘Squirrel’ Burrell took the top two spots in the 400 meter dash on Saturday afternoon.  Williams was the first one to finish, running a time of 45.47 to claim the gold medal.  He narrowly beat out LSU freshman Sean Burrell who finished with a time of 45.57 to finish in second.  Not only did the two runners set personal best marks, but they also registered top ten NCAA marks.  The time of 45.47 is the second fastest time in the NCAA and is the sixth best time in school history, while Burrell’s time of 45.57 is the fourth best mark in the NCAA and the seventh best time in the history of the program.  Their impressive performances were the first time each of the two competed in this event for LSU.

Men’s 400 Meters@noahwilliams24 and @SeanBurrell3 set PR’s as they finish in first and second place, respectively

Similarly to the men’s 400 meter dash, the Tigers took the top two spots in the women’s high jump.  Abigail O’Donoghue won the high jump for the fourth consecutive meet to start the season for LSU.  O’Donoghue cleared every height on her first attempt up until the final height, finishing with a clearance of 6’0″ (1.83 meters) to take the gold. Nyagoa Bayak placed second in the event as she cleared a season best height of 5′ 10.75″ (1.80 meters).

The 60 meter hurdles proved to be a successful event as the team earned four medals.  Damion Thomas put together one of the more impressive performances of the day, breaking the meet record in the 60 meter hurdles.  The three time All-American ran a time of 7.72 to win the gold medal, overtaking a meet record that has stood since 2011.  Thomas was closely followed by fellow teammate Eric Edwards Jr. as he crossed the finish line in second place with a time of 7.78.  On the women’s side, all three Tigers put together a top five finish.  The first one to cross the finish line for LSU was Milan Young who clocked a PR of 8.14 to earn the silver medal.  Young enters the NCAA top ten list as her time is the seventh fastest in the country.  Finishing in third place was Alia Armstrong, running a time of 8.21 which is a season best for the sophomore.  Leah Phillips also had a nice showing as she placed fifth with a personal record time of 8.36.

The weight throw group has been one of the strongest for the Tigers this season and Saturday showcased that.  Starting on the women’s side, Monique Hardy and Emma Robbins continued their successful run as they had stellar performances.  Monique Hardy, the freshman from Webster, NY, extended her winning streak to four consecutive meets to start her college career.  Hardy had her best showing yet as she won the weight throw with a personal best toss of 71′ 11.5 (21.93 meters).  That throw is the fourth best mark in the NCAA this season and the second best in school history.  Emma Robbins is another weight thrower who has been exceptional this season and Saturday was no different.  Robbins was awarded the bronze medal for her personal best throw of 66′ 5.25″ (20.25 meters) making it the third time she has earned a medal in as many meets.

The men’s weight throws also found a lot of success as all three athletes from LSU finished in the top five.  Jon Nerdal, a transfer from the university of Minnesota, won the event with a season best toss of 70′ 5.75″ (21.48 meters).  Jake Norris, who holds the fourth best weight throw in school history, placed second with a mark of 68′ 6.5″ (20.89 meters).  Finally, Luke Witte registered a personal best throw of 61′ 2.25″ (18.65 meters) to finish in fifth place.

Eric Coston and Davis Bove displayed their best readouts in the 800 meter run of their career.  Coston was the second athlete to finish, running a time of 1:50.71 while Bove crossed the finish line in third place with a time of 1:50.77.  Their times indicate a very impressive spread as they finished within .06 seconds of one another.

The Tigers will split up next weekend as some athletes will be competing in the Tyson Invitational in Fayetville, Ark., while others will be heading to Nashville, Tenn., to participate in the Music City Challenge.  The Tyson Invitational will run on Friday, February 12 and Saturday, February 13 while the Music City Challenge will take place on that Saturday.  The full indoor track and field schedule can be viewed at lsusports.net