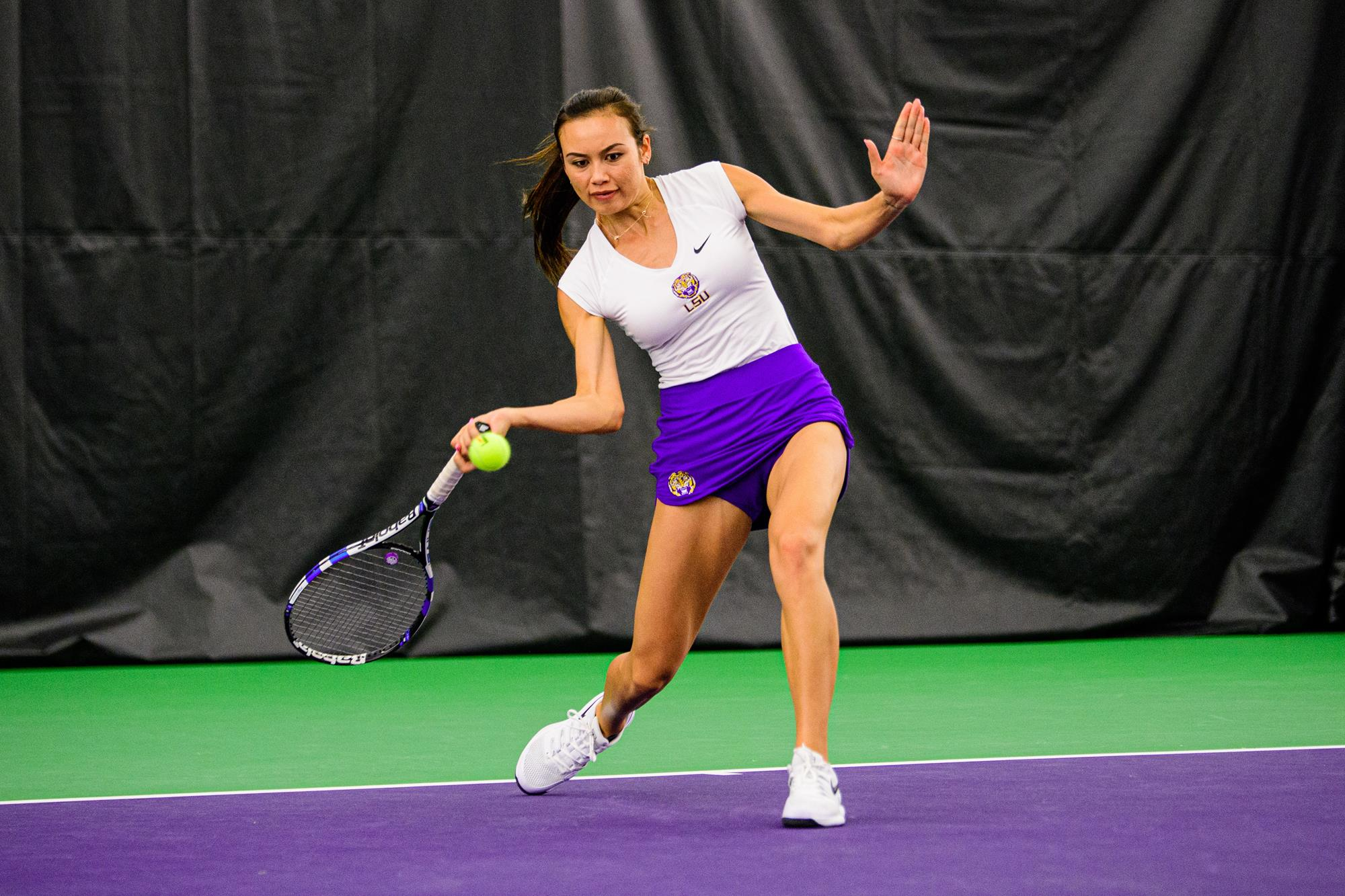 BATON ROUGE – The LSU women’s tennis team handed the visiting Tulane Green Waves their first loss of the season in an emphatic 7-0 sweep on Wednesday, February 3, at the LSU Tennis Complex.

“We’re happy with how we played,” co-head coach Michael Sell said. “We wanted to build from a successful weekend and we did that superbly tonight in what was a complete performance. Now we’ll look to take our confidence on the road for the first road trip of the season.”

Seniors Taylor Bridges and Paris Corley grabbed the first win of the evening in doubles, sweeping the duo of Cora Barber and Lahari Yelamanchili 6-0 at the No. 3 doubles.

The No.14-ranked doubles duo of senior Eden Richardson and sophomore Nina Geissler clinched the doubles point for LSU at the No. 1, controlling the match and holding off Adelaide Lavery and Mary Catherine Meredith by a score of 6-3.

The Tigers completed the sweep of doubles courts when sophomores Safiya Carrington and Maggie Cubitt were victorious at the No. 2, holding off Kristen Borland and Charlotte Russell in a 6-4 contest.

Richardson was the first off the singles court after taking the win at the No. 3 singles against Yelamanchili. Richardson claimed the first set in 6-2 fashion before blanking Yelamanchili in the second set 6-0 to earn her second singles win of the dual season and give LSU a 2-0 lead on the night.

The lead extended to 3-0 after No. 83 Carrington earned her first singles win of the dual season. Matched against Meredith at the No. 2, Carrington took the first set by a 6-3 margin before repeating the score in the second to claim victory.

The match was clinched at the No. 5, where Corley earned her second win of the dual season and tenth overall. Corley controlled the tempo over Barber, taking the first set 6-2 and repeating that score in the second set to give LSU a 4-0 lead.

At the No. 4, Cubitt grabbed her first singles win of the dual season with a straight set win over Borland. The first set began with both players trading games before Cubitt was able to pull ahead and win, 6-3. Cubitt took the lead in the second set and didn’t look back, blanking Borland 6-0 and extending LSU’s lead to 5-0.

No. 41 Bridges made it 6-0 on the night with a straight set win at the No. 1 over Lavery. Bridges was able to take the first set 6-3 before holding off a late charge in the second set from Lavery to win 6-4 and claim victory.

Geissler finished the night with a win at No. 6 over Russell. The first set was a back and forth contest, with Geissler able to pull ahead at the end of the it and claim the win, 7-5. The second set saw Geissler hold off her opponent and win by a 6-3 score to complete LSU’s perfect sweep over Tulane.

The Tigers will travel to Texas for a weekend road trip, beginning with taking on TCU at 2 p.m. CT on Friday, February 5 in Fort Worth, Texas.