Women’s Basketball Earns BASF Team of the Month For January 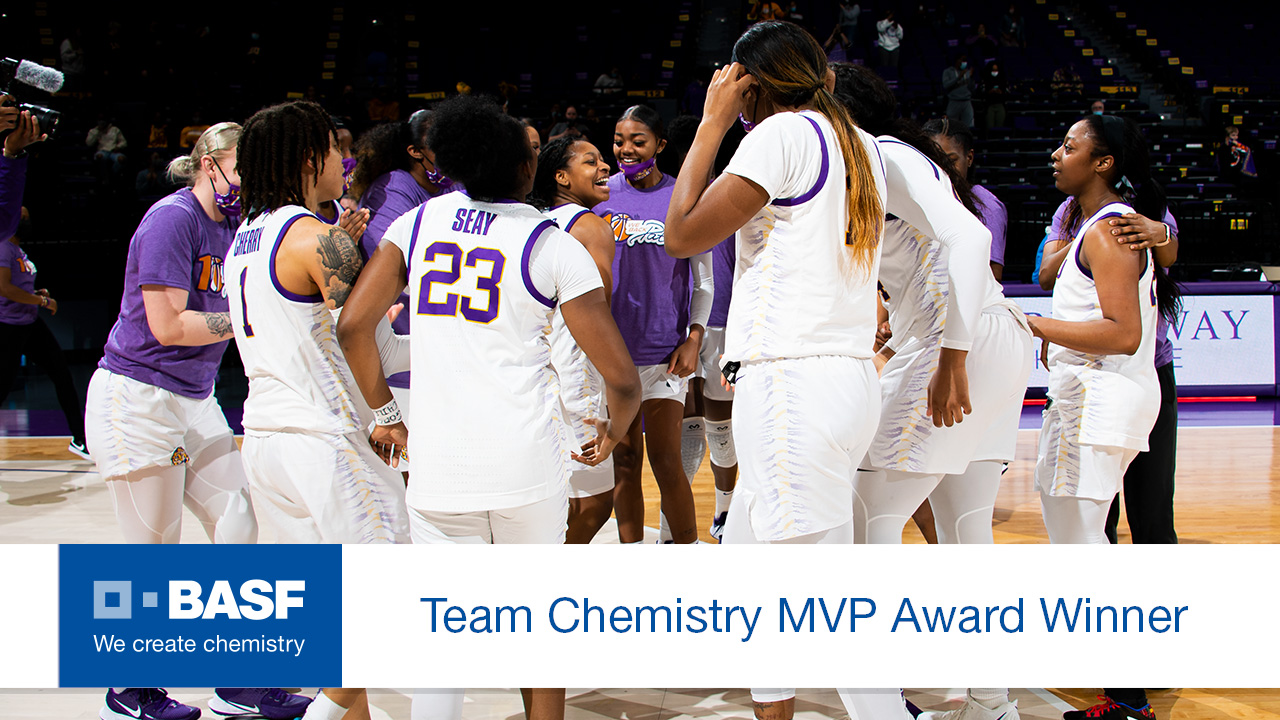 Baton Rouge, La. – The LSU women’s basketball team is the BASF Team of the Month for January after compiling a record of 5-3, including ranked wins over No. 7 Texas A&M and No. 22 Georgia.

The month of January started off with a 77-69 overtime victory on the road over Ole Miss on January 4th. Khayla Pointer notched a double-double, the fourth of her career and first of this season, with 18 points and 12 assists. The Tigers completed a 13-point comeback that started near the end of the third quarter to force overtime. Faustine Aifuwa and Karli Seay combined to score nine of LSU’s 14 points in the overtime period.

It was January 14th when the Tigers welcomed the No. 7 and undefeated Texas A&M Aggies to the PMAC. LSU boat raced the Aggies early on to the tune of a 26-7 scoring run that spanned from the first to second quarter and held off a furious comeback to pick up the win by a final score of 65-61. LSU’s defense held the Aggies to a season low total for first half scoring with 26 points. On the offensive side of the ball, sophomore Tiara Young put up a career high 20 points to lead the way. Aifuwa notched her sixth double-double of the season with 16 points and 11 boards.

It was another hot start, a 23-9 run, that propelled LSU to a road victory over Missouri on January 18th; the Tigers won by a final score of 66-64. Pointer scored 22 points to pace the offense and redshirt senior Aifuwa chipped in 12 points and eight boards in the contest.

The Tigers picked up their second ranked win of the month on January 28, a 60-52 road victory over No. 22 Georgia. Tiara Young provided more production off the bench with 17 points in 31 minutes of court time. Khayla Pointer became the eighth player in program history to register 400 career assists with her first dime of the game; she finished with a balanced scoresheet of six assist, six rebounds, five points, and four steals.

It was some PMAC magic for the Tigers on Sunday (January 31) as Karli Seay’s four-point play gave LSU the lead with 12 seconds remaining in the game against Ole Miss. Jailin Cherry dished the ball to the right wing where Seay hosted up a high-arcing three point attempt that banked in off the backboard and she was fouled. Seay nailed the ensuing free throw to give LSU a one point lead before Ole Miss made one of two free throws to send the game to overtime. The Tigers came out and scored the first six points of overtime and never looked back en route to a 75-66 triumph over the Rebels.