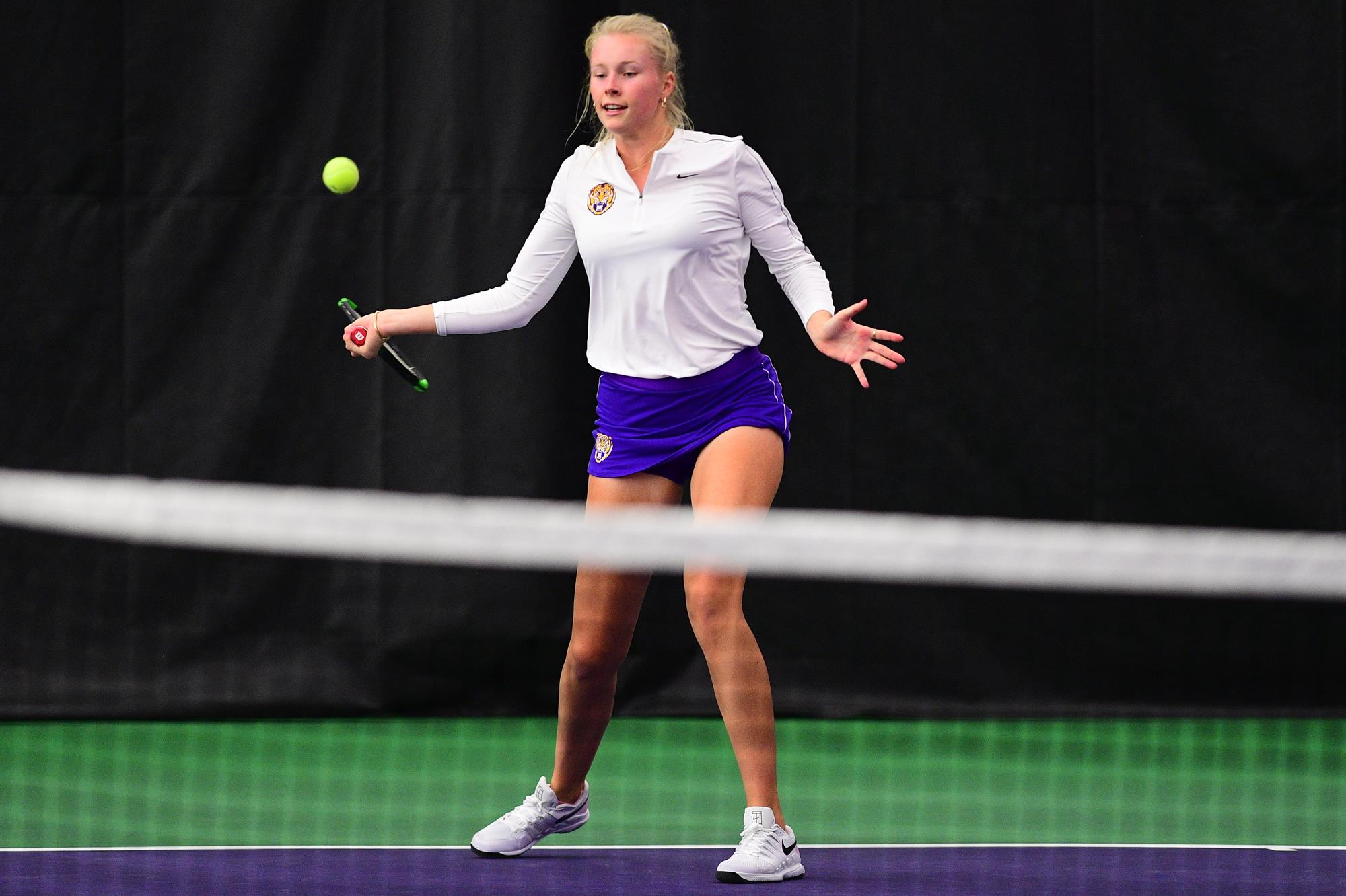 BATON ROUGE – The No. 24 LSU women’s tennis team opened the 2021 dual season with two 4-0 sweeps over Rice and then Southern on Sunday, January 31, at the LSU Tennis Complex.

“Awesome opening day for the Tigers,” co-head coach Michael Sell said. “We’re really encouraged by the way our team performed in their first match day of the year against two well coached teams. We got off to tremendous starts in doubles and carried it over to singles. Our team played physically and disciplined despite tough, windy conditions. We’ll look to continue to improve at practice and get ready for the next match against Tulane!”

Seniors Taylor Bridges and Paris Corley struck first for LSU, grabbing a win at the No. 3 over Anna Bowtell and Victoria Smirnova by a score of 6-1.

Moments later, the Tigers clinched the doubles point at the No. 2 when sophomores Safiya Carrington and Maggie Cubitt defeated the duo of Michaela Haet and Federica Trevisan in a 6-1 contest.

Corley was also the first off the courts in singles competition, defeating Anastasia Smirnova in straight sets, 6-1, 6-4, to give LSU a 2-0 lead in the match.

No. 41-ranked Bridges extended the Tigers’ lead to 3-0 with a win at the No. 1 against Victoria Smirnova. Smirnova jumped to an early lead and claimed the first set in a strong 6-1 fashion. Bridges responded by winning 12 of the next 13 games on her way to winning the second and third sets 6-0, 6-1 respectively.

Sophomore Nina Geissler clinched the first win of the season for LSU with a win at the No. 6 over Maria Budin. Geissler and Budin contested a back and forth first set, requiring a tiebreaker to decide it. Geissler outlasted Budin in the tiebreaker, 7-4, and carried momentum into the second set where she defeated her foe 6-4 to secure the win for herself and the team.

The English duo of senior Eden Richardson and junior Anna Loughlan were first off the doubles court as they came out victorious in a 6-1 contest over Takalani Molaoa and Kourtni Stewart at the No. 2 doubles.

LSU clinched the doubles point after Bridges and freshman Samantha Buyckx were victorious at the No. 3, defeating Sasha Taruberekera and Shaeda Nickle by a score of 6-1.

The Tigers completed the doubles sweep when Carrington and Cubitt came out on top over Tanaka Chakanyuka and Agyeponmaa Minta, 6-2, at the No. 1.

Buyckx earned the first singles win of her dual match career at the No. 5, defeating Taruberekera in a 6-0, 6-1 contest to give LSU a 2-0 lead on the night.

The lead was extended to 3-0 seconds later as Richardson grabbed her first singles win of the dual season with a 6-1, 6-0 straight set victory over Minta at the No. 2.

For the second time on the day, Geissler clinched the sweep for the Tigers with a singles win. At the No. 4, Geissler played a near perfect match as she completed the full 6-0, 6-0, sweep over Munyulwa to pick up her second singles win of the dual season.

The Tigers return to the LSU Tennis Complex for a match against Tulane at 5 p.m. CT on Wednesday, February 3.