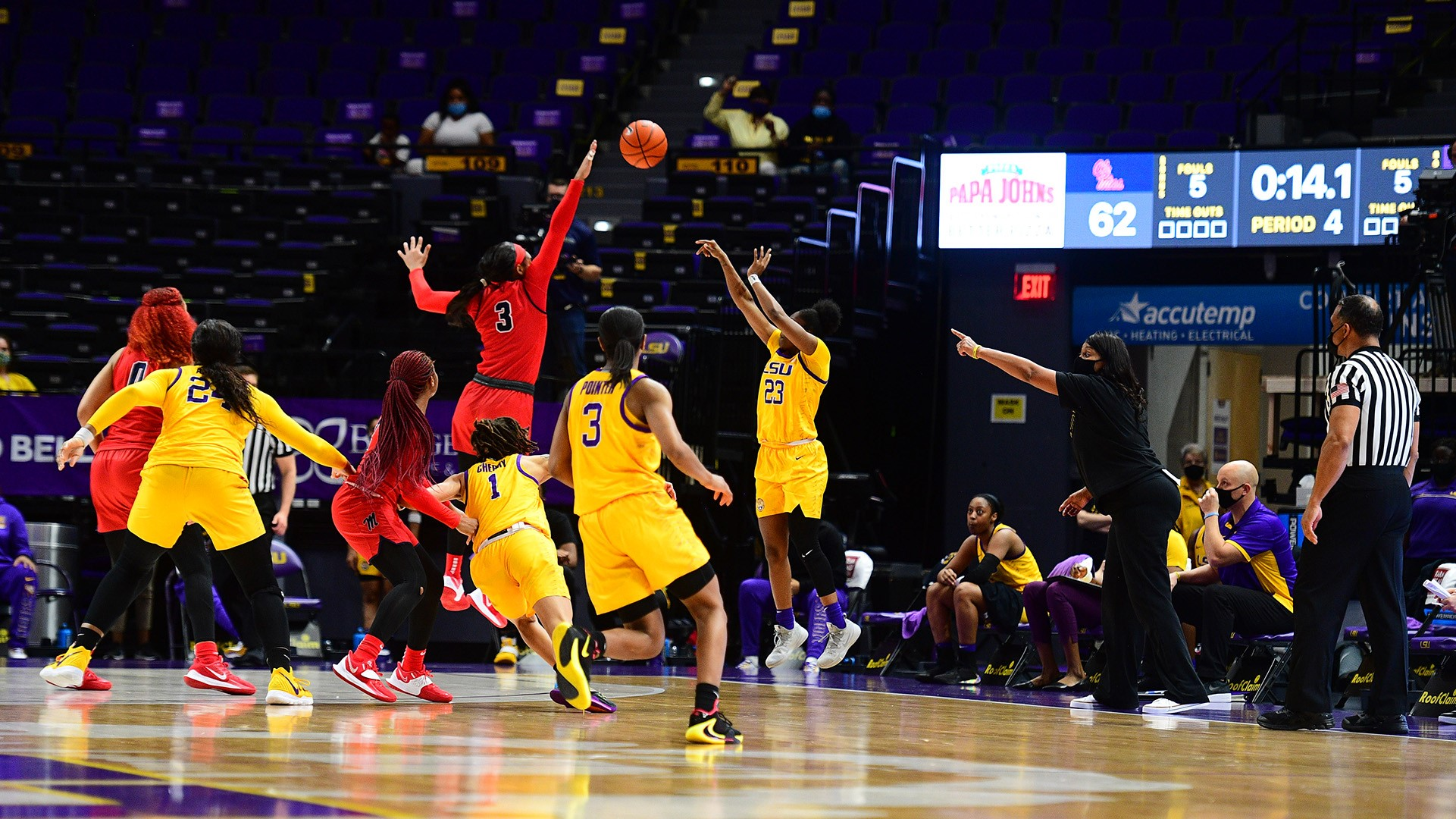 BATON ROUGE, La. — After a rare four-point play from senior Karli Seay towards the end of regulation and a 12-3 dominance in the overtime period, the LSU women’s basketball team completed the 75-66 comeback for the victory over Ole Miss Sunday afternoon inside the Pete Maravich Assembly Center. It was the 950th win in program history.

As the seconds waned in the fourth quarter, Seay hit a three-pointer and was fouled in the process. She would complete the four-point play giving the Tigers a brief lead, 63-62 with 12 seconds left, before Ole Miss sent the game to overtime, knocking down a free throw with 1.3 seconds left in regulation.

Similar to the first meeting between both of these teams, LSU took advantage of numbers down the stretch with three Rebels fouling out. Six different Tigers scored in the extra period to seal the win.

Redshirt senior Faustine Aifuwa had a productive afternoon on the glass, grabbing 16 total rebounds, 10 of those coming on the defensive side of the ball. She filled out the rest of stats line with 17 points, one assist, and one block. With her performance, she notched another double-double, her sixth of the season and the 16th of her career. Aifuwa is four blocks away from tying former Tiger Julie Gross (178; 1978-80). The 16 rebounds tied her single-game career high.

Senior Khayla Pointer started out slow, but showed some toughness down the stretch, bringing the Tigers within one with 29 seconds left in the fourth quarter. Her stats line consisted of 25 points, matching her season-high, four steals, two assists, and two rebounds.

Even without late-game heroics, Seay had a strong performance collecting 13 points, four rebounds, three steals, and an assist.

On the win being a team effort…

“It’s a group effort. I think that was awesome. You know you can’t script it with what it means for our bench, to give as much as they are. They see the game evolve through their lens and see what we can do to pick a team apart. To hear the comments that were being made, that was an experience to hear the voices. Domonique Davis having the lens of being a point guard, Jailin Cherry saying ‘You have to force Reid left’, or ‘You have to force Nesbitt to go to her left because that’s her weakness.’ It gave us opportunities to generate turnovers that went in our favor and allowed us to score the ball in the second half.”

On the last play…

“That is the irony of it. We went into the timeout talking about getting a quick two. They double-teamed. We knew we were expecting Khayla Pointer to get double-teamed. With that double-team, Karli is wide open standing on the three-point line and the kid runs her down. You just kind of go ‘that wasn’t a part of it, but we’ll take it’.”

On LSU playing well in overtime…

“They know it’s their second chance to truly be able to put the engine in check and be able to bring their best game. I’ll tell you what, we can’t keep going like this. We need to be able to get out to an early start and be able to finish them early.”

The Tigers will go to Bryan-College Station on Thursday, February 4 to take on the No. 8-ranked Texas A&M Aggies for the return trip. The matchup will be televised on the SEC Network at 8 p.m. CT. As always, you can listen to the Voice of the Tigers, Patrick Wright, broadcasting on 107.3 FM in Baton Rouge and the LSU Sports Radio Network on LSUsports.net.