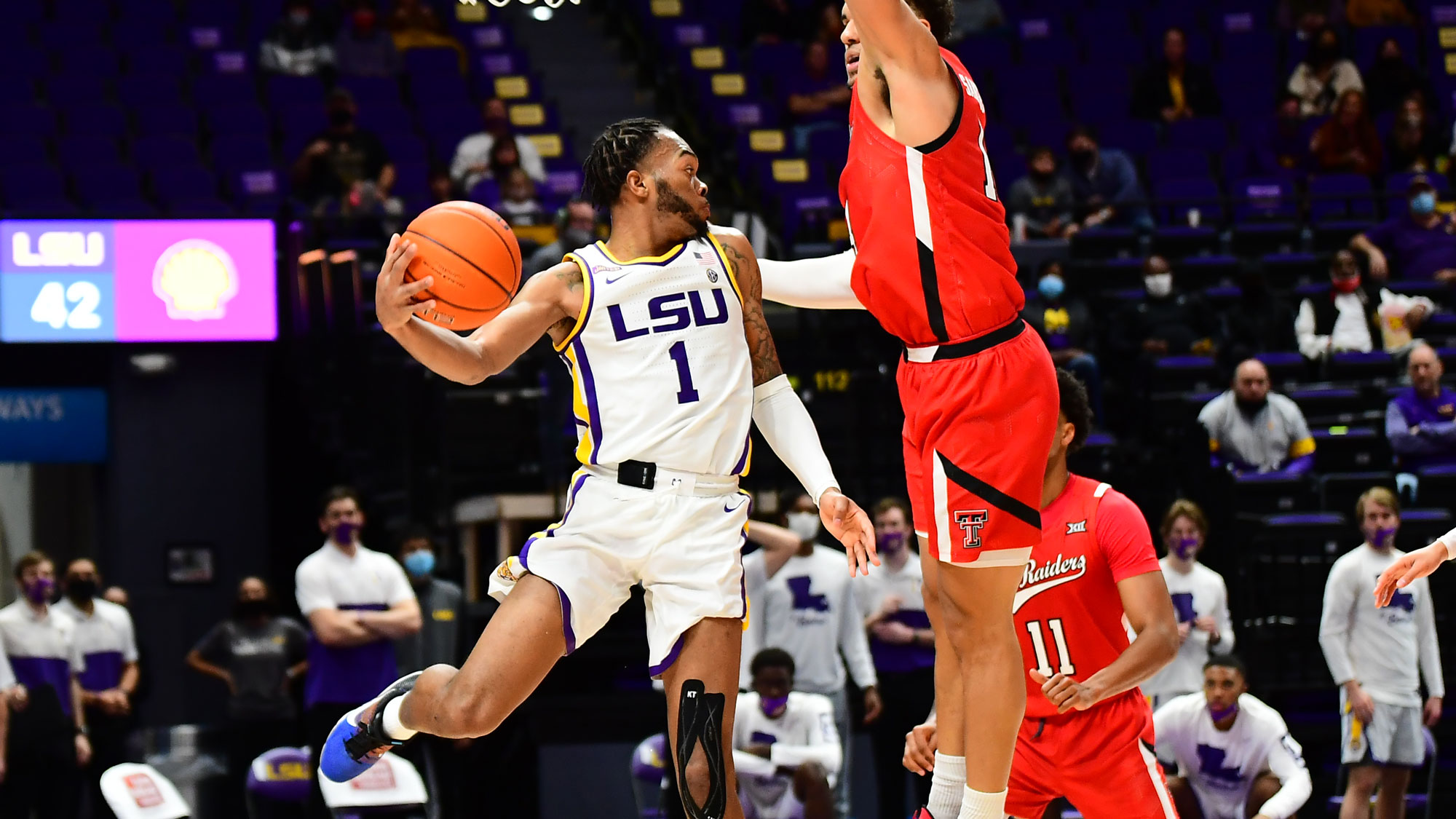 BATON ROUGE – The No. 10 Texas Tech Red Raiders scored the final 12 points of the game in the final 59.6 seconds to escape from the Pete Maravich Assembly Center with a 76-71 win over the LSU Tigers in the SEC/Big 12 Challenge game on Saturday.

Texas Tech is now 12-5 on the season while LSU falls to 11-5 heading back to conference play on Wednesday at 6 p.m. against Alabama at Coleman Coliseum in Tuscaloosa.

The effort negated a combined 54-point effort by junior Javonte Smart and freshman Cameron Thomas. Smart equaled his career high against Tennessee in February 2019 with 29 points against Texas Tech, hitting 12-of-18 field goals, including 4-of-7 treys and a free throw. Thomas posted 25 points on 6-of-20 shooting with three treys and 10-of-11 free throws.

Darius Days who suffered a left leg injury, was heading toward another double double with 11 points and nine rebounds when he got tangled up under the basket in the second half and had to be helped off the court. Coach Will Wade in his post-game presser said he could be out for possibly a couple of weeks.

But then things turned toward Texas Tech. Mac McClung hit a three off a break to make it 71-67. After a timeout by Tech, LSU brought the ball down and Texas Tech elected to foul once the ball ended up in Josh LeBlanc’s hands. He missed the front end of a one-and-one and back came the Red Raiders.

Chibuzo Agbo missed a jumper but after a wild scramble, McClung found himself with the ball in the corner and drained a three to cut it to 71-70 with 31 seconds left.

LSU could not get the ball inbounds and was forced to burn its final timeout and, on the ensuing throw in, LSU turned it over and Terrence Shannon Jr had the ball in the paint with the steal and scored to give Texas Tech a 72-71 lead with 23 seconds left.

LSU would miss a two-point shot on its next possession and was forced to foul Shannon who made both free throws to make the Tech lead, 74-71 with 16 seconds left.

The Tigers tried to get a good luck, but Thomas missed a long three in the final seconds and Shannon added two more free throws for the final margin.

Shannon finished with 23 points on 6-of-13 shooting with two treys and 9-of-10 at the line to go with 10 boards, while McClung finished with 22 points (7-15 shooting, 3 treys, 5-of-6 FTs). Marcus Santos-Silva had 12 rebounds, including seven offensive boards. Kevin McCullar added 10 points.

Overall, LSU was playing one of its better overall games, getting several first half steals that helped with a 9-0 run that gave LSU a 15-8 advantage in the first 10 minutes. That lead held and expanded to eight with 5:13 to play when Days hit a three-pointer that made it 26-18. LSU led 33-26 with 2:24 to play, but Texas Tech got the next six points to close it to 33-32 in favor of the Tigers at intermission.