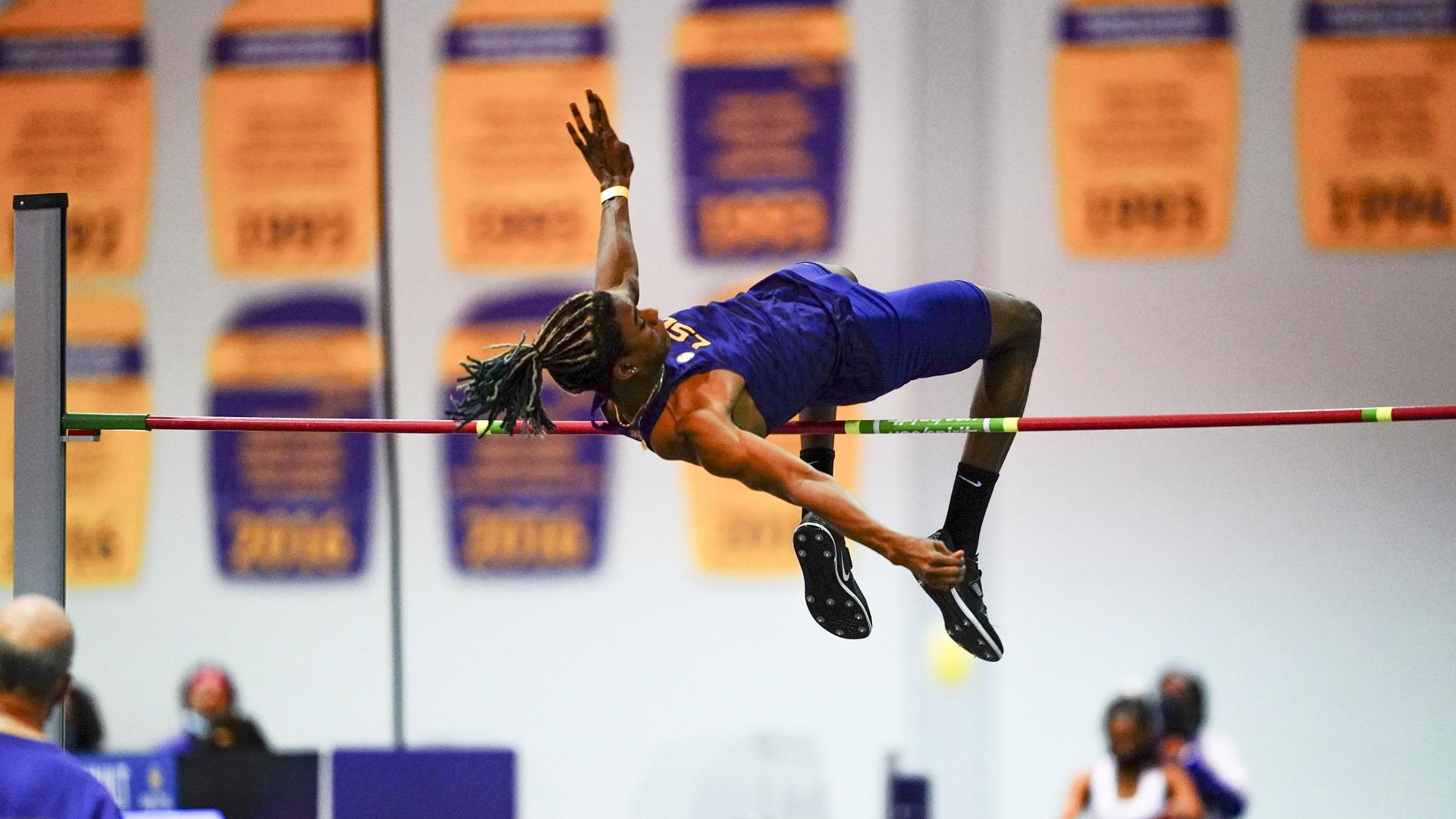 Baton Rouge, La. –  The LSU track and field team had a strong showing on Friday afternoon as they hosted the Louisiana Invitational on Friday at the Carl Maddox Fieldhouse.  Eleven Tigers came away with event titles, and six NCAA top 10 marks were registered by LSU.

“It was a good, solid meet for us today,” head coach Dennis Shaver said. “I felt like we got a lot accomplished. JuVaughn was superb in the high jump and then Aliyah (Whisby) and Sean (Dixon-Bodie) really had quality performances in their LSU debuts.”

JuVaughn Harrison contributed another winning performance on the season as he won the gold medal in the high jump with a clearance of 7′ 5.75″ (2.28 meters).  The two-time national champion’s impressive performance matches his PR, ranks as the top mark in the NCAA this season, and is tied for third place in the world.  He also holds the second-best leap (26′ 2.25″/7.98 meters) in the long jump event in the NCAA.

The weight throw group had a stellar day as a whole with four of the five throwers registering personal bests. Monique Hardy won her third straight event title in the weight throw when she registered a personal best mark of 69′ 7″ (21.21 meters) in her third collegiate meet; sophomore Emma Robbins PR’d for the second straight week and took silver with a mark of 66′ 1″ (20.14 meters). The throws rank as the second and third best in LSU history. On the men’s side, senior Jake Norris collected the best throw of his career with a toss of 71′ 11″ (21.92 meters); it ranks No. 4 in the LSU record book and No. 6 in the NCAA. Jon Nerdal (70′ 1.50″/season best) and Luke Witte (58′ 8″) finished in second and third, respectively.

It was all LSU in the 60 meter hurdles with the Tigers sweeping the top two spots in both the women’s and men’s races. Milan Young won with a time of 8.18, which was one-hundredth of a second off of her personal best, and Alia Armstrong finished second with a time of 8.32. On the men’s side, Damion Thomas (7.84) and Eric Edwards Jr. (7.94) cruised to a one-two finish.

A pair of LSU jumpers made impressive debuts for the Tigers. Aliyah Whisby leaped out to a personal best of 21′ 0.50″ (6.41 meters) on her second jump of the day to win the event. It’s the eighth best mark in LSU history and ranks No. 6 on the NCAA list. In the men’s triple jump, freshman Sean Dixon-Bodie leaped out to a big personal best of 53′ 7″ (16.33 meters) to win his collegiate debut. Dixon-Bodie’s jump is the top in the nation by a freshman and ranks No. 3 in the NCAA overall. Kyndal McKnight won her second triple jump event title of the season with a mark of 41′ 10″ (12.75 meters).

The Tigers will travel to Bryan-College Station, Texas to compete in the Charlie Thomas Invitational on Saturday, February 6.  The full indoor track and field schedule can be viewed at lsusports.net