2021 Season Opener is Three Weeks Away 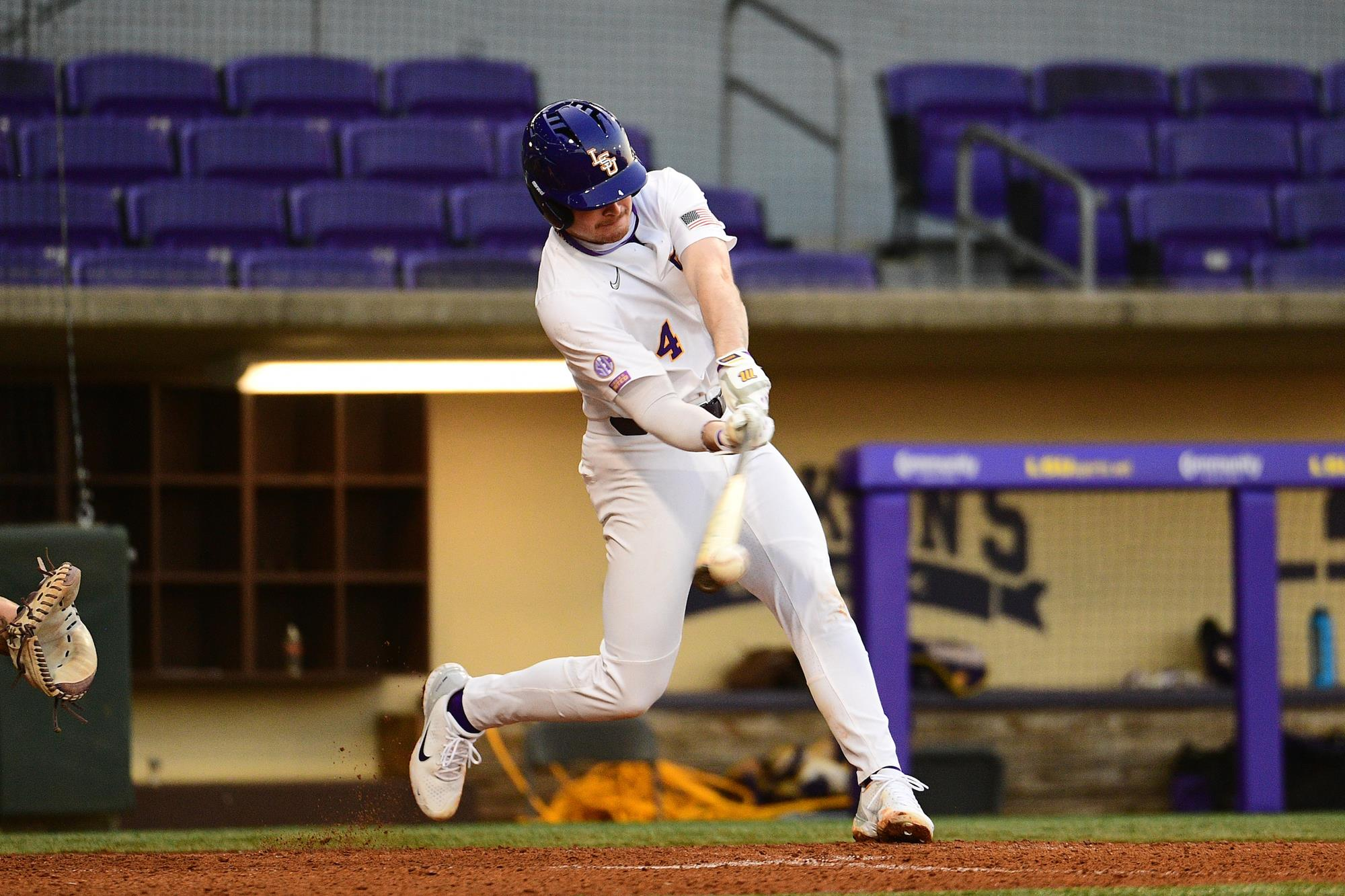 LSU, ranked No. 7 in the Collegiate Baseball newspaper preseason poll, opens the season at 7 p.m. CT on Friday, February 19, when the Tigers play host to Air Force in Alex Box Stadium, Skip Bertman Field. The Tigers have a 38-man roster that includes a recruiting class ranked No. 2 in the country by Baseball America. The Tigers also return 10 position players with starting experience and 10 pitchers who recorded innings last season.

LSU coach Paul Mainieri, who led the Tigers to the 2009 College World Series title, enters his 15th season in Baton Rouge eager for the challenges the 2021 season will present. Mainieri has directed LSU to five CWS appearances and nine NCAA Tournament National Seeds over the past 13 full seasons, and the Tigers have won four SEC regular-season championships and six conference tournament titles in that span.

The 2021 pitching staff is led by junior right-hander Jaden Hill, who is projected as the Tigers’ No. 1 starter; and senior right-hander Devin Fontenot, who is expected to work as the LSU closer. Both Hill and Fontenot earned 2020 All-America honors following the pandemic-shortened season.

“Today’s an exciting day, and I’m thrilled about the way out team is looking thus far,” Mainieri said. “We have a veteran pitching staff with Jaden Hill, Landon Marceaux and AJ Labas forming an outstanding starting rotation, and then we have many experienced guys coming out of the bullpen that have done a tremendous job for us over the years.”

“Position player-wise, we’re probably as young as our pitchers are veteran,” said Mainieri, who is in his 39th season as a collegiate head coach and ranks No. 1 on the NCAA Division I wins list for active coaches with 1,467 victories. “But that’s not scaring me at all, because we have a very talented group of players. As the season goes on, I believe they’re going to continue to get better and better.”

“It’s good to be with everybody, today’s an exciting day, to say the least. It’s a beautiful day. … We’re going to have a beautiful to get everything done that we want to get done. We’re going to simulate February 19th as best we can with our pregame batting practice, pregame infield, scrimmage game—we’ve got all three flags up behind center field. The players will be in game uniforms for the first time. We’ll have umpires, the field will be lined like it would be on game day. Hopefully the guys will respond well and be excited about being out there and it’ll take a little bit of the nerves away from what they normally would feel on Opening Day, which is February 19th against the Air Force Academy. So, we’re excited.

“I’m thrilled about the way our team is looking thus far. It’s been well chronicled; we have a very veteran pitching staff. We lost Eric Walker and Cole Henry from last year’s team, but I believe that Jaden Hill has the capability of stepping in and picking up for Cole Henry as a big-time starting pitcher. I think we’re going to see him continue to improve as the season goes on. Obviously, Landon Marceaux and AJ Labas give us the veteran rotation and then we’ve got so many guys coming out of the bullpen that have had experience with us and have done a tremendous job. When you add that to some of the young freshman pitchers, the pitching staff has so much to be excited about.

“Position player wise, we’re probably as young as our pitchers are veteran but that’s not scaring me at all. I think we have a very talented group of position players and I’m excited about them. As the season goes on, they’ll get experience. I just believe they’re going to continue to get better and better. I think our team is primed to be one of the top teams in the SEC.

“The SEC is going to be as tough as it’s ever been, if not tougher because so many schools like us have had players return or not get drafted because of the shortened draft. So, the talent level in the SEC is going to be extreme. I’m not sure how many first-round pitchers are going to come out of the SEC, but I wouldn’t be surprised if a third of the first round is SEC pitchers or position players. It’s going to be an exciting season. Today is three weeks from Opening Day and we’ve got three weeks to get everything tightened up a bit and start the non-conference segment of our schedule.”

“Well, when Jaden was in high school in Arkansas, he played third base a lot and pitched. He told me he hardly ever threw a bullpen session when he was in high school. All of a sudden, he comes to college and he wants to focus on pitching. We all felt that was the right thing to do and of course (LSU pitching coach) Alan Dunn has his throwing program that he develops the pitchers with, and it’s been extremely successful through the years. We’ve hardly ever really had injuries throughout the years with the way that Alan has handled those guys. But for Jaden, it was a little bit much for what he was used to in high school, so the adjustment was pretty dramatic for him.

“He started the first two weekends his freshman year and then went down with a sore arm. There was nothing structurally wrong with his arm. We did multiple MRIs, etc., and it was just a matter of the muscles getting used to the quantity of throwing for a college pitcher. Last year, it was a very concerted effort on Alan and I, with Cory Couture, our trainer, to bring him along slowly in the spring so we moved him into the bullpen. We managed very carefully how many pitches he threw, how many innings he threw, with the idea that we would stretch him out as the year went on. The intention was to start him out in the bullpen and ultimately, he might move into the rotation. Of course, the season got ended before we could realize that expectation.

“This year, there’s no real holding him back. He’s going to start the season in the rotation. We may hold him back a little more than what Marceaux and Labas do because those guys are such veterans and have done it so much. Whereas opening weekend, for example, say Marceaux and Labas went five innings because they pitched effectively enough, we may not have Hill go quite that long and just constantly be building it up. I really want the kid to feel confident, not only in his ability to succeed and dominate but also to feel that he’s healthy. Rather than push him too much early, we might take it a little bit slower than we do with the other guys.

“I think he’s going to be fine. He’s probably the best athlete on our team and there’s no reason why he shouldn’t have the endurance to be able to stretch it out but we want to make sure we’re doing the right thing. If everything goes according to plan, he should have 19 starts. 14 in the regular season, SEC Tournament, a Regional, a Super Regional, and then hopefully a couple starts in Omaha. So, the first weekend of this season is not going to make or break his season. We want to be careful about that.”

On managing the expectations of freshman outfielder/infielder Dylan Crews…

“Listen, I could sit here all day and talk about Dylan. Dylan is one of those kids that arrives at LSU and you know there’s something different about him. (DJ) LeMahieu had that same aura, (Alex) Bregman had that aura, (Antoine) Duplantis had that aura. Not only is Dylan an extremely talented player, but he has a tremendous attitude. He’s coachable as anybody we have; he works hard as anybody we have. You can coach him hard if you want to but there’s hardly ever a need to because the kid is so in love with the game.

“He has the Bregman qualities as far as his passion for the game. I tell him he has Bregman’s passion, but he’s got LeMahieu’s swing. He hits the ball with such authority to the opposite field. The other day he hit a home run off AJ Labas in a simulated game about halfway up the right field stands, in the opposite field. You don’t see right-handed hitters hitting them like that very frequently.

“The kid has a lot of talent. Now of course, LSU fans, when you start promoting a guy like this, they expect him to hit 100 home runs, bat .500, and never make an out. We have to keep reminding yourself that he’s an 18-year-old youngster. He’s going to have some days. The game is a humbling game. He’s going to have days. One of the things he’s going to have to learn to do, because he hasn’t had a lot of failure in his career, is be able to manage the failure without losing confidence and so forth. I would not be surprised at all, because of the maturity level of this kid, that he’s going to be fine.”