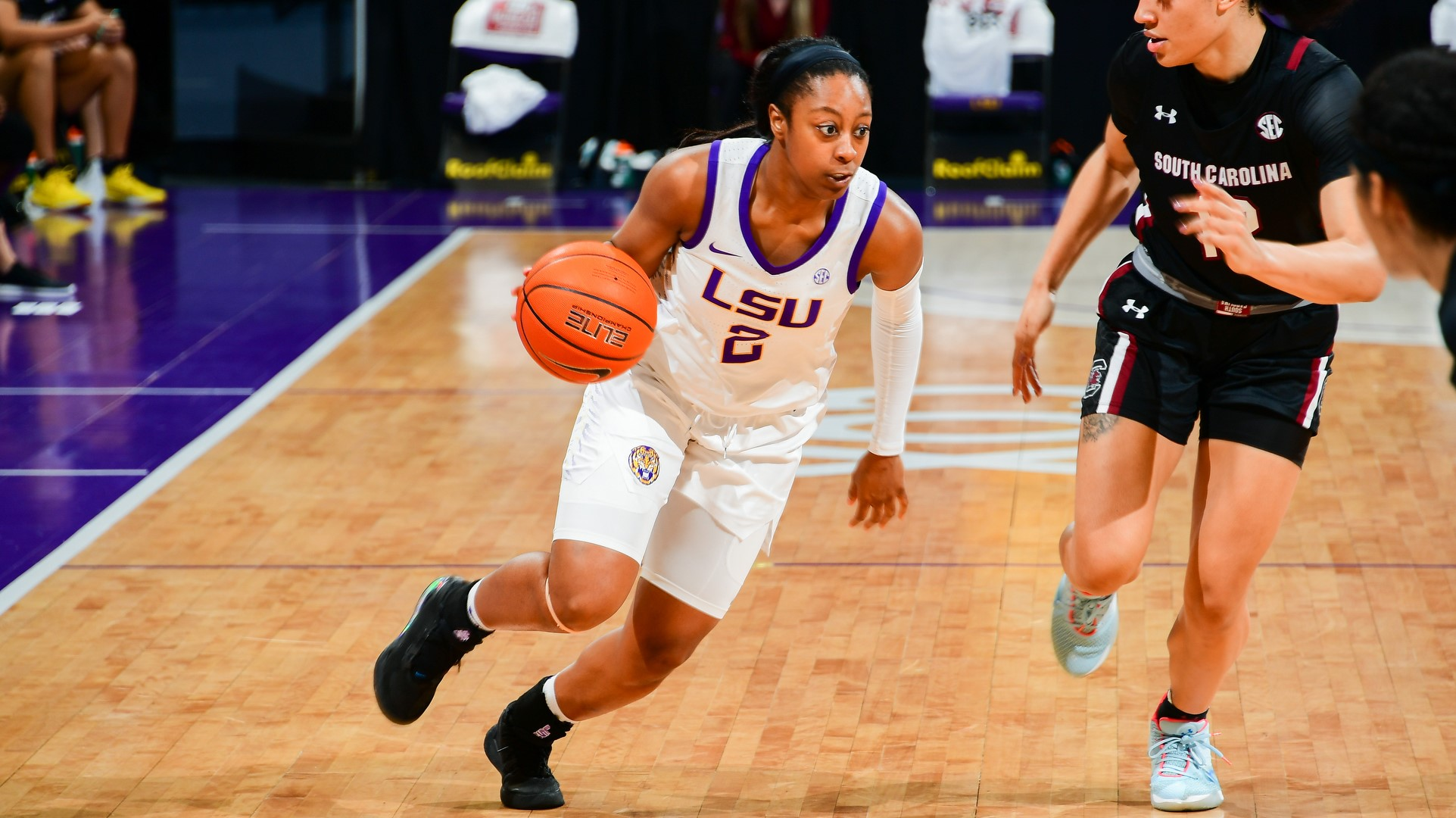 ATHENS, Ga. — The LSU women’s basketball team notched their fifth SEC win Thursday anchored by a 23-11 run in the fourth quarter, taking down the No. 22 Georgia Bulldogs inside Stegeman Coliseum, 60-52.

Sophomore Tiara Young continues to come off the bench and score at a high clip. She finished with 17 points, five rebounds, and two assists. Young had a strong night from the charity stripe going 5 of 6 (83.3%).

Redshirt-senior Faustine Aifuwa continues to inch closer to the second spot on LSU’s all-time block list, knocking away three attempted shots tonight. She finished with 12 points and six rebounds to close out her stats line.

Despite foul trouble down the stretch, senior Awa Trasi had one of her best games to date collecting 13 points and eight rebounds.

Senior Khayla Pointer became the eighth player in LSU women’s basketball history to dish out 400 career assists with her first one of the game. She finished with six assists, six rebounds, five points and four steals.

“We are that team that keeps talking about getting better and doing things together as a unit, and I felt that tonight we showcased that in the midst of our best player, Khayla (Pointer), not having the best offensive shooting night. Her presence on the floor and ability to create and get six assists was good. But I want to talk about the play of a couple of other players. Obviously, Faustine Aifuwa and Awa Trasi did a nice job. Those two came with just some very solid play for us offensively. When you hold a team to 52 points; Karli Seay, Jailin Cherry, Tiara Young, and Khayla Pointer, we went with our smaller lineup. I thought their defensive intensity and their hard work, them playing bigger than what they are on paper really made the difference in the game down the stretch. To be able to hold a team like Georgia in the 50s, have a big fourth quarter like we did, it started with our defense. I’m proud of these young ladies for getting themselves back, ready to play another tough team in the SEC.”

On not making a substitution in the fourth quarter…

“I was keeping my eye on the efficiency of the group. I wanted to see and make sure we were productive, and we cut back into and took the lead. I didn’t want to mess up their rhythm. We said, ‘Hey, you good?’ Everybody said, ‘Yeah, we’re good.’ I feel like we are in very good shape as far as conditioning and for them to run around and hustle and do all those things. Georgia is one of those teams that had some good looks at the basket, and the game is about making plays down the stretch. I thought we did a nice job of really trying to eliminate the play of Gabby Connally. With that being said, they eliminated the play of Khayla Pointer. So, then you kind of looked and saw who was gonna step up. We knew we were gonna have a big punch from Tiara Young. We expected that and she delivered. We also had a big punch again from Awa Trasi. That is what you have to have, you have to have players hitting their numbers and making sure that we are not allowing the opponent to have a big night against us.”

“One of the things that we do is we mark the floor in our practice facility, and we have what we call 70. That is where we want to shoot 70% from and our ability to get to that line or point on the floor is a high percentage shot for us, it really is. We’ve got players that are really good off the bounce, so we went in with that smaller lineup and were able to spread the floor a bit more, get some penetration for the pull-up jumper and I thought that was key for us. Being able to change up what we wanted to do offensively by going with four guards.”

The Tigers will return to the Pete Maravich Assembly Center Sunday, January 31, to take on the Ole Miss Rebels for the second time this season. The matchup will be streamed on the SEC Network Plus at 1 p.m. CT. It will be the annual Gold Game. Fans are encouraged to wear gold for the game. As always, you can listen to the Voice of the Tigers, Patrick Wright, broadcasting on 107.3 FM in Baton Rouge.