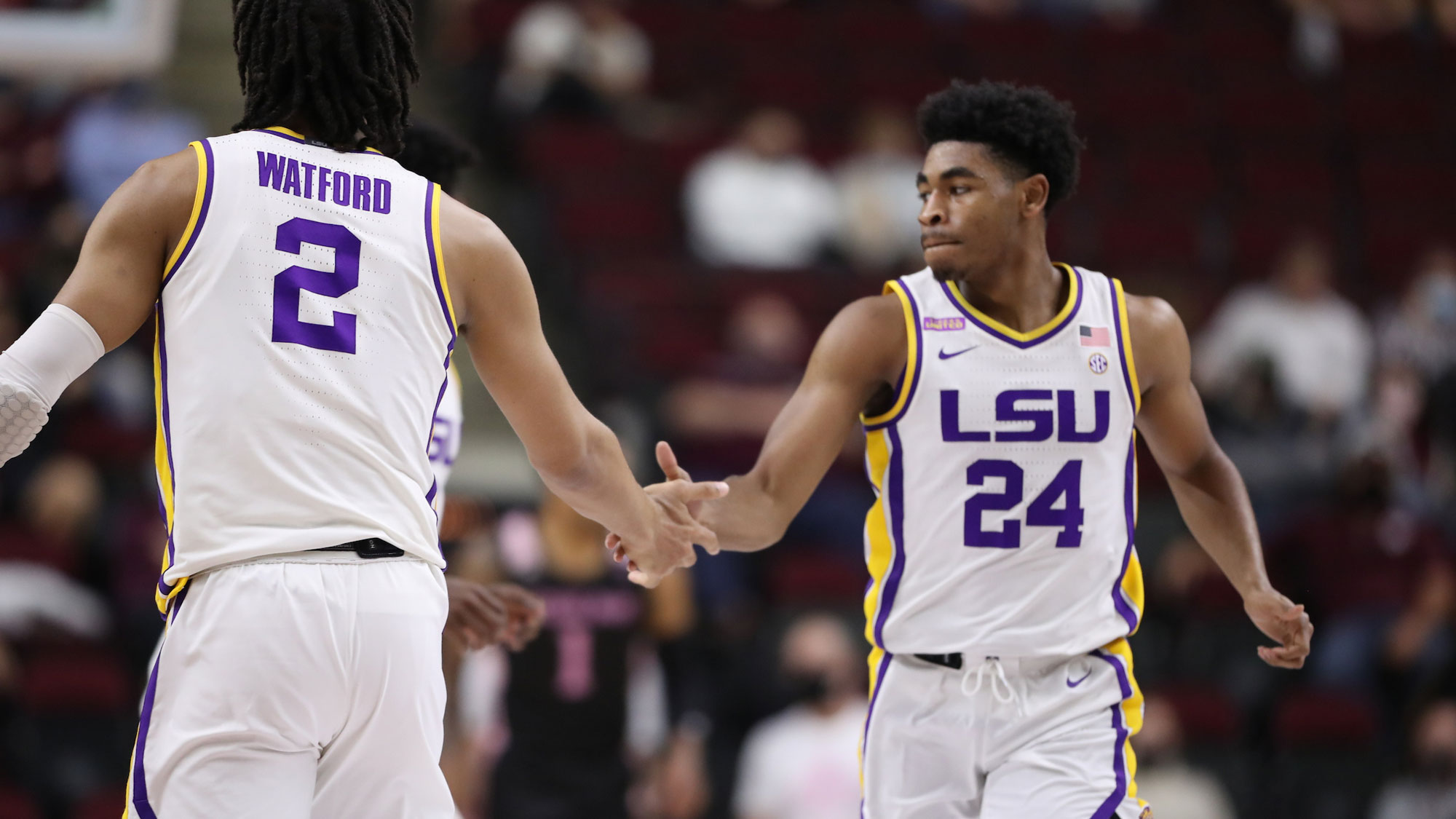 LSU scored the final 18 points of the game and won going away, 78-66, Tuesday night at Reed Arena.

Four Tigers combined for 71 of LSU’s 78 points with Cameron Thomas posting his freshman national leading 10th game of 20 or more with 28 points, while Javonte Smart just missed a double double with 19 points and nine assists. Trendon Watford had 13 points and eight rebounds, while Darius Days got back in double figures with 11 points.

After leading at halftime, Texas A&M hit their first six three-point attempts and in the midst of the barrage took a 58-57 lead with 13:07 to go in the game. After an LSU miss, another A&M three, pushed the Texas A&M lead to 61-57 just one minute later forcing LSU to call timeout. The lead went to six at 63-57 on a layup off a turnover under the goal and A&M was rolling at 63-57 entering the final 10 minutes.

Some 90 seconds later Thomas was fouled on a three-point attempt and the near 90 percent free throw shooter hit all three to push the LSU lead to 73-66. That lead reach nine when Shareef O’Neal got fouled and dropped two tosses in to make the Tiger lead, 75-66, with 1:43 left. Smart would hit a closing salvo with a three-pointer in the final 30 seconds.

Texas A&M during the LSU run would miss their final 15 shots and turned the ball over twice, including on a shot clock violation.

LSU finished the game with 22 assists for its 25 made baskets.

Despite the amazing comeback, LSU would actually lead for over 31 minutes of the contest.

The game was the third time in Will Wade‘s four years that LSU had made a great escape from Reed Arena. In 2018, it was freshman Tremont Waters hitting two three-pointers from distance in the final seconds to rally to give LSU a 69-68, one-point victory. In 2020, the Tigers hit two treys in the final minutes to rally from six down to force overtime and eventually score the win. Then this season, the 18-0 run that gave LSU its fourth consecutive win at Reed Arena and its eighth straight win over Texas A&M.

The Tigers now step out of conference play for Saturday’s SEC/Big 12 Challenge as No. 10 Texas Tech comes to town to take on LSU at the Maravich Center. The game is set for 1 p.m. on ESPN2 and will be broadcast on the affiliates of the LSU Sports Radio Network.

The Network will also feature the Will Wade Show presented by Hancock Whitney Wednesday night at 7 p.m. from TJ Ribs on Acadian Thruway with Coach Wade and the Voice of the Tigers, Chris Blair.

Opening statement…
“I am proud of our guys and thought it was a great response. We got off to a great start to allow for that tremendous response. We had to find a way to win and we did. To be down six and then close the game. We talk about six-minute games all the time and the need to take care of the ball, solid defense and making our free-throws. I was proud of our leadership. It’s not easy to come back from what we went through the last couple games. Getting our clock cleaned and were ready to go today. I felt that energy all day today and yesterday in practice. Credit to our players, they did an awesome job.”

On the defensive strategy…
“You can’t take away everything on defense. You can’t pitch a shutout. They came in shooting 26 percent and hit some off the bounce. Even hitting 6-of-6 from the end of the first half into the second. The problem wasn’t the 3-pointers, it was turning the ball over four times to give them easy shots. We missed that front in of the one-on-one. That is what our defensive philosophy is. They took over half their shots from the three, which was probably not what they were wanting to do. That stuff just tends to even out.”

On what he said in the last timeout …
“I told them we are built for this and this is what we do. This is what life on the road in the SEC is. We needed to stick to our six-minute game. Our confidence comes from our six-minute game. We are good in those situations. We needed to play with great energy to get this done. I saw great effort and execution and that will get it done. I thought our guys did that. We had some warriors, most of those guys played some major minutes. Shareef (O’Neal) came up big for us at the end along with Eric Gains on the defensive end. I was pleased with the overall flow from our team tonight.”

On the importance of this win…
“This is huge. Anytime you get a win on the road in the SEC, it’s a big win. With the stretch and losing to Alabama and Kentucky this was one we needed to play well in and find a way to win. They are all big, especially in the SEC. We prepared and responded the right way and was a good night for us.”

On the importance of the last few minutes…
“We want to lock in as a whole team. We know that most people say our defense is our weakest link, but we found us. We were able to do a big thing and find the help from our coaching staff. Locking in on defense first allows for the offense to catch up.”

On the last timeout game plan…
“They started hitting some big shots. Savion Flagg and Jay Jay Chandler were hitting shots early before everyone else was able start to hit. We wanted them to contest every shot and drive to shoot. We were wanting to see if they could score over us in the lane.”

On the offensive run…
“We knew we were going to make a run and we did. We wanted to bounce back from it, and we did a good job of doing that. We were able to make a run at the end of the second half closing in on the score. We kept our heads up and moved on to our next play. Coach said we would make our run and that is what we did.”

On the need for this win…
“We were desperate to win this game. We have already dropped two in a row and were not looking to move it to three in a row. I think our biggest thing was to come out tonight and respond. We did a good job of sticking to that. The play that (Darius Day) made was a big play. Having him dive on the ball to give us the possession was big and turned the game. He is the one to make those winning plays and that is what makes him, him.”

On the defense performance tonight…
“The plan was to pressure them. They have had a few tough threes off the dripple and we were wanting to make them drive for the finish. We needed them finishing over Darius (Day), Shareff (O’Neal) and myself at the rim. We made them get off the line and drive it in. We did a good job executing that after talking it out in our timeout. We were looking to make it tough for them and it worked out.”

On his offensive performance…
“I felt good. I was able to get into a better rhythm early on. I was able to shoot some two’s, midranges and floaters. I got myself into my rhythm.

On the second quarter shots…
“We were down, and we knew we needed some big shots. I come in clutch to make big shots for my team. It happened to be two threes’, which I’ll take.”

On playing off the defense…
“I played off of what the defense gave me. They gave me a lot of twos at the beginning and one wide-open three. I was able to take that and make it. Texas A&M only allowed for me to get a few lay ups and mid-range shots. I just took what they gave me tonight.”