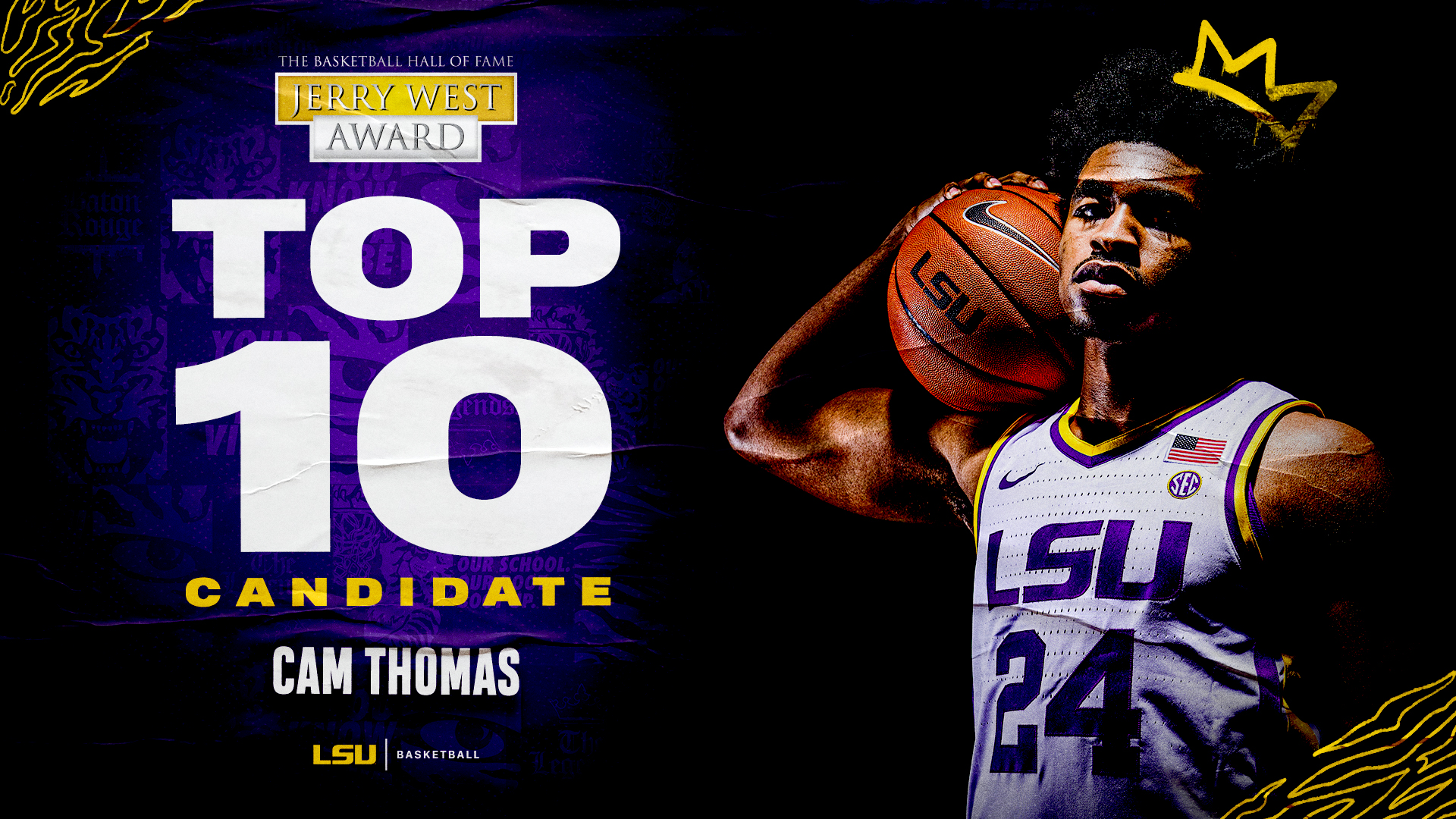 SPRINGFIELD, Massachusetts — The Naismith Memorial Basketball Hall of Fame announced Tuesday that LSU freshman Cameron Thomas is among the Top 10 candidates for the 2021 Jerry West Shooting Guard of the Year Award.

Named after Class of 1980 Hall of Famer and 1959 NCAA Final Four Most Valuable Player Jerry West, the annual honor in its seventh year recognizes the top shooting guards in Division I men’s college basketball. A national committee of college basketball personnel determined the watch list of 20 candidates in November, which has now been narrowed to 10.

Jerry West attended West Virginia University and averaged 24.8 points and 13.3 rebounds per game in his three varsity seasons. He led his team to the NCAA Championship game in 1959 and was named a consensus All-American in 1959 and 1960. In the summer of 1960, he was co-captain of the U.S. men’s basketball team and won an Olympic gold medal. As a professional player, West played 14 seasons in the NBA with the Lakers making the All-NBA First Team 10 times. West won an NBA championship in 1972 and was named the NBA Finals MVP in 1969 despite his team not winning the championship. In 1996, he was named a member of the NBA’s 50th Anniversary All-Time Team.

Thomas is the Southeastern Conference leader in scoring at 21.7 points per game and has nine games of 20 points or more which is the most by a Division I freshman. He was the first SEC player over the last 25 seasons to score 15 or more in the first seven games of his career. Thomas set an LSU school record earlier in the year with 42 consecutive made free throws.  He leads the league in free throw percentage at 88.2 percent (90-of-102).

In late February, five finalists will be presented to Mr. West and the Hall of Fame’s selection committee. The winner of the 2021 Jerry West Award will be presented April 9, 2021, along with the other four members of the Men’s Starting Five. Additional awards being presented include the Bob Cousy Point Guard Award, the Julius Erving Small Forward Award, the Karl Malone Power Forward Award and the Kareem Abdul-Jabbar Center Award, in addition to the Women’s Starting Five. College basketball fans can support their favorite players by participating in Fan Voting presented by Dell.

For more information on the 2021 Jerry West Award and the latest updates, log onto www.hoophallawards.com and follow @hoophall and #WestAward on Twitter and Instagram. Starting Five Fan Voting presented by Dell Technologies will go live on Friday, January 29 on HoophallAwards.com.