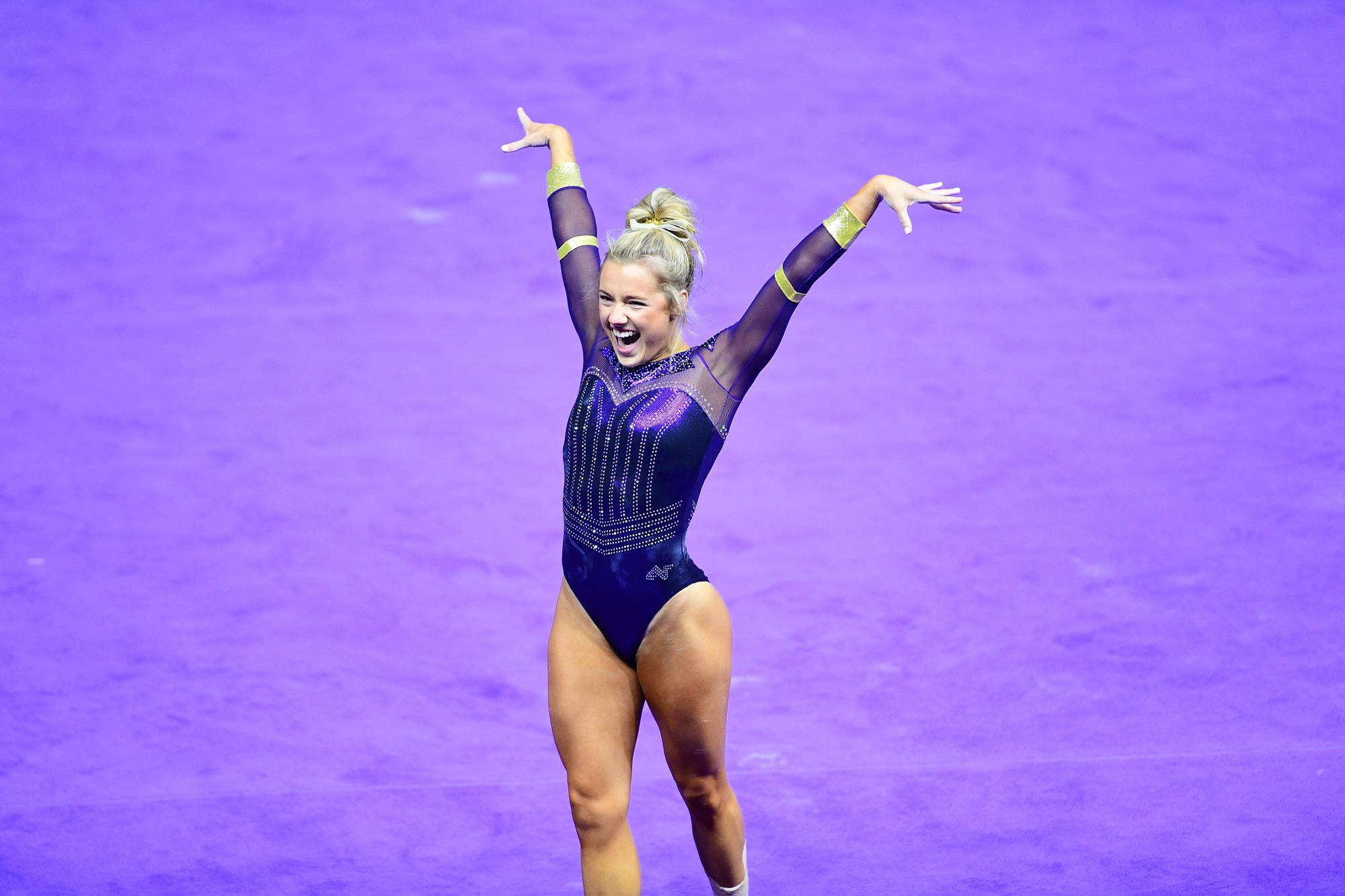 LSU gymnasts swept the night on all four events in the all-around. Freshman Haleigh Bryant led the way with a victory on vault and in the all-around. Seniors Sami Durante, Reagan Campbell and Sarah Edwards earned wins on bars, beam and floor.

LSU now owns an average score of 197.008 and sits at second in the nation after competition on Friday night.

“I think the story of the night is what the senior class was able to do and the fight they brought,” head coach Jay Clark said. “The freshmen showed a lot of grit tonight as well in some tough places. The way we started and the way we finished shows what this team can do and the potential they have.”

Tigers Open with Lead on Vault
LSU scored a 49.275 to open the meet and led the Bulldogs after one rotation. Chase Brock and Alyona Shchennikova opened with scores of 9.825 and 9.875 respectively. Edwards followed with a 9.825 and Durante filled in with a 9.850. Bryant anchored the event with a 9.90 to earn the victory.

LSU Stay on Top with Bars
The Tigers maintained their lead with a 49.125 on the uneven bars. Kiya Johnson started LSU off with a 9.875 followed by Olivia Dunne and Bryant scoring a 9.700 and a 9.850 respectively. Shchennikova then earned a 9.800 and Durante scored a 9.900 as the event anchor for the win.

Campbell Shows Out On Beam
A 49.350 kept the Tigers on top against Georgia. Christina Desiderio began the beam lineup with a 9.800. Only going up from there, LSU counted the scores of Durante, Bryant and Dean, each scoring 9.850, 9.875 and 9.875 respectively. Reagan Campbell capped off the lineup with a season high of 9.950.

Tigers Seal Win on Floor
The Tigers posted three scores at 9.900 or higher to seal the win over Georgia. Dean made her first home appearance on floor this year, posting a career high 9.900. Campbell scored a 9.875 in the second spot and the Tigers used another career high 9.900 by Shchennikova. Edwards posted a career high 9.925 for her first career floor win and Bryant anchored with a 9.850.

Next Up
LSU returns to the road for the final meet before heading into the bye weekend. The Tigers will take on Auburn at 4 p.m. CT Friday, January 29. The meet will be televised live on ESPN2.