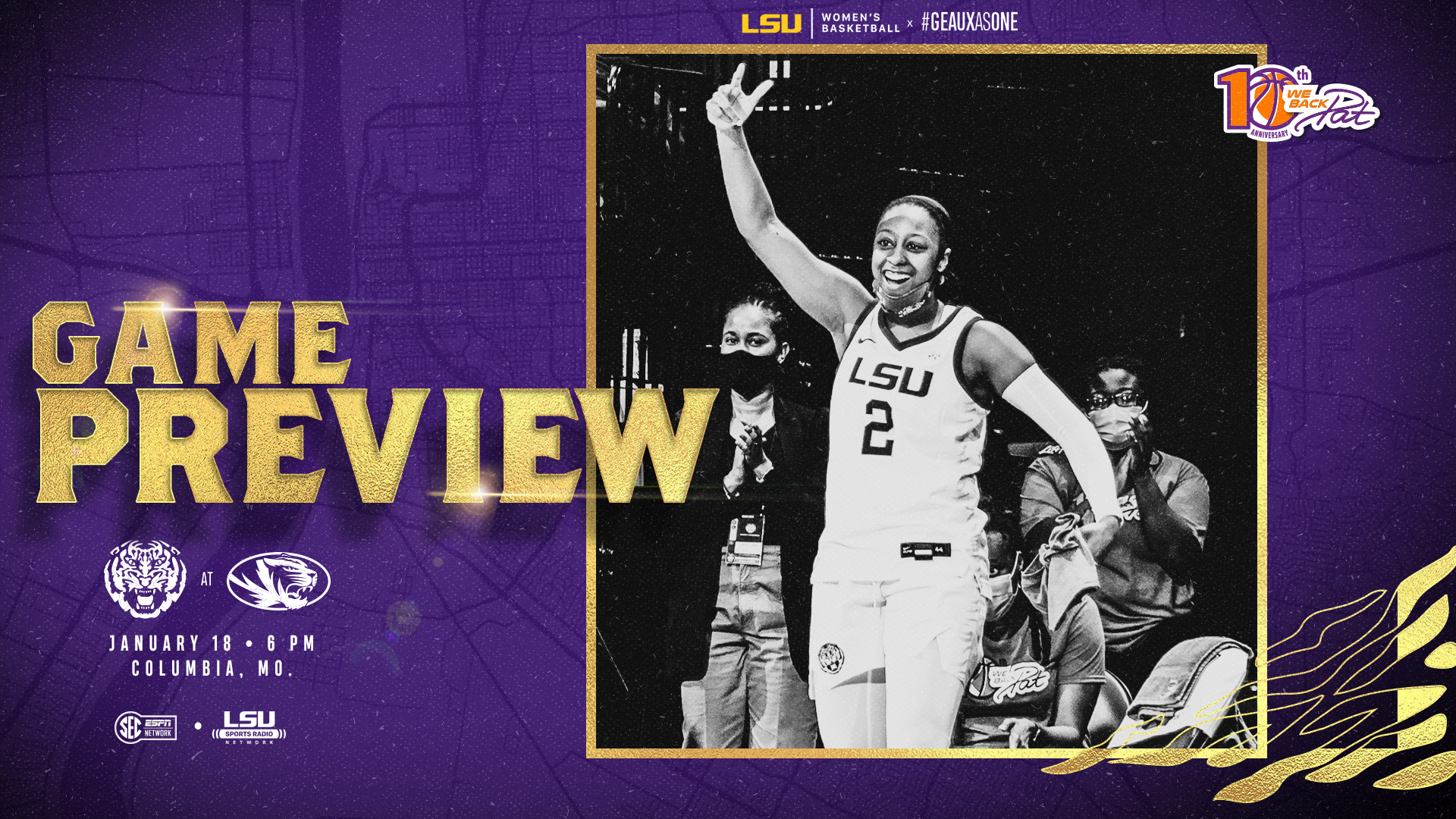 BATON ROUGE, La. – The LSU women’s basketball team travels to Missouri for a Monday night game on the SEC Network. Game time on January 18 is set for 6 p.m. CT. The Tigers are 5-6 overall and 3-2 in SEC play, while Missouri is 5-3 overall and 1-2 this season. It will be Missouri’s We Back Pat game.

The SEC celebrates its annual We Back Pat Week beginning with games on January 14 and runs through January 21. It is the 10th anniversary of the celebration of the legendary coach Pat Summitt. Teams use the time to bring awareness to Coach Summitt’s worldwide influence through basketball and the continuing need for research to find a cure for Alzheimer’s disease. Fans can donate to The Pat Summitt Foundation at patsummitt.org.

The game will be broadcast on the SEC Network with Courtney Lyle and Carolyn Peck calling the game. Fans can watch SECN on their local cable and satellite providers, on the internet at ESPN.com/watch or on the ESPN app. A link to the game is available on LSUsports.net.

LSU is 5-6 on the season and is 3-2 following Thursday night’s overtime victory against No. 7 Texas A&M, 65-61. Sophomore Tiara Young came off the bench to score a career-high 20 points as the Tigers extended their home win streak against the Aggies to five games. Senior Khayla Pointer had a solid game with 17 points and six assists, while senior Karli Seay had her second consecutive game with at least five steals. Redshirt senior Faustine Aifuwa recorded her sixth double-double of the season and 15th of her career with 16 points and 11 rebounds.

Pointer leads LSU with 15.5 points, 4.7 assists and 2.6 steals per game, while her points average jumps to 19.8 in SEC action. Redshirt senior Faustine Aifuwa leads the squad with 9.0 rebounds and 1.7 blocked shots per game. She is also the second leading scorer on the team with 11.5 points per game and 12.8 in SEC play. In conference play Young is averaging 13.4 points per game and shooting 52.7 percent from the field.

This will be just the 15th meeting between LSU and Missouri. LSU leads the series last season, 10-4, with the teams splitting last year’s series as each won on its home court.

Tickets are available for Sunday’s game against South Carolina in the PMAC. Single game ticket prices are $7.00 for adults and $5.00 for youth ages 3-12. To order season and single-game tickets for LSU women’s basketball home games, go to LSUtix.net.