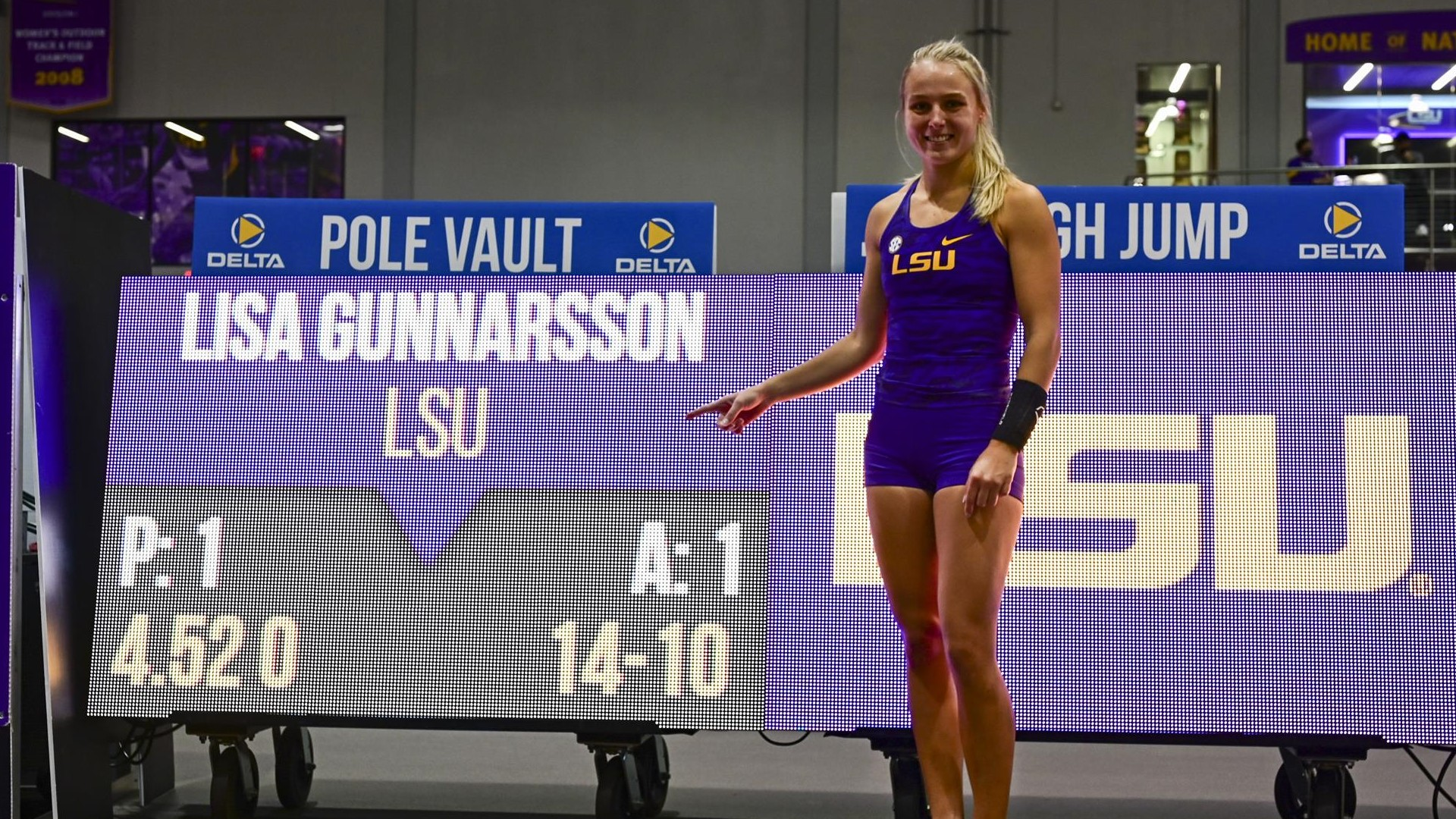 Baton Rouge, La. – Lisa Gunnarsson, a senior standout from Paris, France, broke her own school record with a clearance of 4.52 meters (14′ 10.0″) in the pole vault on Saturday at the Purple Tiger Invitational; Gunnarsson’s clearance is the best in the world for the 2021 indoor season to date.

Gunnarsson was one of 16 event winners for the LSU track and field program on Saturday. The Tigers also received from impressive performances from veteran JuVaughn Harrison as well as an impressive mark by freshman Monique Hardy in the weight throw.

Lisa Gunnarsson was the star of the Tiger’s season debut as she extended her school record clearance in the pole vault and registered the highest mark in the NCAA so far this season.  Gunnarsson recorded a clearance of 4.52 meters (14′ 10.0″) to take the gold medal in the pole vault event.  Her NCAA leading mark would have ranked as the third best in the NCAA last season.  Gunnarsson was perfect as she cleared bars of 4.25 meters, 4.35 meters, and 4.45 meters before she set the school record.  She took three attempts at the height of 4.61 meters but was unable to clear it.

JuVaughn Harrison started the 2021 indoor campaign off right where he finished the 2020 indoor season as he recorded an NCAA best and world lead leap of 7.98 meters (26′ 2.25″) to win the long jump event.  Ji’eem Bullock made his collegiate debut on Saturday and placed second in the long jump event with a mark of 7.57 meters (24′ 10.0″).  Another freshman that made an immediate impact was Monique Hardy who captured the gold in the weight throw event.  Hardy threw a distance of 20.54 meters (67′ 4.75″) which ranks as the fourth best mark in the country and the top distance by freshman this season.  Her toss also ranks as the third best in school history.  Lorena Rangel Batres also got in on the Tiger’s impressive freshmen performances as she won the 600-meter run with a time of 1:35.31.  Serena Bolden was the only Tiger to compete in the women’s long jump event but came out victorious with a distance of 5.71 meters (18′ 9.00). Abigail O’Donoghue was the winner of the high jump event with a clearance of 1.84 meters (6′ 0.50″).

LSU also found a lot of success from their sprinters as the women’s team won both the 60 meter dash and the 60 meter hurdles.  The Tigers were led by Symone Mason as she won the 60 meter dash with a top three NCAA best time of 7.41.  Ariyonna Augustine won the silver medal in the event with her time of 7.55 which registers as the eighth best time in the NCAA this season.  LSU also had the top two finishers in the women’s 60-meter hurdles as Milan Young placed first with a personal record time of 8.17 and was followed by Alia Armstrong who clocked a time of 8.32.  Young’s winning time is the top time in the NCAA this season whereas Armstrong’s time sits in the fifth spot.  Kyndal McKnight and freshman Mahalia Mitchell were the top two finishers in the women’s triple jump as they recorded marks of 12.61 meters (41′ 4.50″) and 12.59 meters (41′ 3.75″), respectively.  Pole vaulters Brock Meyer and Kenny Odinet continued the Tiger’s trend of finishing with the top two athletes as they placed first and second respectively.  Meyer and Odinet both led the way with clearances of 4.85 meters (15′ 11.0″), but Meyer won by having fewer misses at the previous height.

The distance runners also contributed some of the most impressive performances of the day for the Tigers.  Sara Funderburk and Shanya Luna were the top two finishers in the 800-meter run as they put together some winning times.  Funderburk recorded a personal best time of 2:17.38 which is the 19th best time in the country so far and Luna finished with a PR of 2:18.30.  On the men’s side, Davis Bove and Eric Coston finished in first and second in the 800 meter run.  Bove ran a personal record time of 1:53.13 to take the gold and Coston was awarded silver for his personal record time of 1:54.26.  Jackson Martingayle contributed a winning performance in the 3k race with his time of 8:32.  Ashley LaJocies was the first place finisher in the women’s mile run with a time of 5:18.14.

The LSU Track and Field teams will be back in action on Friday, January 22 at the Woo Pig Classic which will be held at the Randal Tyson Track Center in Fayetteville, Arkansas.  For the full 2021 Indoor Track and Field season schedule, check out LSUsports.net.