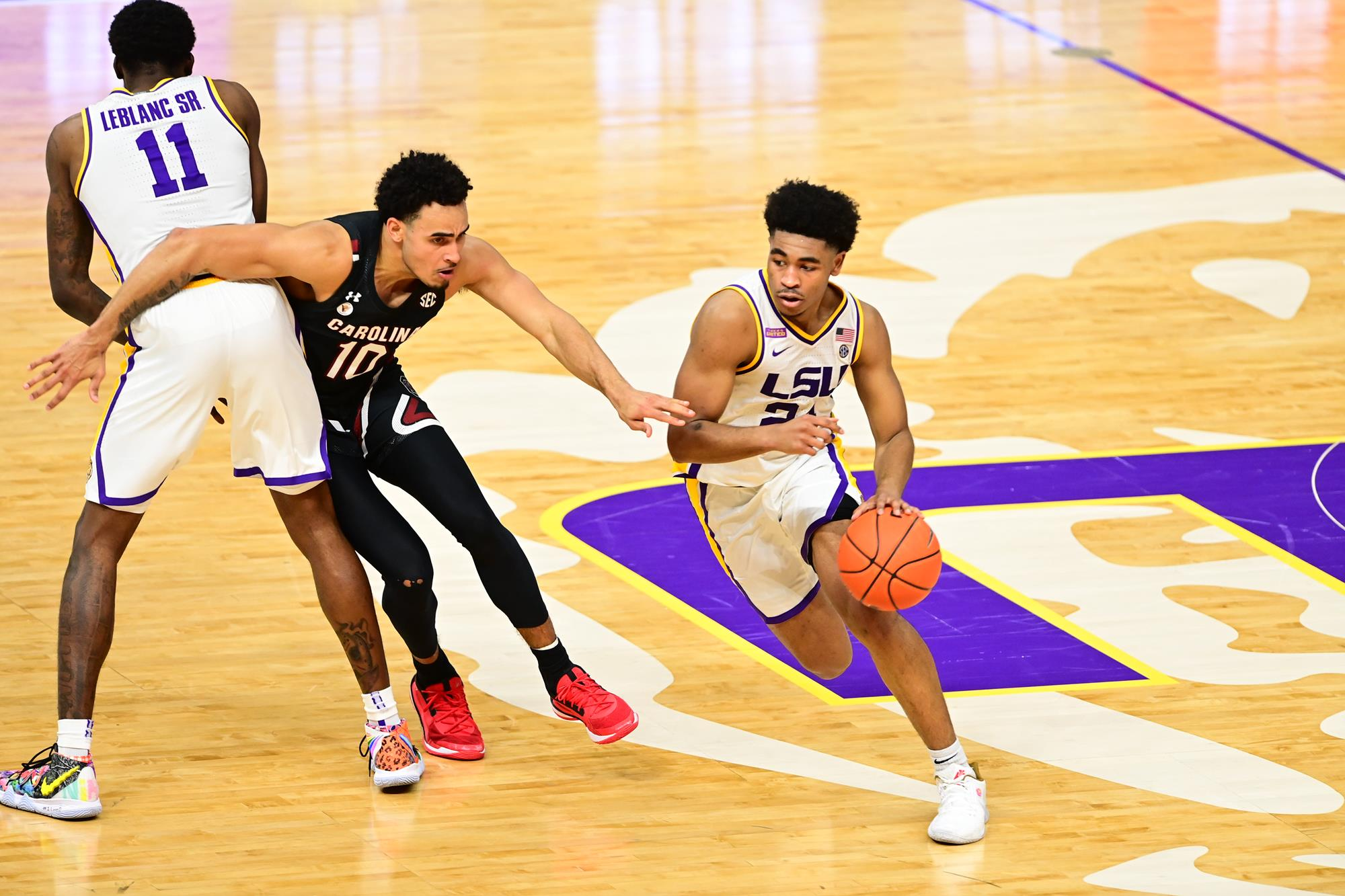 The Tigers are now winners of four straight games, including the first two games of this three-game homestand, to move to 10-2 and 5-1 in the Southeastern Conference. South Carolina, playing for the first time since Jan. 6, falls to 3-3 and 1-1 in the league.

LSU now plays first-place Alabama Tuesday night at 8 p.m. on ESPN2 here in the Pete Maravich Assembly Center. The game will also be broadcast on the affiliates of the LSU Sports Radio Network.

South Carolina was able to get LSU out of tempo in the first half hitting 15-of-33 first half shots for 45 percent with five three-pointers. The Gamecocks had as much as an 11-point lead in the first half and led by four at halftime, 38-34.

In the second half, LSU fell behind by nine two minutes in and trailed 57-50 with 13:54 to play. But Javonte Smart hit two three pointers and Watford had a paint bucket in between the treys to give LSU a 58-50 lead with 12:09 to go.

But South Carolina wouldn’t go away and built a 72-64 lead back with 7:47 to go. But LSU fought back, outscoring the Gamecocks, 10-1, to take a 74-73 lead with 4:38 to play. The Tigers began going to Watford consistently in the post and he was able to score or get fouled and go to the line.

With the game tied at 76, LSU took the lead for good on another 8-0 run as Watford hit two free throws (78-76). Cameron Thomas then added the next six points on a field goal and four free throws to put LSU up, 84-76 with 34 seconds to play.

Thomas led LSU with 25 points (7-of-19 shooting, 2 treys, 9-of-10 free throws), while Trendon Watford posted his third straight game over 20 points with 23 points, seven boards and five assists. Javonte Smart had 15 points while Darius Days had 11 points and a team high nine boards.

The teams each had 17 second chance points but South Carolina got a 10-point advantage on fast break points. The Gamecocks had 8 dunks, missing three, while LSU was 4-of-4 on dunk attempts.

It was the second straight game LSU had a 50-point half and the 10th time in the Will Wade era that LSU has rallied to win from behind entering the final five minutes.

Opening Statement…
“We found a way. South Carolina played great. We had no answer for (AJ) Lawson in the first half. Did a better job in the second half. I was proud of our guys. Javonte (Smart) responded well. Came up huge for us in the second half. Played through Trendon (Watford). Cam had some great free throws and some great finishes down the stretch. I thought (Josh) LeBlanc gave us tremendous energy tonight as well. Good team effort. Just happy to win. It’s tough to win in the SEC. I give Bruce (Shingler) and Coach (Frank) Martin, their staff and their team a lot of credit. They were game from the get-go and ready to go. They played tremendously all night long. We were just fortunate enough to make some shots in the second half and make a few things happen.”

On what he saw in his defense in the last eight minutes …
“We just have to be more consistent. We talk about those six-minute games. We did a great job in the six-minute game. One of our biggest problems defensively was that we turned the ball over so much. We gave them nine points in the first half off pick sixes. We gave them another one against the zone there in the second half. If we can get back and get our defense set. We had to make a couple of adjustments in the two-two-one. We were losing (AJ) Lawson behind in the one-three-one. Our guys really dug in. It helps when we have (Josh) LeBlanc out there. He can really set the tone out there for the defense and he really did a nice job of that.”

On Trendon (Watford) in the last few minutes …
“Trendon did a great job all night. They were collapsing on him. He did a good job finishing. He did a great job at the free-throw line. Nine of ten from the free-throw line. He was really really good. You have to play through your hot hand. Then Cam (Thomas) was able to make plays down the stretch off the ball screens with Trendon also. It was a team effort. We were able to play through Trendon in the post. That’s where the mismatches were. That’s where we were able to make things happen.”

On last eight-minute stretch on defensive end…
“We talk about defense. We know we can score the ball. They were getting some buckets; some back-door looks. We just wanted to lock in when we were down five. We just wanted to get back in that lead, and cut it and tie the game, and on to play defense.”

On Trendon Watford’s down-the-stretch performance…
“They were playing him one-on-one in the post. Once we figured that out, we kept going to him. Cam (Thomas) stepped up again in the second, like he did in the first half. We wanted to feed Watford, because nobody can guard him.”

Guard Cameron Thomas
On playing through physical play…
“It’s a physical game, didn’t really affect me. Coming in we knew it was going to be physical. So, we were already prepared. It was kind of expected so we were good with that.”

How important the free-throw line was down the stretch…
“For sure, we knew coming in they were going to be very physical. It was going to turn into a lot of fouls, a free-throw shooting contest. Make our free throws and close the game out. We already knew that coming in.”

Forward Trendon Watford
On his game down the stretch…
“That’s why I work, I get up every morning working out with coaches at ten in the morning. I try to be built for this. I pride myself on that, wanting the ball in my hands, when the game is on the line to make plays. I think did a good job of that, making free throws and making baskets. Just trying to help my team win. I’m going to keep getting better, keep doing what I do.”

On drawing fouls and physical play late…
“Coach Wade, he told us were going to shoot a lot of free throws in this game. We did. I’ve been working on my free throws, all summer, all offseason. Every time I get up to the line it’s like I’m in the gym by myself. I keep locking in on that. We’re a great free-throw shooting team and we’re going to get better on that.”
—
South Carolina Assistant Coach Bruce Shingler– Postgame Quotes

Opening Statement…
“I thought we gave a valiant effort. I thought played their tails off given the circumstances of the last two weeks. Given the circumstances of Our General (Frank Martin), Chuck Martin, and Doug Edwards not being here with us, as well as Jaylen (McCreary) and Alanzo (Frink), but I thought our effort was there. I thought our guys laid it on the line. We came up a little short, but I saw a lot of positives out of this game and I think we have a lot to build on.”