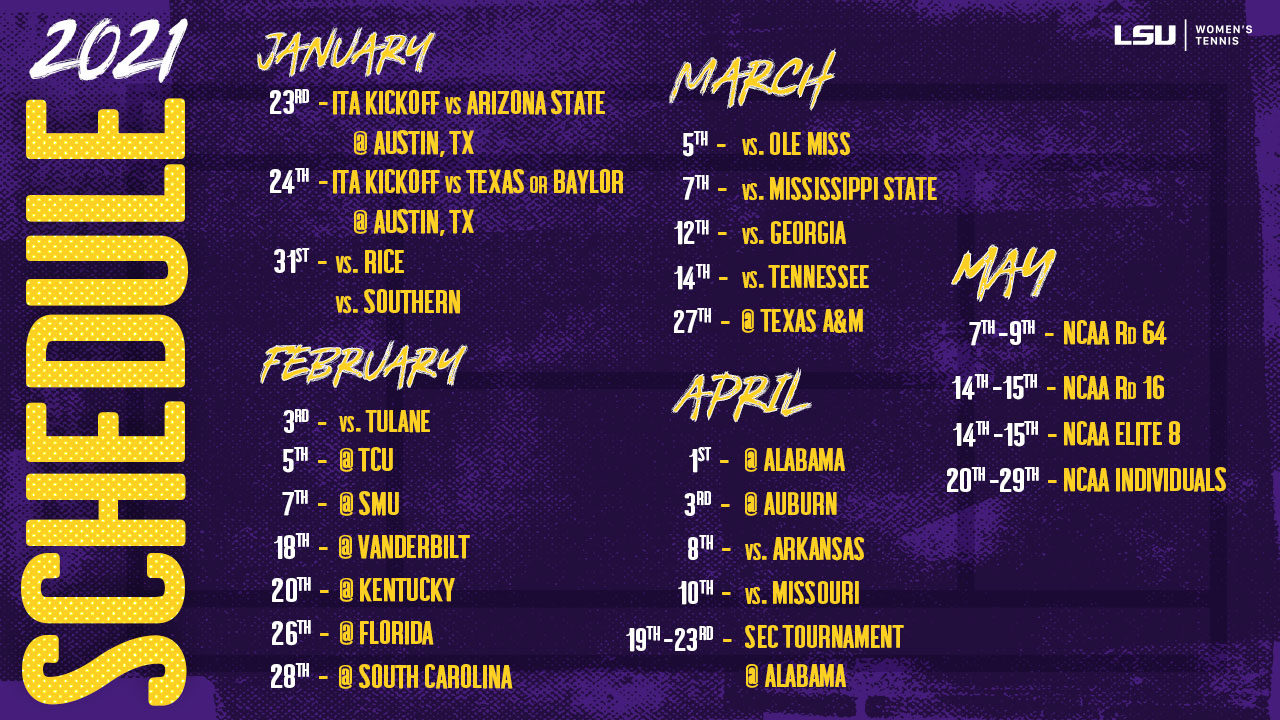 BATON ROUGE – The LSU women’s tennis team announced its schedule for the 2021 dual season on Friday. The 20-match schedule will begin with the Tigers traveling to Austin, Texas to participate in the ITA Kickoff Weekend alongside Arizona State, Baylor, and host team Texas beginning on Saturday, January 23.

The LSU Tennis Complex will host its first matches of the season on January 31 when the Tigers host Rice and Southern in a doubleheader. In compliance with Covid-19 protocols, home matches will be capped at 80 people when matches are indoors and 350 people for outdoor matches. LSU hosts once again on February 3 against Tulane before ending the non-conference portion of the schedule with road trips to TCU (February 5) and SMU (February 7).

LSU opens SEC play on the road with matches against Vanderbilt on February 18 and Kentucky on February 20. The Tigers close the month of February with another road skip when they take on Florida (February 26) and South Carolina (February 28).

The Tigers return to Baton Rouge for a stretch of home games in March that begins on March 5 as LSU hosts Ole Miss, followed by a match against Mississippi State on March 7. The following weekend sees the Georgia Bulldogs come into town for a match on March 12 before a match against Tennessee on March 14 concludes the home stretch.

Following a conference-wide bye the weekend of March 19, LSU ends March with an away match against Texas A&M on March 27. The Tigers open April on the road, taking on Alabama (April 1) and Auburn (April 3) before ending the regular season at home with matches against Arkansas (April 8) and Missouri (April 10).

All 14 SEC women’s tennis teams will head to Tuscaloosa, Alabama to participate in the 2021 SEC Tournament beginning on April 19.

**All dates and times are subject to change.