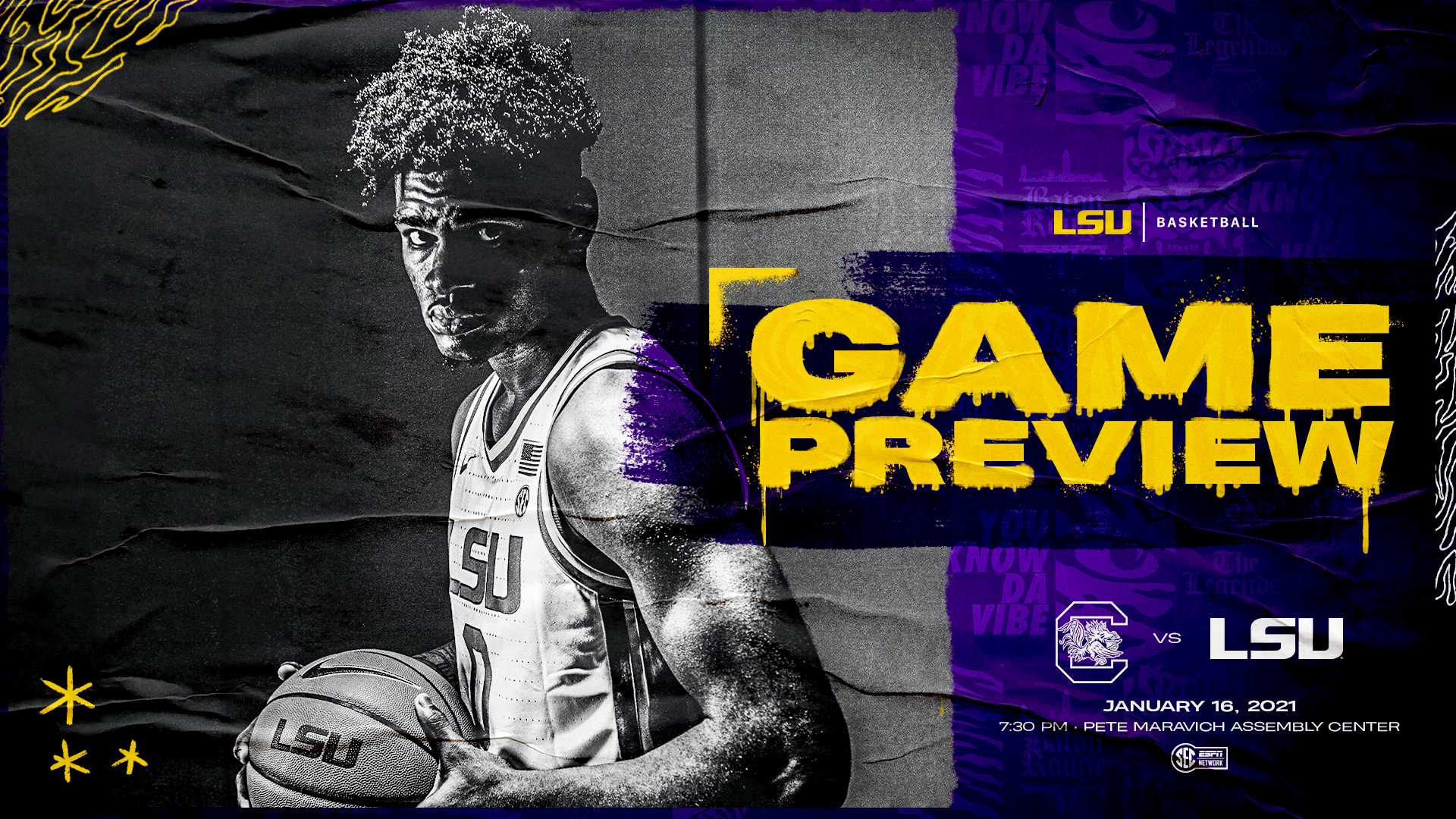 BATON ROUGE – The LSU men’s basketball team looks for a fourth consecutive victory when the Tigers host the South Carolina Gamecocks in the Southeastern Conference’s final game of the Saturday schedule at 7:30 p.m. CT at the Pete Maravich Assembly Center.

The Tigers are 9-2 overall and 4-1 in the SEC while South Carolina, returning to play for the first time since Jan. 6, is 3-2 and 1-0 in the league, one of the two remaining unbeaten teams in the league.

LSU is coming into the game off wins over Georgia (94-92, OT), at Ole Miss (75-61) and Arkansas (92-76). Especially in the last two wins, the Tigers jumped out to strong offensive and defensive starts, opening up an 18-point halftime advantage against the Rebels and 20 points against the Razorbacks.

The game will be the final game of the night televised by the SEC Network with Mike Morgan and Mark Wise from their respective homes, while the game will be broadcast on the affiliates of the LSU Sports Radio Network (Guaranty Media flagship Eagle 98.1 FM in Baton Rouge) with the “Voice of the Tigers” Chris Blair and former LSU head coach John Brady on the call.

South Carolina last played on Jan. 6 when AJ Lawson scored a career high 30 points for the Gamecocks in a 78-54 win over Texas A&M. This will be Carolina’s third game since Dec. 5, and due to COVID-19 health and safety protocols, South Carolina head coach Frank Martin, assistant coach Chuck Martin, and Doug Edwards, who handles student-athlete development for the team, will not be in attendance in Baton Rouge. Assistant coach Bruce Shingler will be the acting head coach for the game.

The Tigers had an 18-0 run early and basically held Arkansas in check after the Razorbacks quickly jumped out to a 4-0 lead. LSU lead by as much as 31 in the first half Wednesday, before going to the dressing room up, 51-31.

Trendon Watford (23-10) and Darius Days (18-13) each had double doubles in the win over Arkansas with Watford scoring over 20 for the second straight game. All five starters were in double figures with Cameron Thomas scoring 17 against the Razorbacks and point guard Javonte Smart had 13 points and five assists.

Thomas, who played 32 minutes after injuring his ankle early in the Ole Miss game, continues to lead the team at 21.8 points a game. Watford is at 18.3 points per game and 7.0 rebounds, while Smart is at 15.2 points and 4.2 assists. Days’ numbers are 13.9 points a contest and 8.5 rebounds. While Thomas leads the league in points per game, Days is second in the league in rebounds per game.

The Tigers conclude this three-game homestand on Tuesday night at 8 p.m. when Alabama comes to the Maravich Center.