Tigers Take Down No. 7 Texas A&M In OT 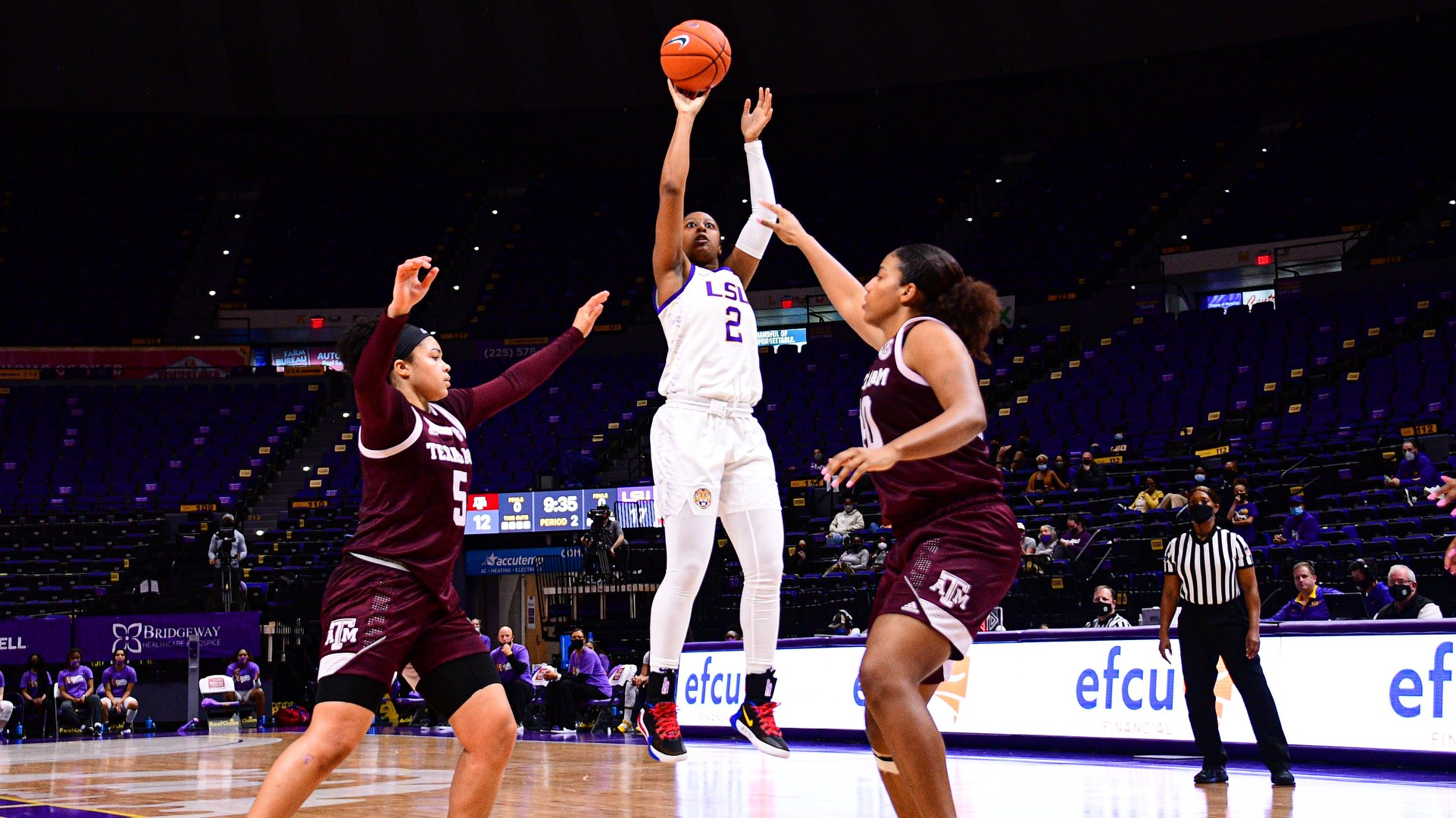 LSU moves to 5-6 on the season and 3-2 in the SEC. Texas A&M collects its first loss of the season falling to 12-1. They also have their first loss in the SEC, sitting at 3-1 after tonight’s game.

The Tigers brought a tenacity on the defensive side early, holding the Aggies to their lowest scoring total in the first half this season at 26.

Texas A&M jumped out to the early lead at 10-8, but LSU was able to curtail the momentum the Aggies gained for the majority of the game leading for three quarters.

Sophomore Tiara Young continued to shine, collecting a career-high 20 points and four rebounds. Senior Karli Seay showed off her relentless attitude when it comes to defense. She finished with five steals on the night accompanied with eight points, four rebounds and three assists.

Redshirt-senior Faustine Aifuwa contributed at a high clip, collecting another double-double, her sixth of the season and the 15th of her LSU career. She finished with 16 points, 11 rebounds and three blocks.

Senior Khayla Pointer had a night to remember, showing off her skills on both sides of the floor. She collected 17 points, seven rebounds, and six assists. With this performance, she keeps climbing the LSU career assists list, currently sitting at No. 8 with 394. Pointer surpassed former Tiger Rhonda Hawthorne (391; 1982-86).

On the team’s persistence…

“We didn’t want to look at this game and feel like we hadn’t prepared. We knew that this was going to be a fight to the end. Texas A&M is a very good basketball team, but so is LSU. We had players that we have been counting on in the last four games and I thought the play of Tiara Young was huge for us. She showcased why she’s going to become one of the best players in our league. The play of Khayla Pointer has just been solid for this team, and she’s a player that is very crafty and, obviously, she makes things a lot easier when the ball’s in her hand, but it was great to be able to come back in the second half with Faustine Aifuwa. I thought she really did a nice job of clearing a lot of those boards that we needed against a very tall and athletic Texas A&M team. But we had different players make a huge contribution on the defensive end. Karli Seay was just all over the place. There was a huge play by Jalin Cherry drawing that charge; I thought that was key for us. Just different players doing different things, even when we got in foul trouble in the first half. We had gotten in foul trouble Tiara, Awa (Trasi) and Faustine (Aifuwa). I thought our bench came in and really did a nice job staying steady, although we lost the lead and weren’t able to maintain the lead, it was good to have those minutes for them, so it’s a valuable experience for them as they’re moving forward.”

On trying to find rhythm on offense…

“Yeah, it’s hard to do that when you know what you’re able to do and when you have Faustine and Awa in the game. For them to now be out of the game and we’re going with a smaller lineup with four guards and a freshman. That’s going to throw the rhythm off of any team, and we knew that we were capable; it was just a matter of can we stay and keep that group on the floor, and we tried to as long as we could. This game is a 40-minute game and we knew that Texas A&M wasn’t going to go away, but neither was LSU.

On the end of regulation…

“You want your two best players in the mix. We talked about before the game, how, there’s a quote that Michael Jordan was talking about how many shots he’s missed. Over 9000 shots that he’s missed and over 300 games that he’s lost and there were 26 times that he had an opportunity to win the game, and he failed. Through all of those attempts and through all of that failure, that’s how he became successful. And I think that’s what we were able to do in game late; we might not have been making those easy shots or scoring, but you got to keep going at them and you got to keep trying. To me it’s about the courage too for Khayla to play downhill for Faustine (Aifuwa) on that roll, and get herself in a position because we knew that they were going to collapse on Pointer, and Pointer being handy enough to deliver the ball to Faustine who finished right there at the rim, that was critical for us moving forward.

The Tigers will head to Columbia, Missouri to take on the Missouri Tigers on Martin Luther King Jr. Day. The matchup will be televised January 18 on the SEC Network at 6 p.m. CT. As always, you can listen to the Voice of the Tigers, Patrick Wright, broadcasting on 107.3 FM in Baton Rouge.