Tigers Bring The Energy, Have Fun in Complete Win Over Arkansas 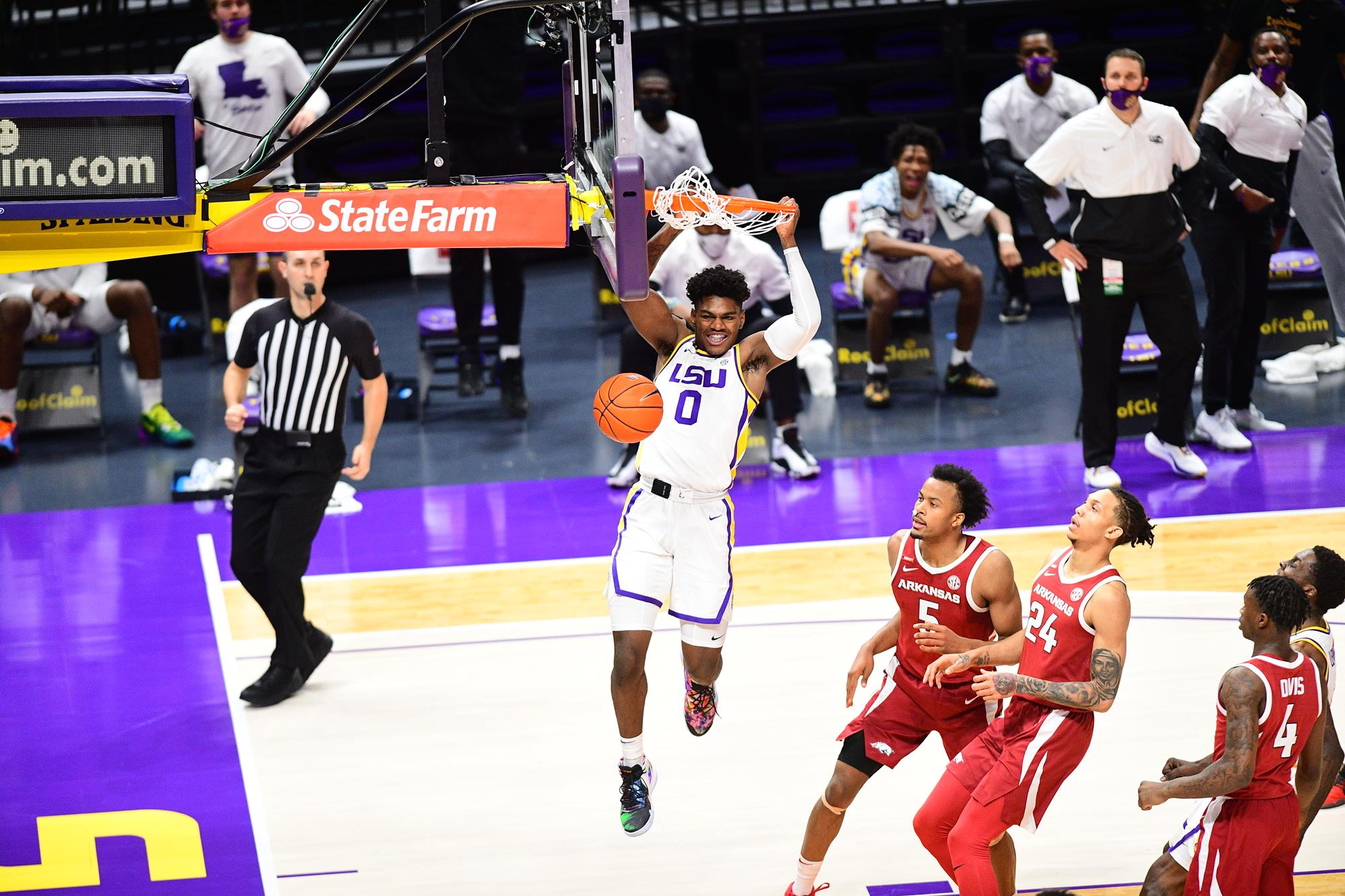 Will Wade had a message for his team after Saturday’s win over Ole Miss: keep moving forward. No steps back. And as the Tigers took another step forward — a big step — Wednesday night against Arkansas with a convincing 92-76 win at the Pete Maravich Assembly Center, something felt different about the victory.

Yes, it was as balanced of a scoring effort as LSU’s had all season. Yes, a conference win is always big. Yes, it was perhaps the Tigers’ most dominant performance all season, a blowout win over a Quad One foe.

But most importantly, it was fun.

They’re having a blast.

“Everybody is just having fun,” said Darius Days. “I feel like everybody’s effort is phenomenal. The bench was crazy. Guys were yelling and screaming. Everybody has great energy. That’s what it takes to win and get up big.”

Energy and body language, specifically, are something Wade monitors very closely. It’s been a common theme in LSU’s last two victories. In order to be a championship-level team Wade believes they can be, the energy can’t just come from the floor, but also from the bench, and both worked in perfect harmony Wednesday night.

All five starters for the Tigers finished in double figures. Trendon Watford led with a game-high 23 points and 10 rebounds, Darius Days posted 18 and 13, Cam Thomas finished with 17, Javonte Smart with 13 and Mwani Wilkinson finished with 11. Joe Brady would be proud, because everybody was eating.

“Everybody was eating,” said Days. “When we do that we go on great runs. We have great defense. When we get out and run in transition, everyone out there is happy.”

The team is full of leaders. One just happens to be a freshman. Thomas, who was questionable to play with an ankle injury suffered against Ole Miss, showed up and was a full-go in practice Tuesday when the coaching staff expected him to be limited.

Wade expected Thomas would do some shooting and dry offense in practice, but Thomas participated in everything. Wade would wager there aren’t five freshman in the country that would do that. Thomas is as focused and committed as anybody to come through the program, his coach says, and even at 19 years old, he’s winning over his teammates and coaches as a result.

“He is an absolute warrior,” Wade said of Thomas. “This kid is special. He did everything (in practice) yesterday. He loves to ball, he loves to be around his teammates. Our team loves him and respects him. His respect went through the roof after what he did in practice.”

Heading into tonight’s contest, LSU was still searching for back-to-back complete wins. Wade knows how far this team can go, but he’s been looking for some consistency in recent weeks. He got a taste of consistency tonight, but now it’s time to keep stacking these performances.

“We talked about playing with focus back-to-back and becoming a consistent team,” Wade said. “We’re not there yet, but we’re certainly a lot better off now then we were a week ago.”

It’s still early, and there’s plenty of basketball left to be played, but Wade feels something special with this team. He doesn’t know how this season will end, but he does know they’re as connected and together as they’ve ever been since he’s been in Baton Rouge.

“We can go as far as we want to go,” said Watford. “I say that with 100% confidence. We’re finally taking a turn and turning it up a notch. We’re going to score the ball. That’s one thing we know we’re going to do for sure. The next step is locking in defensively, which I think we’ve done the past two games.”

“We’ve got a great group,” added Wade. “I haven’t had this much fun coaching a team since I’ve been here. I don’t know where it’s going to lead, but we’ve got great, great people. We’re starting to come together. I’m very excited.”