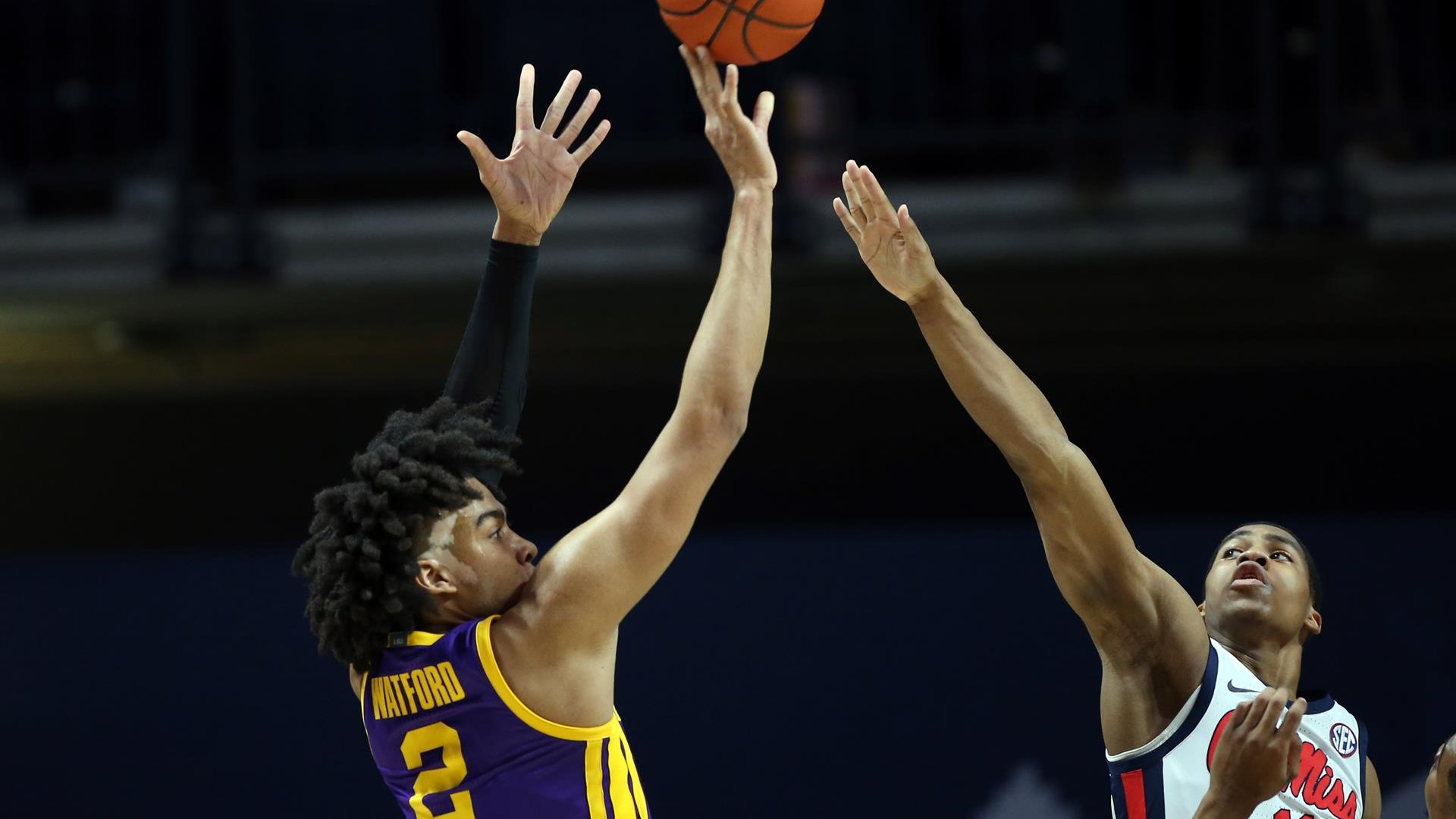 LSU is now 8-2 on the season and 3-1 in the Southeastern Conference as LSU won for the third straight year in The Pavilion Ole Miss falls to 6-4 and 1-2 in the league.

The Tigers showed no ill effects from having to make a quick schedule adjustment when the league announced on Friday that LSU’s trip to Missouri for a Saturday night game was postponed because of league Covid issues at Missouri. South Carolina’s game at Ole Miss was also postponed because of Carolina’s Covid issues so the league paired LSU and Ole Miss, moving the Tigers Feb. 17 game to this Saturday.

Coach Wade and staff sped up their process and used what time there was for some extra preparation and the Tiger team responded with a spirited performance and didn’t let an early injury to leading scorer Cameron Thomas bother them up bit.

It took less than three minutes for LSU to build an 11-2 advantage with Trendon Watford hitting two threes, Darius Days another long-range shot and Mwani Wilkinson getting a second chance bucket. That forced the first of three timeouts that Ole Miss would call trying to cool the Tigers off.

The Tigers continued to push forward to as much as a 23-point advantage on an Aundre Hyatt field goal that made it 65-42 with 5:50 to play.

Watford had 21 points to lead LSU to go with six rebounds, two assists and two steals. Watford showed his free throw shooting in the Georgia game was a one-off as he made all-five of his free throw attempts. Smart dropped in 17 points to go with six assists, while Days with 15 points and a team high seven boards. Gaines off the bench played and had 10 points, 2 assists and four steals.
.
LSU 48.2 percent over for the win (17-of-48) with eight treys and 13-of-16 at the line. LSU out rebounded Ole Miss, 35-32, and had a huge 29-14 advantage in points off turnovers as the Tigers forced Ole Miss into 20 miscues.

Thomas injured his ankle on his first three-pointer of the game. He tried to return later in the first half but came out shortly there after. Coach WIll Wade said in his post-game media zoom that he suspects that the freshman will be questionable for Wednesday’s game with Arkansas.

Austin Crowley off the bench was the only Ole Miss player in double figures with 10 points as top players KJ Buffen and Devontae Shuler were a combined 0-of-10 from the field and scored five points between them.

LSU now is scheduled to play three-straight home games at the Maravich Center starting Wednesday night at 6 p.m. against Arkansas.