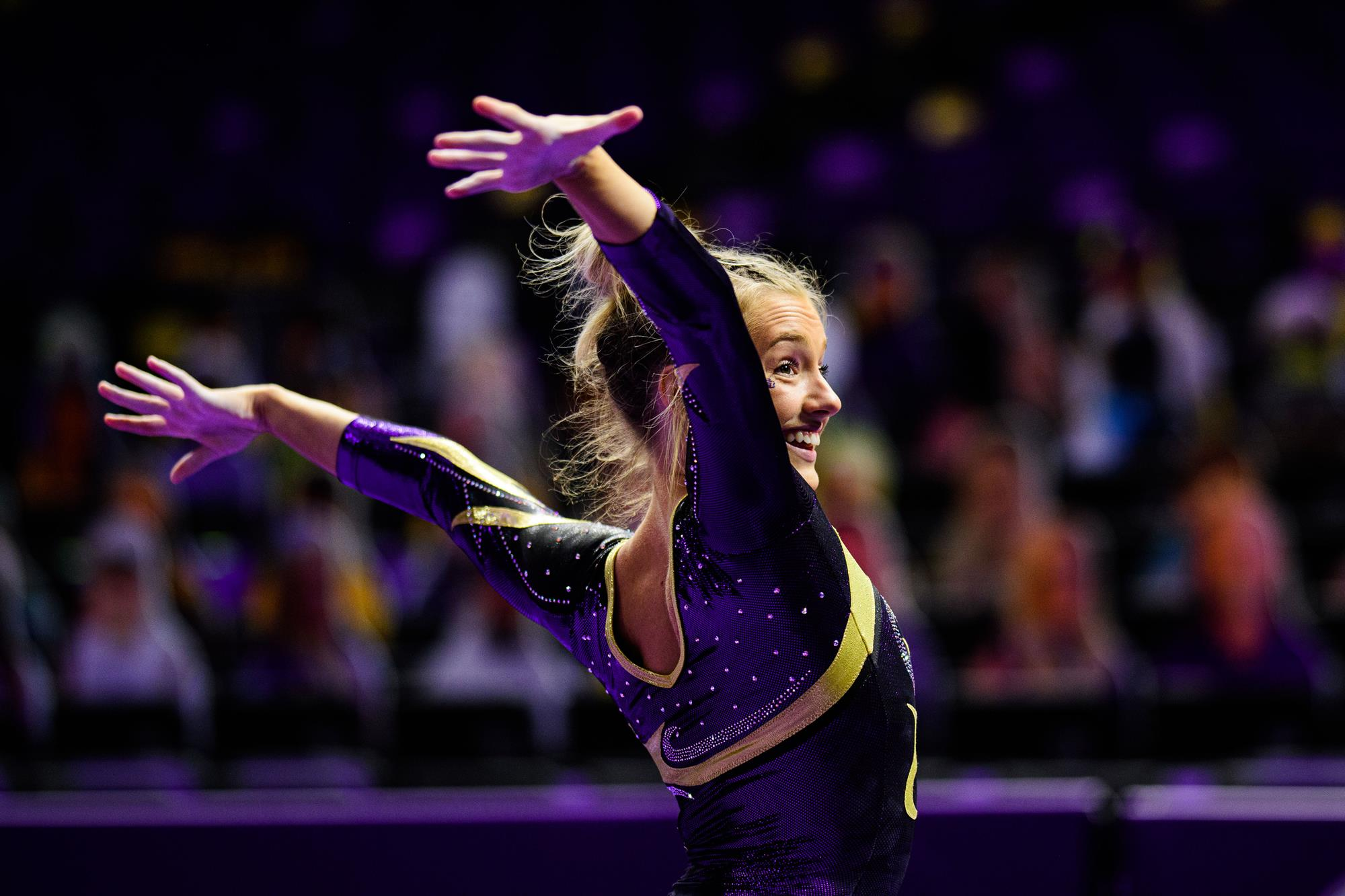 When Jay Clark was elevated to head coach in August, he fully understood the shoes he was filling.

Even as a 30-year veteran of college gymnastics, he probably would’ve doubted you if you told him he’d be LSU’s third head coach in school history. But his excitement was short lived. It quickly turned to excitement about the team. And it has to be if you’re going to replace a legend.

His first season will be one unlike any other. Lots of things will look different, but many aspects will remain the same. A new head coach. A different looking PMAC. A sense of accountability outside of the gym to allow meets to happen inside of it. It’s a challenge that, from what it seems, everybody has been excited to take on.

Ready to be back in the PMAC on Friday night ?? pic.twitter.com/4xrdnPm4e2

“We had an accountability within each other,” said senior Sarah Edwards on the offseason work. “I feel like we’ve been in the best shape we’ve been in, honestly. It was difficult (with COVID-19 precautions), but because you had your team rally together, it was also fun.”

“As a senior class, we’ve met and talked about what we want the team’s identity to be, the culture we’ve been brought up in, and the legacy we want to leave behind,” Edwards added about the senior class. “Everybody’s on board and we all have the same end-goal in mind.”

Even as a sophomore, it’s clear the team also looks to SEC Freshman of the Year Kiya Johnson as a leader with a year under her belt. Her first season in Baton Rouge was cut short, and didn’t end how she expected, but she’s been working to improve in all aspects in Year 2.

“My main thing has been trying to lead by example, to be more vocal,” Johnson said, “I do better leading by example, doing my best, and hoping that it encourages everybody else.”

Leading by example, she did. And if she doesn’t become the vocal leader she wants to be, it might be okay, because her performances speak volumes. Johnson finished the 2020 season with 22 event titles, three All-America honors and multiple SEC Gymnast and Freshman of the Week honors, owning career highs of 10 on vault and beam. She’s a superstar.

Clark has said all along that he believes the Tigers are probably a week or two behind where the team would like to be in a “perfect scenario.” But nothing about this season will be perfect. That’s a given. If you’re asking if they’re ready to compete, that’s something Clark can answer with complete certainty: LSU is ready to go.

The staff is also really excited about the depth that this year’s team brings, and that’s in part thanks to the talented freshman class they assembled. It’s depth they’ve needed the past couple of years. The class of Elena Arenas, Olivia Dunne, Haleigh Bryant, Chase Brock and Sierra Ballard can all do all four events, which creates more numbers and a competitive environment in practice.

“I think that’s the biggest difference between this year and last,” Clark said. “By the time we got to this point last year, we were walking a tightrope from a health perspective. We didn’t have many options beyond the six or seven in each event. I think this freshman class has provided us with more options and more depth that should give us a little bit more survivability.”

With a “larger-than-life” personality like D-D Breaux not in the building as much anymore, things could feel very different around the LSU facility. But from a philosophical point of view, Clark hasn’t noticed much of a change in the way the program goes about things on a daily basis.

“I’m obviously really grateful for the opportunity that’s been given to me by LSU,” Clark said on being named head coach. “It’s really been seamless, in terms of a transition, for all of us. It doesn’t feel like an awful lot is different in terms of day-to-day operations.”

Ashleigh Gnat‘s addition to staff has brought stability, too, making that transition as seamless as it could be. As a 17-time All-American, Gnat brings relatability and wisdom that are invaluable to the program. It’s already paying early dividends.

“The addition of Bugs (Ashleigh Gnat) to the coaching staff has helped with the transition,” said Edwards. I remember when I went on my official visit, I stayed with Bugs. It’s awesome having her as a coach as someone who’s been there and knows what it’s like to have a hard preseason. I enjoy having her perspective.”

With an ever-changing landscape in collegiate athletics, the Tigers can’t get too far ahead of themselves. What they know is where they are right now. The biggest thing for Clark has been trying to produce some sense of normalcy within the confines of the program, which keeps morale up, while also adhering with the guidelines and policies necessary for competition.

“This fall, if anything, has taught me that I’m a planner by nature,” Clark said. “This fall has beat me to death. We do have contingency plans. We talk through that. This whole thing has been about trying to stop the wind from blowing in a lot of ways. We’re no different than anybody else.”

Ready to get back in the PMAC on Friday night! Read up on the new things for 2021.

When the Tigers enter the PMAC on Friday at 7:15 p.m., they’ve made it clear they intend to bring their own energy.

It will look different, and it will sound different, but the goals and expectations never waver.

“I think we’ve had success in the gym with bringing our own energy,” Edwards said. “We know that’s going to be crucial if there aren’t 13,000 people in the stands.”